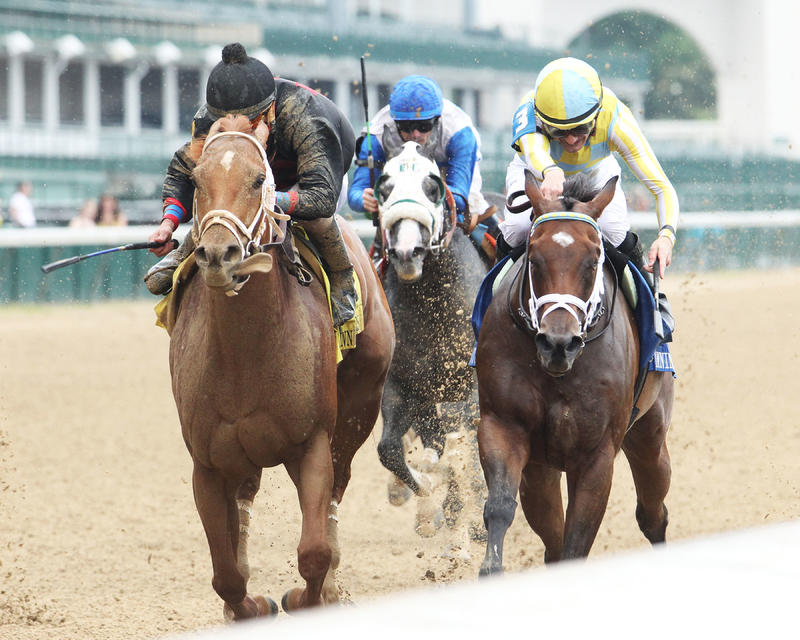 Diva Express (right) and I'm A Looker (left) - dead-heat winners of the Grade III Winning Colors at Churchill Downs - could meet for a third consecutive race in Saturday's Roxelana Overnight Stakes. Both were entered, but I'm A Looker could opt to run in the July 2 Princess Rooney (GII) at Gulfstream Park. (Coady Photography | Churchill Downs) 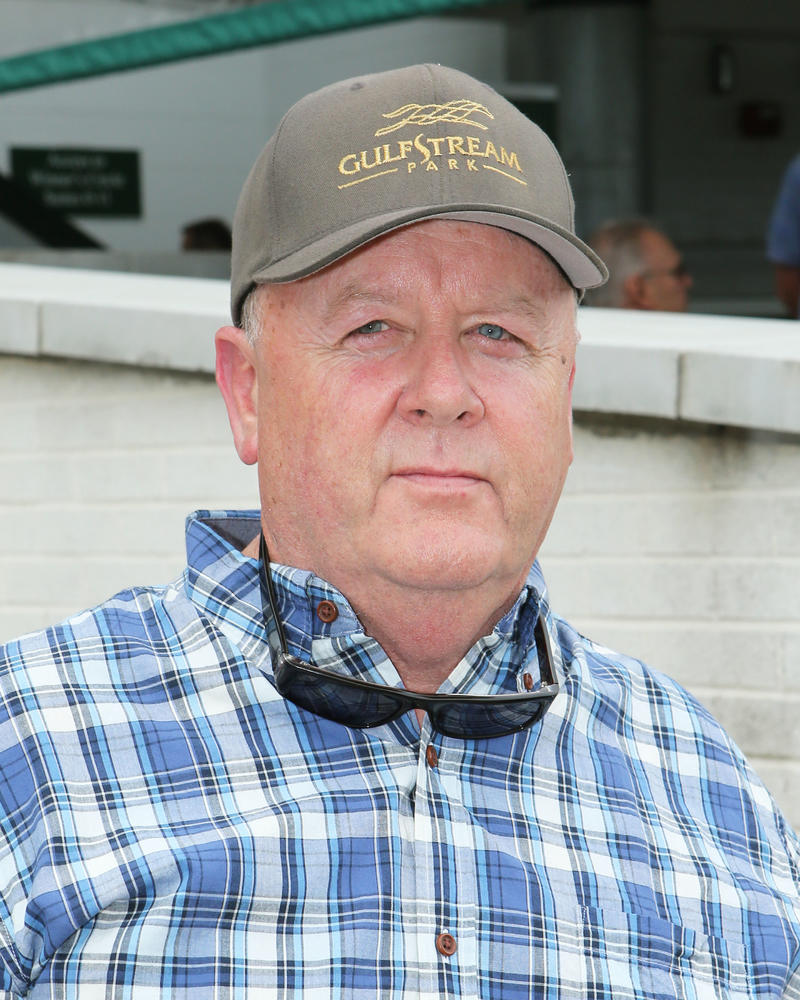 Trainer Pat Dupuy said he is "50-50" over whether to run I'm A Looker in Saturday's Roxelana Overnight Stakes at Churchill Downs or ship to Gulfstream Park to compete in the $250,000 Princess Rooney (GII) on July 2. (Coady Photography | Churchill Downs) 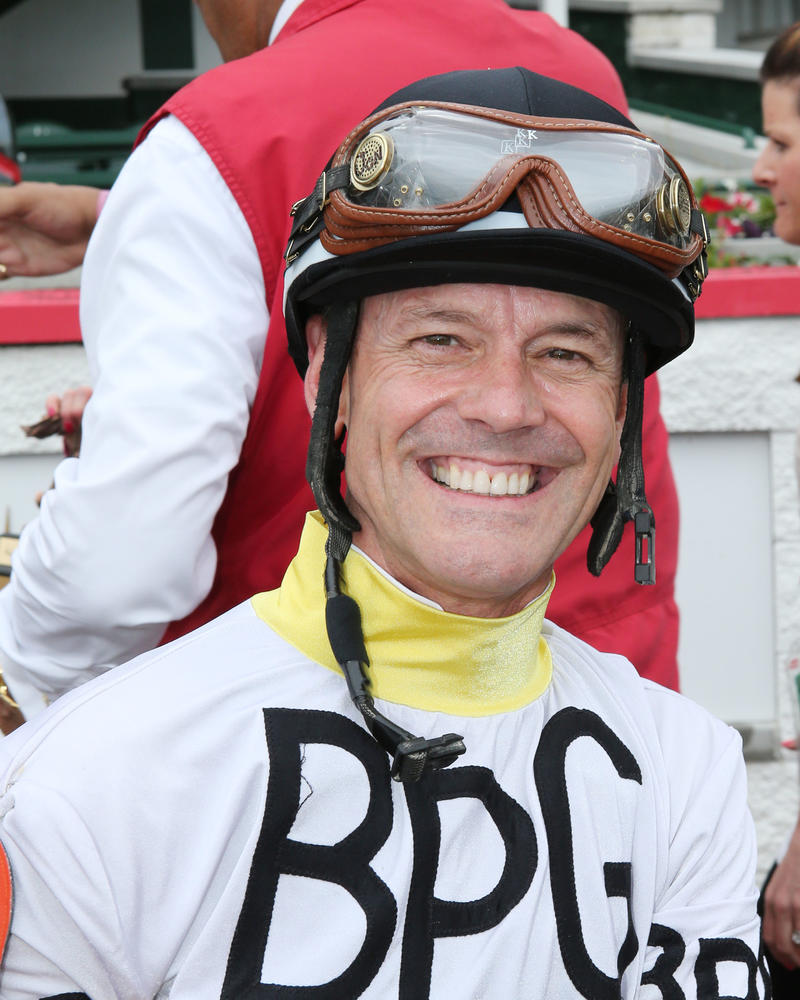 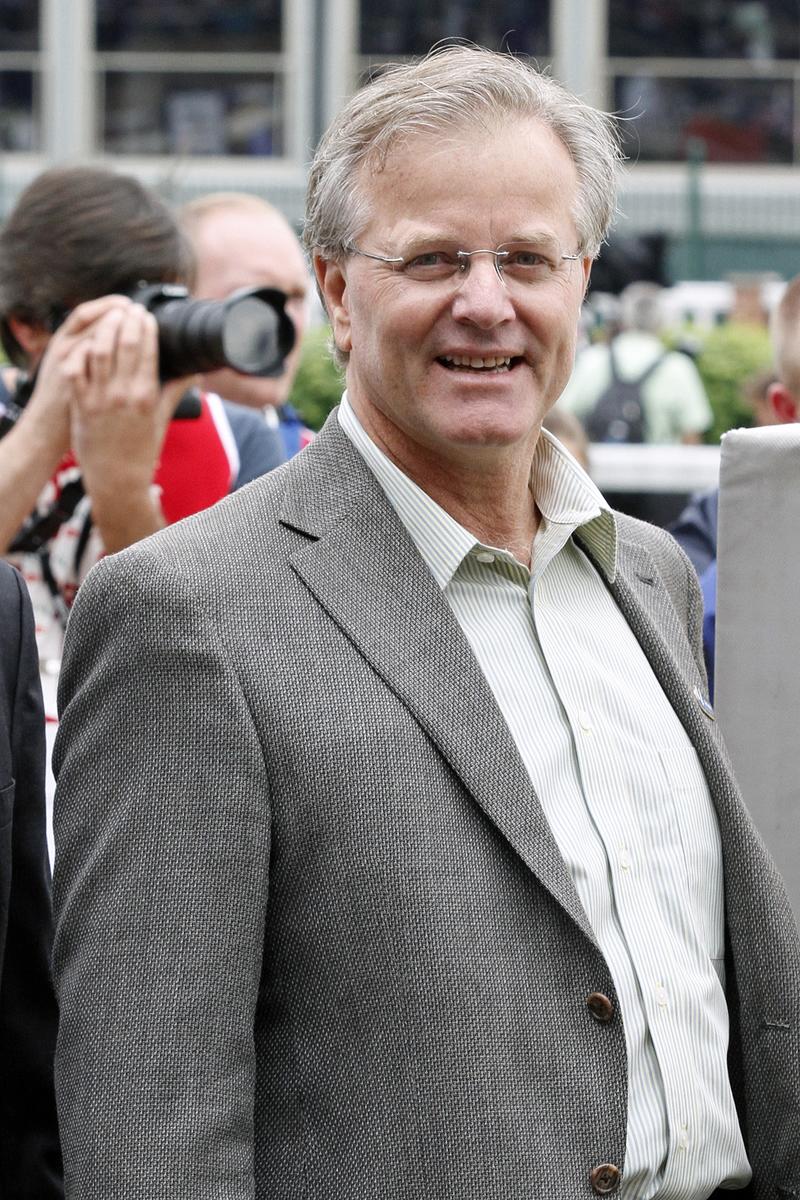 Hall of Fame trainer and all-time Churchill Downs win leader Bill Mott is just six wins away from his 700th career victory at the home of the Kentucky Derby. (Churchill Downs)

John Oxley’s Diva Express will attempt to make it three in a row when she takes on nine other fillies and mares in Saturday’s seventh running of the $67,000-added Roxelana Overnight Stakes at Churchill Downs.

Breaking from post 6, the 4-year-old daughter of Afleet Express will be piloted by jockey Julien Leparoux and is taking a drop down in class after winning her first graded stakes in the Winning Colors (GIII) on May 28, when she dead-heated with I’m a Looker, who also is entered in Saturday’s race.

“Race-wise, we might be taking a step back but we’re running up against some good horses,” said Norman Casse, assistant trainer to his father Mark. “She really likes Churchill which is why we figured we would stay home and run here one more time. I think it’s kind of neat that we have this little rivalry with I’m a Looker and she’s just a horse that we’ve figured out what she wants to do and she’s just doing really well right now.”

In five career starts over the Churchill Downs main track, Diva Express boasts a record of 5-3-0-0. Prior to her Winning Colors triumph, she won an allowance race on May 3 by a head over I’m a Looker and rounded out her 3-year-old campaign winning against the same caliber on Nov. 19 by 4 ¾ lengths. The Roxelana is run at a distance of six furlongs, where Diva Express is a perfect 2-for-2.

“Anything further than that is probably at her max, but six furlongs is definitely her best distance,” Casse said. “I think we’re bringing a horse that’s doing really well. We knew who was going to be in the race and I don’t worry about that. I think that it’s cool that they (Diva Express and I’m a Looker) could run against each other again, but I know that our horse is doing really well and really likes this racetrack. She’ll be tough to beat regardless.”

I’m a Looker, who shared the Winning Colors victory with Diva Express, could scratch from the Roxelana and point to the $250,000 Princess Rooney (GII) at Gulfstream Park on Saturday, July 2. Trainer Pat Dupuy says that the 4-year-old daughter of Henny Hughes is “50-50” between the two races.

“(Gulfstream Park) called up and said they would pay the plane’s way down and all entry fees,” Dupuy said. “She ran down there last year. I still have to call up the owners and see where they want to go. She runs her race every time. I wouldn’t be scared.”

Should Dupuy opt to keep her at Churchill, she will be ridden by Robby Albarado, who guided her to a Winning Colors victory.

The Roxelana honors the crack female sprinter who won seven of 11 starts and $264,726 between 2000-03 for owner/breeder William Landes III and trainer William “Blackie” Huffman. It will go as Race 10 of 11 on Saturday at approximately 5:21 p.m. (all times Eastern). Saturday’s first race is scheduled for 12:45 p.m.

COURT TO MISS REMAINDER OF MEET WITH BROKEN RIBS – Veteran jockey Jon Court will miss the remainder of the Churchill Downs Spring Meet after suffering two broken ribs in a water skiing accident Tuesday, according to agent Steve Krajcir.

“We’re hoping to be back sometime at the beginning of the Ellis Park Meet,” Krajcir said. “We’re taking it day by day.”

Court, 55, was named on five mounts Thursday and two on Friday.

DOWN THE STRETCH – Thursday’s 20-cent minimum Single 6 Jackpot Carryover on Races 3-8 has reached $622,389. The Single 6 Jackpot will be paid only if there is a single winning ticket, but 90 percent of each day’s betting pool is returned to bettors when there are multiple tickets. … With seven racing dates left at the Spring Meet, Mark Casse and Mike Maker are tied atop the trainer standings with 18 wins apiece. Steve Asmussen, the record 17-time champion trainer who led all trainers with four wins last week, is third with 12 victories. Maker is a five-time Churchill Downs leading trainer. Casse is attempting to land his first Churchill Downs training title since the 1988 Spring Meet. … Florent Geroux led all riders with six wins last week, and he sits third in the Churchill Downs jockey standings with 29 wins behind 10-time Churchill Downs champion jockey Corey Lanerie (46 wins) and nine-time local leader Julien Leparoux (34). … Churchill Downs’ all-time leading owners Ken and Sarah Ramsey remain in their familiar position atop the owner’s standings with a 12-7 lead over John C. Oxley. The Nicholasville, Ky. residents are in pursuit of their record-extending 26th local title ... Channing Hill has two mounts Thursday in an attempt to collect his 1,000th career win. He rides Winkatdawat in Race 6 (7:25 p.m. ET) and Bro Stroll in Race 8 (8:23 p.m.). … Lanerie needs one win to tie Charlie Woods Jr. for seventh on the list of Churchill Downs’ all-time leading riders. The Top 10 (with wins; note: * = active): Pat Day (2,482), Calvin Borel (1,189), Robby Albarado (1,083*), Don Brumfield (925), Larry Melancon (914), Jim McKnight (883), Woods (757), Lanerie (756*), Leparoux (741*) and Shane Sellers (738). … Brian Hernandez Jr. is 11 wins from becoming only the 20th jockey to ride 400 winners at Churchill Downs. … Hall of Fame trainer Bill Mott is six wins from his record-extending 700th Churchill Downs victory, but Dale Romans is closing fast on the all-time local win leader. The Top 10 all-time leading trainers at Churchill Downs: Mott (694*), Romans (670*), Asmussen (577*), D. Wayne Lukas (516*), Bernie Flint (469*), Tom Amoss (426*), Greg Foley (387*), Kenny McPeek (376*), Angel Montano Sr. (361*) and Dave Vance (344*). … Al Stall Jr. needs one win to become just the 34th trainer to collect 200 wins at Churchill Downs. He has no starters on the Thursday and Friday cards but has four entered Saturday: Miss Bortolazzo (Race 1), Majestic Heir (Race 3), Care (Race 7) and Stradivarius (Race 10). … Pioneer Justice, a 4-year-old gelding owned and trained by Ignacio Correas IV, has a chance to become the first three-time winner at Churchill Downs’ Spring Meet in Thursday’s fifth race (6:56 p.m.). … Churchill Downs will honor a select group of its veteran trainers after the races on Friday: horsemen that are at least 70 years old and have consistently stabled at Churchill Downs for the past 25 years. Those veteran trainers are Charles “Scooter” Dickey, William “Jinks” Fires, Bernie Flint, Forrest Kaelin, D. Wayne Lukas, Angel Montano Sr., Carl Nafzger, Ernie Retamoza Sr., Marty Rouck, Merrill Scherer, Gary Thomas, Dave Vance and Lynn Whiting. The invitation-only event for the trainers and their family and friends will be held Friday in The Mansion from 5-7 p.m. … Dial Me, the 2-year-old filly owned by the Churchill Downs Racing Club 2, will make her career debut in Friday’s sixth race at approximately 3:15 p.m. D. Wayne Lukas trains the Dialed In filly and James Graham is expected to replace the injured Jon Court in the irons for the 5 ½-furlong maiden special weight. … This Saturday’s “Inside Churchill Downs” on ESPN 680/105.7 from 10-11 a.m. will be co-hosted by Churchill Downs Racetrack’s Darren Rogers and Kevin Kerstein. They’ll preview the weekend action at Churchill Downs and around the country with special guests. … Saturday’s $500,000 Gold Cup at Santa Anita (GI) – part of the “Breeders’ Cup Challenge Series: Win and You’re In” – will be televised on NBCSN from 8-9 p.m. ET … Sunday is Family Adventure Day Presented by Kroger. Churchill Downs will have numerous family activities such as pony rides, inflatables, petting zoos, stick-horse races, face painters and more. Family Adventure Day tickets are just $8 when purchased online in advance at ChurchillDowns.com/Tickets, and $1 from each ticket will benefit Kosair Children’s Hospital. … Churchill Downs will close its 2016 Spring Meet with a bang on Saturday, July 2 as the Louisville racetrack hosts “Downs After Dark: My Country ’Tis of Thee – Presented by Stella Artois and Jack Daniel’s.” Guests are encouraged to wear red, white and blue, watch racing under the lights and enjoy the music of rising local country artists Wildwood on the Plaza Stage. The July 2 closing night card will begin at 6 p.m.