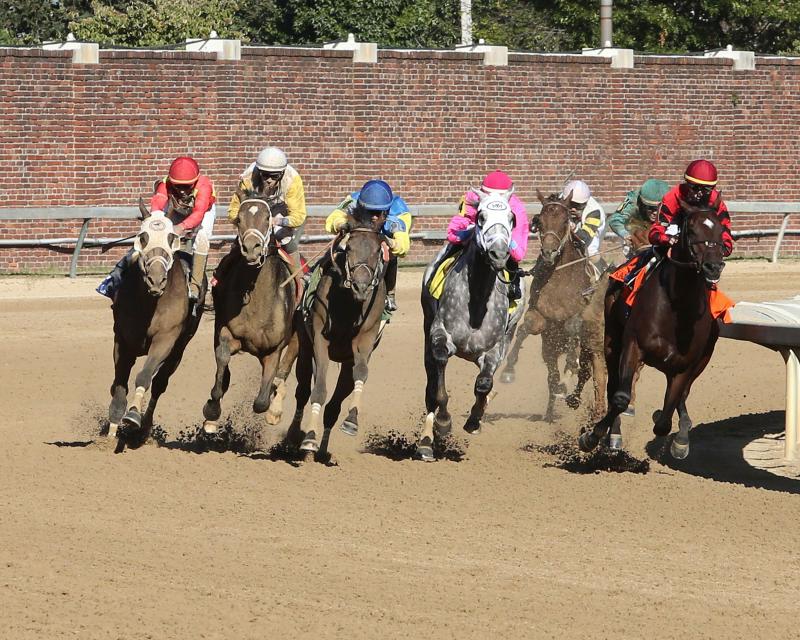 David A. Ross’ DAARS Inc.’s Honorable Duty (right), trained by
Brendan Walsh and ridden by Corey Lanerie, took command at the head of the stretch on his way to an easy victory in the fifth running of the $200,000 Lukas Classic (GIII). (Coady Photography, Churchill Downs)

Jockey Jose Valdivia Jr. returned to the G.H.. Mumm Winner's Circle aboard Carolyn Wilson’s The Tabulator following the victory by the Dialed In colt in Churchill Downs' $150,000 Iroquois (GIII), the first race on the 2018 "Road to the Kentucky Derby." (Coady Photography, Churchill Downs) 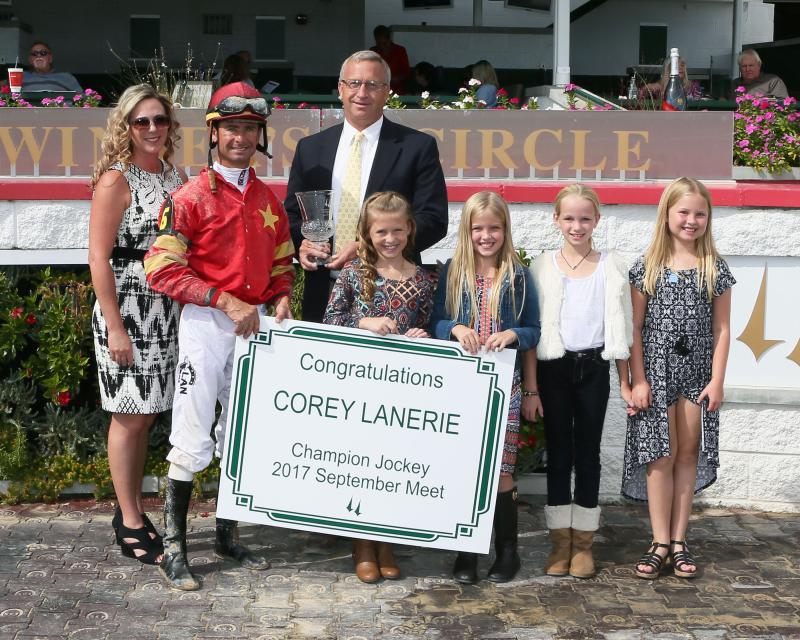 Jockey Corey Lanerie was joined by family and friends and Churchill Downs Track Superintendent James Richardson the celebration of his September Meet riding crown. Lanerie was aboard a meet-record 25 winners and earned his 14th riding title in the track's past 16 meets. (Coady Photography, Churchill Downs) 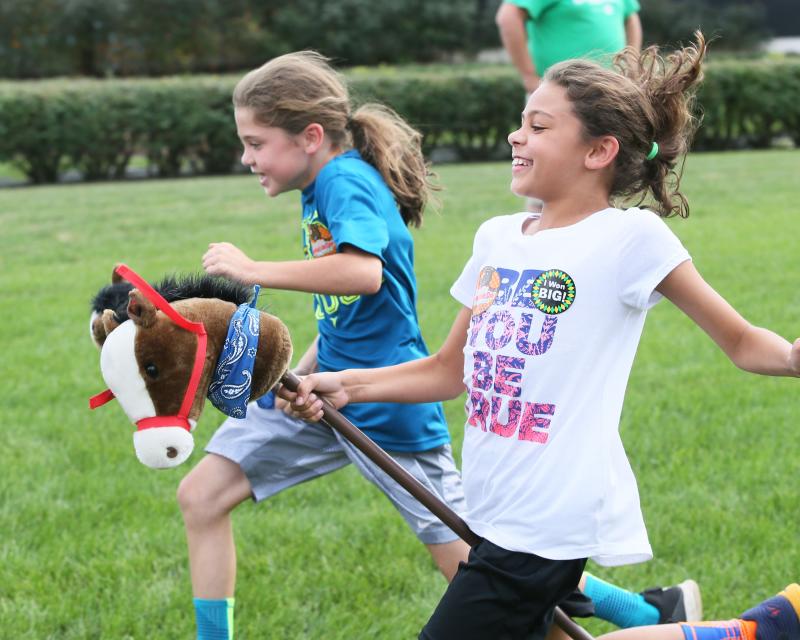 Young fans ran to the the finish in one of the stick-horse races on the Matt Winn Turf Course - one of the schedule of family-friendly activities during the Family Adventure Day Presented by Kroger on the closing day of the 2017 September Meet. (Coady Photography, Churchill Downs) 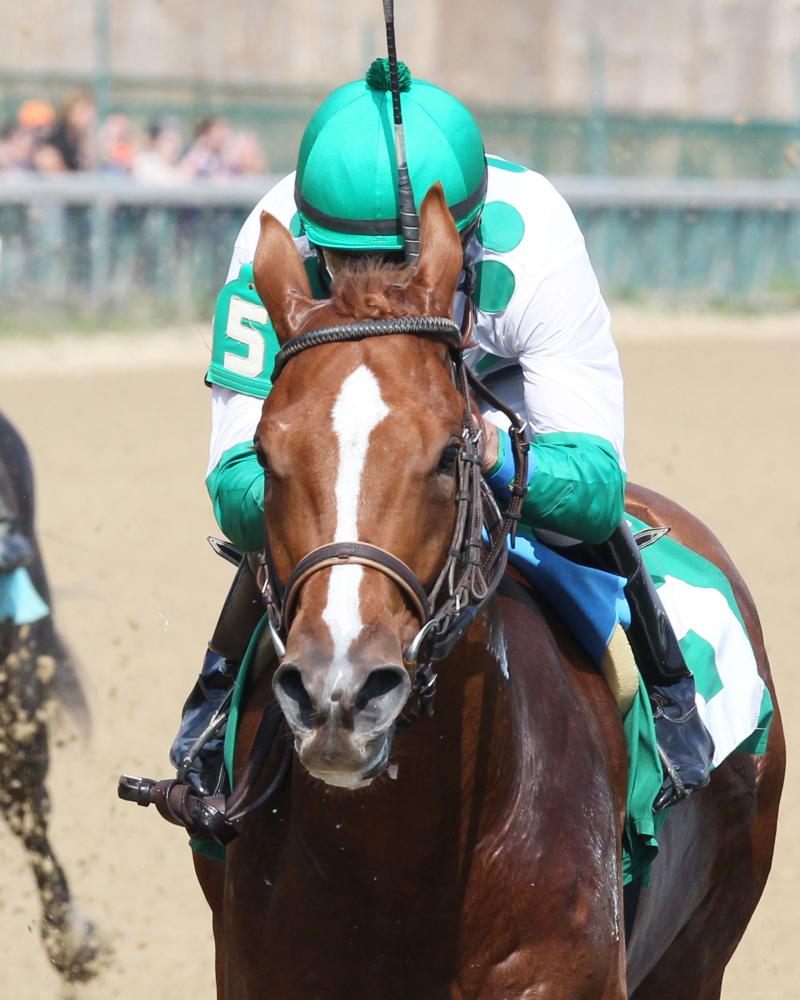 Highlights that surrounded the races on the dirt and turf course during the meet that opened Friday, Sept. 15 included the year’s final “Downs After Dark Presented by Stella Artois and Woodford Reserve” night racing celebration, a pair of popular “Twilight Thursday” gatherings that featured live music and local food trucks on The Plaza, and “Family Adventure Day Presented by Kroger” on a spectacular afternoon that included pony rides, inflatables, a petting zoo and other family-friendly activities on the meet’s closing day.

Although high temperatures were slightly above normal for the Louisville area during the early days of the meet, racing conditions were ideal throughout the 11-day sessions. The main track was rated “fast” every day of the meet and all scheduled turf races were run over a Matt Winn Turf Course that was listed as “firm.”

The comfortable autumn weather contributed to solid attendance throughout the meet that included a gathering of 15,317 for the lone “Downs After Dark” night racing session on Saturday, Sept. 23 and brisk business at the meet’s two “Twilight Thursday” celebrations of food, music and racing. The “Twilight Thursday” program on Sept. 28 attracted 5,367 patrons – the largest gathering thus far for one of the popular 5 p.m. racing programs during a September Meet.

The racing product remained strong throughout the 11-day session, fueled by strong and competitive race fields and the highest purse levels in the five-year history of September racing. Total purses paid during the meet rose to $4,692,000, an increase of 12 percent from the total of $4,189,000 in September of 2016. Both meets consisted of 109 races conducted over 11 days.

A total of 967 horses competed in the meet’s 109 races compared to the 931 that participated in the same number of races a year earlier. The average field for a 2017 September Meet race consisted of 8.9 horses, which was up from the 2016 average of 8.5. Both averages reflected a 3.9 percent increase from the previous year’s September session.

“Our September Meet has been a joy for racing fans, handicappers and members of our Churchill Downs team since its introduction in 2013, and the meet’s continued growth in its fifth year made the 11 days of racing and entertainment very exciting and satisfying,” said Kevin Flanery, President of Churchill Downs Racetrack. “Our team and horsemen were optimistic when the meet was introduced. Over its five years, the September session has provided both a strong racing product and an entertainment option that is now a highlight of the local and regional calendar at a time of year packed with attractive entertainment and sports options.

“Churchill Downs appreciates the ongoing and growing public support for September racing, and deeply values its partnership with horsemen that has resulted in the creation of a daily racing product that is attractive and entertaining to fans at our track and throughout North America who follow and support Churchill Downs racing via online and satellite wagering.”

One of the top equine performances of the meet came Sept. 30 with a victory by David A. Ross’ DAARS Inc.’s Honorable Duty in the fifth running of the Lukas Classic. Lanerie rode the Brendan Walsh-trained son of Distorted Humor who had finished second to Breeders’ Cup Classic (GI) contender Gun Runner in the Stephen Foster Handicap (GI) in June. The race is named in honor of four-time Kentucky Derby winner and Hall of Fame trainer D. Wayne Lukas.

Carolyn Wilson’s The Tabulator invaded from Chicago’s Arlington Park to win the $150,000 Iroquois (GIII), the opening race of the 2018 “Road to the Kentucky Derby” point system. Trained by Larry Rivelli and ridden by Jose Valdivia Jr., The Tabulator turned back favored Hollywood Star and earned 10 points for the victory in the point system that will determine the horses that occupy the 20 spots in the starting gate for the 2018 “Run for the Roses.”

The Iroquois is also part of the Breeders’ Cup World Championship’s “Win and You’re In Juvenile Division” Challenge and the victory earned the Kentucky-bred son of Dialed In a guaranteed spot in the starting gate for the $2 million Sentient Jet Breeders’ Cup Juvenile (GI) at Del Mar on Nov. 4. The colt’s $60,000 in starting fees will be paid by Breeders’ Cup Ltd. and he also earned a travel stipend for his journey to Southern California.

The $200,000 Pocahontas (GII) for 2-year-old fillies, which kicked off the 2018 “Road to the Kentucky Oaks,” saw a surprise result when Craig D. Upham’s Texas-bred Patrona Margarita scored a 3 ¾-length victory at odds of 23-1 for jockey Brian Hernandez Jr. and trainer Bret Calhoun. Patrona Margarita earned 10 points on the “Road to the Kentucky Oaks” in her second victory in three career races at Churchill Downs. Calhoun’s filly is not Breeders’ Cup-eligible, but could collect the entry fee and travel stipend for the 14 Hands Breeders’ Cup Juvenile Fillies (GI) earned by her Pocahontas victory should she be made a supplemental nominee.

Also on the Lukas Classic program, Live Oak Plantation’s homebred Awesome Slew edged The Player to win the 25th running of the $100,000 Ack Ack (GIII). The Mark Casse-trained son of Awesome Again was also ridden by Lanerie and is expected be entered to compete in the $1 million Las Vegas Dirt Mile (GI) on the Breeders’ Cup program on Friday. Nov. 3.

Lanerie continued his climb up the all-time jockey standings at Churchill Downs with a comfortable triumph in the race for leader rider of the September session. The native of Lafayette, La. earned 25 victories in collecting his 14th riding crown in the past 16 meets at the home of the Kentucky Derby. In doing so Larnerie moved into sixth-place in career victories at Churchill Downs, surpassing Jim McKnight (883 wins) to finish the September session with 886 career victories beneath the Twin Spires.

The win total broke Lanerie’s previous September Meet record of 19 victories and was highlighted by his stakes scores in the Lukas Classic and Ack Ack. The 42-year-old Lanerie also posted the meet’s best single-day performance when he guided five horses into the G.H. Mumm Winner’s Circle on Sept. 17.

Jon Court, Julien Leparoux and Chris Landeros were next in the September jockey standings and finished in a three-way tie with six wins each. Gabriel Saez also earned a stakes win aboard Bantry Farms LLC’s Grace’s Treasure, who won the $100,000 Open Mind via disqualification.

The battle for September’s Leading Trainer came down to the meet’s final race and ended in a deadlock between Brad Cox and Kenny McPeek, each of whom saddled seven winners during the 11-day session. The Louisville-born Cox saw his horses finish 7-5-4 from 29 starts for a win rate of 24 percent and an in-the-money rate of 55 percent. McPeek, who grew up in Lexington, Ky., saw his starters compile a record of 7-1-5 in 28 races – good for a win rate of 25 percent and his runners finished 1-2-3 in 36 percent of their races. The “Leading Trainer” honor was the first for Cox, who earned stakes victories during the meet with Klein Racing’s Pinch Hit in the $100,000 Dogwood (Listed) and Mr. Misunderstood in the Jefferson Cup, and the third for McPeek.

Mark Casse and Mike Maker finished in a tie for third in the trainer’s race with six wins each. The most significant of Casse’s victories was Awesome Slew’s triumph in the Ack Ack.

Ken and Sarah Ramsey pushed their record total for “Leading Owner” honors to 29 as five horses carried their red-and-white silks into the winner’s circle during the 11-day meet. The Ramseys surged late to edge Paul Fireman’s Fern Circle Stables by a single victory as the Nicholasville, Ky. couple pushed their all-time victory total at Churchill Downs to 474. Ahmed Zayat’s Zayat Stables LLC finished third with three wins during the meet.

There was little change during the September Meet in the ongoing battle for the distinction of all-time leading trainer at the historic track. Dale Romans became only the second trainer in the 143-year history of Churchill Downs to achieve 700 career victories when he saddled Robert J. Baron’s Promises Fulfilled to win a maiden race for 2-year-olds on Sunday, Sept. 17. But the victory was the only win of the meet for the Louisville native, who at meet’s end remained one win behind Hall of Famer and all-time Churchill Downs win leader Bill Mott. Mott did not collect a win during the meet.

Trainer Mike Tomlinson reached a career milestone on Sept. 30 when he saddled Michael J. Bruder’s Curlins Vow for a win that was the veteran conditioner’s 500th career triumph.

Fans of racing among purebred Arabian racing saw an upset in return of the $100,000 President of the United Arab Emirates Cup (Arabian Grade I) when Tom Fritz’s Quick and Rich rallied late to upset Easter Man and heavily-favored champion and defending winner Paddys Day. Jockey Joe Rocco Jr. was aboard Quick and Rich for eight-time Darley Award-winning trainer Lynn Ashby.

Churchill Downs will conduct its third and final live racing session of 2017 in its 21-day Fall Meet, which is scheduled for Oct. 29-Nov. 26. The upcoming meet will kick-off with first of two popular “Stars of Tomorrow” programs devoted exclusively to races for 2-year-olds accompanied by the opening day’s Family Adventure Day Presented by Kroger “Trick or Treat at the Track” celebration. 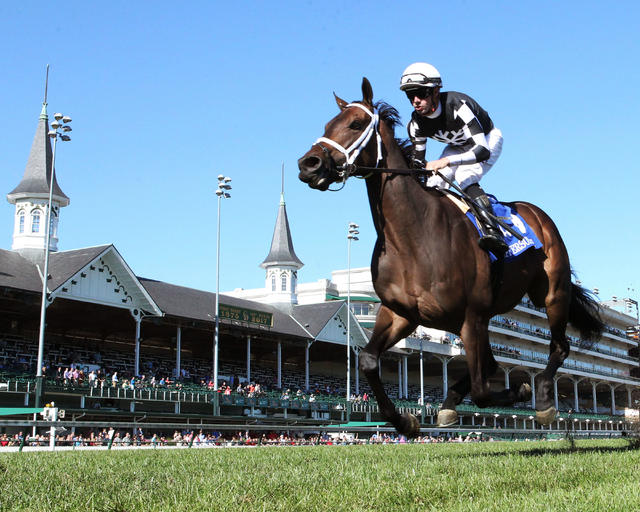