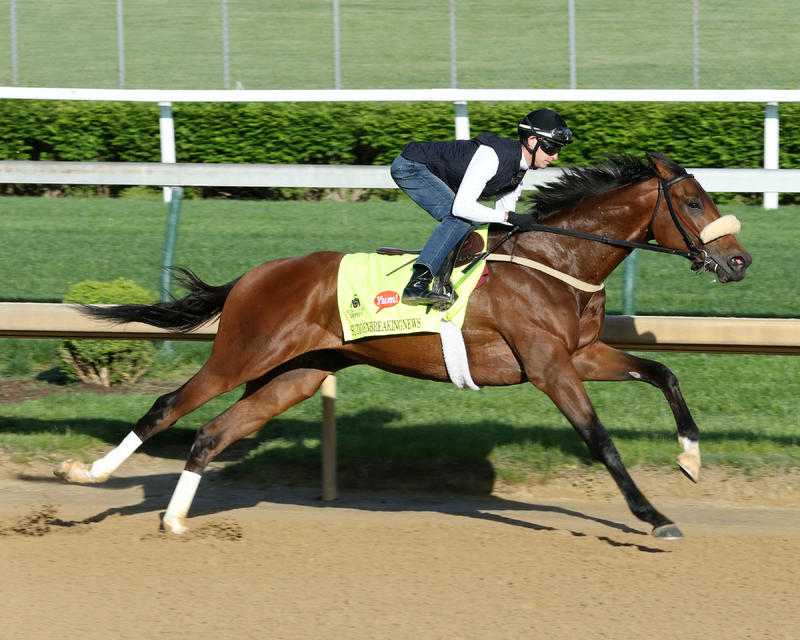 Suddenbreakingnews, 5th in the Kentucky Derby Presented by Yum! Brands (GI) and winner of Oaklawn Park's Southwest (GIII) worked a strong six furlongs Sunday at Churchill Downs. The Mineshaft ridgling, shown here in a work prior to his Kentucky Derby run, covered the distance over a fast track in 1:12.40 under jockey Joe Rocco Jr. (Coady Photography | Churchill Downs) 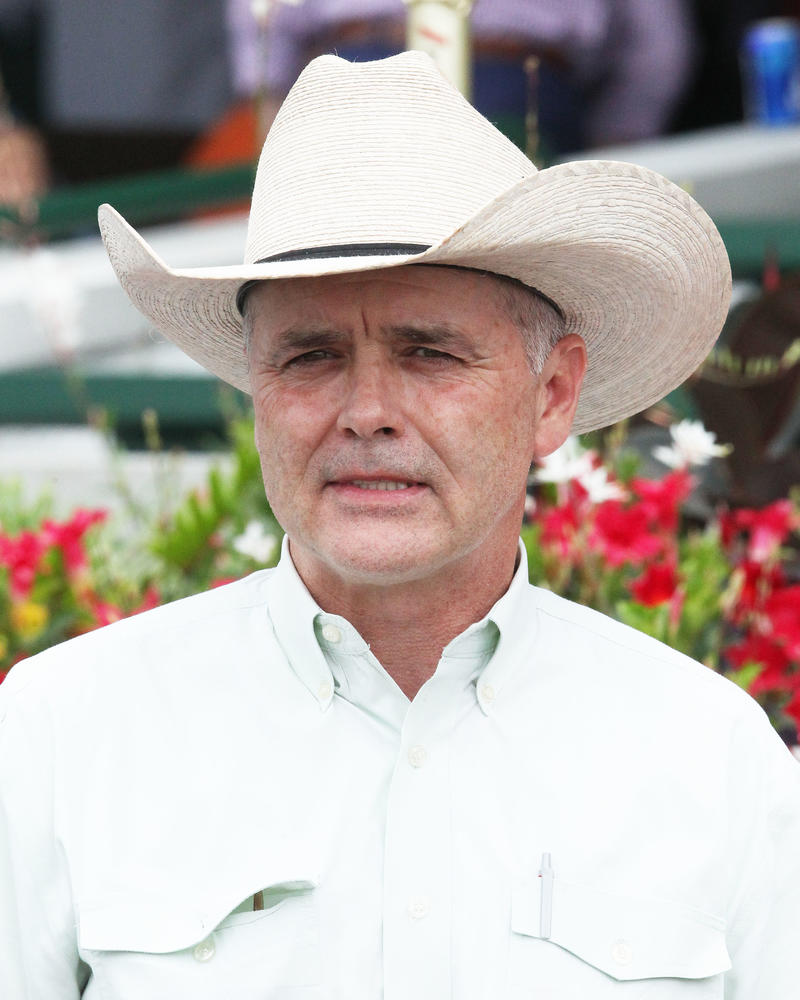 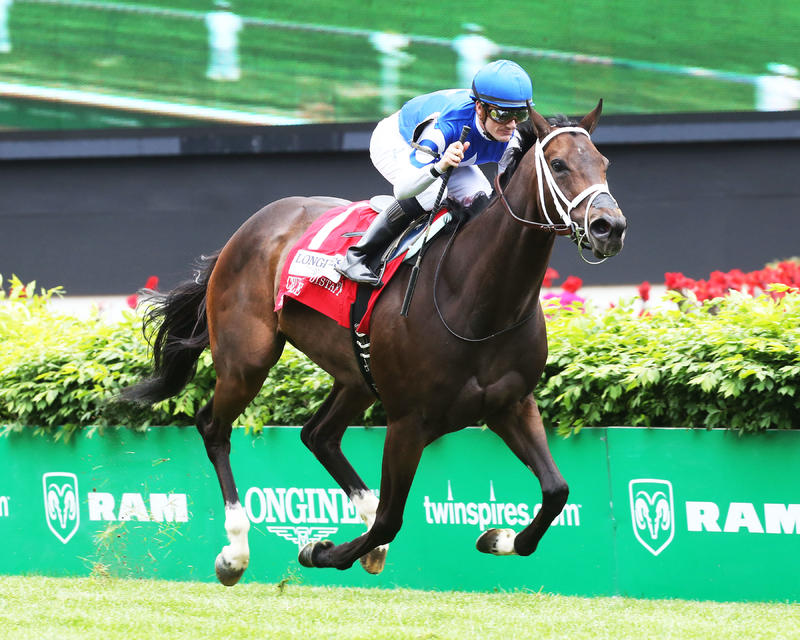 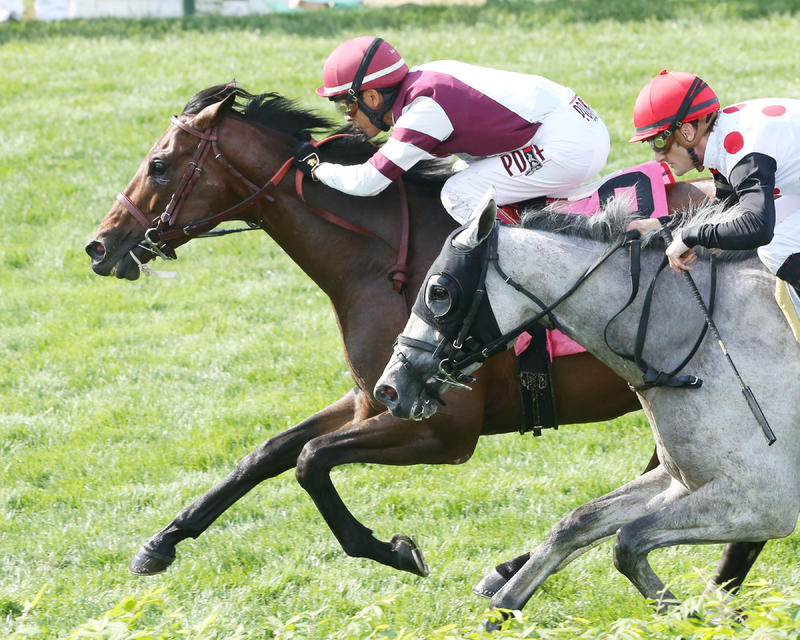 Divisidero, shown on the outside in his Kentucky Derby Day victory in the Grade I Woodford Reserve Turf Classic, breezed on Sunday at Churchill Downs in preparation for a trip to Belmont Park for a run in the Grade I Manhattan on the June 11 Belmont Stakes (GI) undercard. (Coady Photography | Churchill Downs)

Samuel Henderson’s Suddenbreakingnews, fifth in the Kentucky Derby Presented by Yum! Brands (Grade I), continued preparation for the $1.5 million Belmont Stakes (GI) on June 11 with a six-furlong breeze in 1:12.40 Sunday morning at Churchill Downs with Joe Rocco Jr. in the irons.

“I thought he looked good,” trainer Donnie Von Hemel said. “He went real smooth and picked up as he went, galloped out real smooth. Everything seems to be in order; it’s just what we’re looking for. I realize that the pace won’t be :45 in the Belmont, but we also won’t be 20 lengths back either. I just think this horse can run a mile-and-a-half – his pedigree says he can. I think it’s our best chance to get a Grade I is in that race.”

Listed as a gelding throughout his racing career, it was recently discovered through an ultrasound that Suddenbreakingnews had two undescended testicles in his abdomen. He will be listed as a ridgling when he runs in the Belmont Stakes.

“He looks like a gelding, he acted like a gelding and that’s the way it was,” Von Hemel said. “The ultra sound revealed that he had two undescended testicles so he looks like a gelding and we never had any other reason to think otherwise. He’s now an official ridgling. I think on the ultrasound they were rather small and with both of them being in his abdomen at this point I don’t think they would descend. The part of the testicles descending is the temperature of the sperm that’s alive so they’re too hot right now. A lot of time there’s one up and one down and there’s the question of if it’s tugging on him and it doesn’t seem to be a problem.”

Von Hemel had always been confident in the horse’s ability to perform at a high level, but never thought he would reach the level that he has.

“I think last fall he ran some nice races and he would have a chance to be a graded stakes type horse,” Von Hemel said.
“But I think he’s exceed that and being a trainer is all about managing expectations for your clients and for yourself and for your horses so you don’t over match them. In his case I think he can handle them. I think with 99.9-percent of the horses that don’t make it to the Derby, this is above anything you can hope for because it’s so difficult to get there. So any horse that makes it to that point with very few exceptions is exceeding what you could have hoped for.”

Von Hemel said that Suddenbreakingnews would likely ship to Belmont Park on Tuesday, June 7. Hall of Fame jockey Mike Smith, a two-time winner of the Belmont Stakes with Drosselmeyer (2010) and Palace Malice (2013), has the mount.

In other Belmont Stakes news, GMB Racing’s Mo Tom will bypass the third jewel of the Triple Crown and will point toward the $500,000 Ohio Derby and Thistledown on June 25.

DUPUY HAPPY TO GIVE I’M A LOOKER A FIRST GRADES STAKES WIN – Trainer Patrick Dupuy always believed that his 4-year-old filly I’m a Looker was one that would win a graded stakes race, but he just didn’t know when. Such a victory finally came on Saturday afternoon when she dead-heated with John Oxley’s Diva Express in the Winning Colors (GIII).

“Every time we lead her over there, she tries hard,” Dupuy said. “A couple of times she had an excuse but sometimes you just get outrun. You have to be realistic about it. I always thought she would get there and I had said that early on I didn’t know where it was going to be. When she almost won the Raven Run I thought it would be a good win but you got to take them race by race.”

Saturday’s race was the first dead-heat in a stakes race at Churchill Downs since Demarcation and Karelian hit the wire together in the 2008 edition of the River City Handicap (GIII).

“It would have felt better if she would have won by herself, but I’ll take it,” Dupuy said. “A win is a win. We’ll just sit back a couple of days with her and get her back going in about three or four days.”

The Winning Colors was the first graded stakes victory for Dupuy.

“We’ve been real lucky lately,” Dupuy said. “Another horse I had awhile back, Strike Impact, made over a half-million on the track so we’ve been very lucky to have had some of the success we’ve had these past couple of years.”

“I’ve had horses with them for about nine years now,” Dupuy said. “He (Chet) doesn’t tell me anything. He just lets me do my thing.”

I’m a Looker will be out to seek more stakes glory in her next start, which could come in wither the $65,000-added Roxelana Overnight Stakes at Churchill Downs or the $100,000 Chicago Handicap (GIII) at Arlington Park, both on June 25.

“She looked good (Sunday) morning,” Casse said. “We haven’t even discussed what we’ll do next with her. I just got off the phone with Dad and we’ll see how she trains. She’s pretty hard on herself so we’ll have to make sure she’s training well before we make any decisions. She’s strong and she runs fast. She breezes fast and gallops fast so I think a race like that might have taken a little bit out of her. She looked happy this morning regardless and we’d rather just wait and see how she trains.”

Casse was happy to share the victory with the connections of I’m a Looker.

“Truthfully I was thinking, ‘Man if we get beat I hope Jennie (Rees and trainer Patrick Dupuy) beats us,” Casse said. “So I was okay with the way things went and it was the perfect scenario because we got to share the victory with her but I was watching and I couldn’t believe how game she was. She just dug right back in. I was happy for everybody and the connections. She’s really hard, she’s a tough horse and I guess that’s translating even more in the afternoon now.”

The 4-year-old daughter of Afleet Express began her career on the turf and synthetic surfaces until a few starts back when she won an allowance optional claiming event at Churchill that was taken off the turf due to rain.

“It must have just been circumstantial,” Casse said. “We kind of got lucky last fall when they took the race off the turf. She was really good on the turf so she probably would have wound up staying on the turf but they took the race off. We left her in and she ran a really good race. She needed a little break after that so during the winter time she got some time off and looked better than ever.”

Diva Express had been training very well going into the Winning Colors, according to Casse.

“That was kind of the performance that we thought we would get with the way she was breezing and she didn’t disappoint,” Casse said. “That was a good little field. I thought they ran decent. We kind of ran everyone off their feet a little bit and held on, she’s just really good right now so hopefully we can move forward with her and keep getting better and better.”

Meanwhile, Casse’s champion turf mare Tepin is officially a go for a trip to compete at Royal Ascot in the Queen Anne (Group I) on June 14.

“We’re finalizing all the plans, but she’s on for Royal Ascot,” Mark Casse said via telephone. “We’ll give her one more breeze on Friday, but as long as she looks good, we’re going.”

DIVISIDERO BREEZES FOR MANHATTAN – Gunpowder Farms’ Divisidero, winner of the Woodford Reserve Turf Classic (GI) on Kentucky Derby Day, breezed a half-mile in :48.80 Sunday with Shaun Bridgmohan aboard. The son of Kitten’s Joy is on target for the June 11 Manhattan (GI) on the Belmont Stakes undercard.

“I let him two-minute lick the first part of a mile and then he breezed the last three-eighths,” trainer William “Buff” Bradley said. “The way he did it was very impressive and I was catching him in 11 and change down the lane. Shaun said, ‘Man, he really has a turn of foot,’ and I felt like that was a really good breeze for him. I’ll probably let him do something next Saturday or Sunday, nothing big.”

Divisidero would likely breeze this Saturday or Sunday and ship to Belmont Park on either June 7 or 8, according to Bradley. 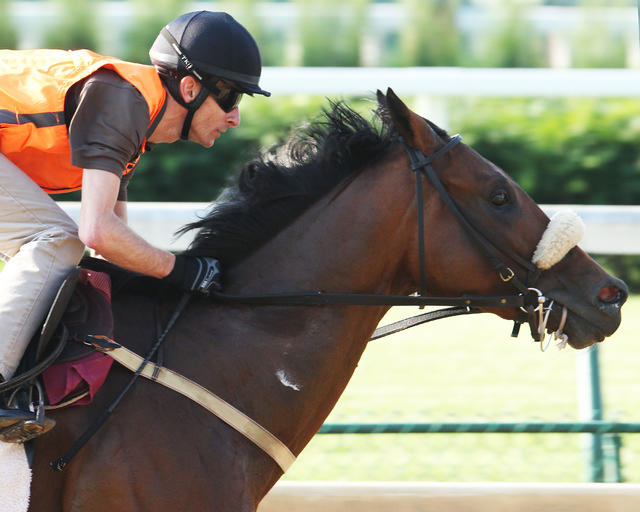