“I’m still going to consider him for all three races (Sprint, Dirt Mile and Classic),” Summers said. “I just want to keep my options open. The owners and I will come up with a plan but we are in a spot right now that we don’t have a ‘Win and You’re In’ entry for the Classic. That’s going to cost $150,000 to enter the race. While we’ve won a lot of money with the horse, it’s still a big chunk of change. I think we can definitely get the distance for the Classic; we proved that last night. We’re just going to have to wait and see.”

The son of Posse covered the Lukas Classic’s 1 1/8-mile distance in 1:48.64, which was just six-hundredths of a second behind Fort Larned’s 2013 stakes record of 1:48.58. Tyler Gaffalione rode the winner for Summers, who co-owns the horse with Shadai Farm, J Stables LLC, Head of Plains Partners LLC, M. Scott Summers, Daniel Summers and Michael Kisber.

“Is there another race for him today?” Summers joked. “He’s feeling good this morning. When he was cooling out in the Test Barn last night and he heard the (President of the UAE Cup) go off, he got puffed up and wanted to run again. We’re just lucky to be in a great spot with him and he’s doing well after the race.”

The Breeders’ Cup will be held on Nov. 2-3 beneath the historic Twin Spires of Churchill Downs for a ninth time.

Mind Your Biscuits will remain stabled in Barn 18 at Churchill Downs through at least the Breeders’ Cup, according to Summers.

Toast of New York, who competed for just the third time in nearly four years in Saturday’s Lukas Classic, is also slated to remain at Churchill Downs, according to trainer Jamie Osborne. The 7-year-old gelding’s Breeders’ Cup plans are still in flux, according to Osborne.

For more information about the Breeders’ Cup including possible contenders and ticket information, visit: www.breederscup.com.

STEWART ‘PUMPED AS EVER’ FOLLOWING SEEKING THE SOUL’S ACK ACK VICTORY – The smile on trainer Dallas Stewart’s face was hard to miss Sunday morning at Churchill Downs following Seeking the Soul’s gutsy 1 ¼-length victory in the $100,000 Ack Ack Presented by GE Appliances (Grade III) Saturday night. Now, the six-time winner is likely headed to the Breeders’ Cup, according to Stewart.

“That was a legit race with a legit final time,” Stewart said. “He ran the mile in (1:35.01) and showed a great effort at a track we know he loves. I’m pumped as ever with this horse. We have our options open a bit between the Dirt Mile (GI) and the Classic (GI). Mr. Fipke and I will get together to talk things over about where to head. He’s doing great this morning after the race.”

Prior to the Ack Ack, Seeking the Soul finished 13th in the $750,000 Woodward (GI) over 1 1/8 miles at Saratoga on Sept. 1. After running third in last year’s Lukas Classic, Seeking the Soul won a 1 1/16-mile condition allowance at Keeneland and then scored in the $500,000 Clark Handicap (GI) at Churchill Downs in late November.

Ridden by Brian Hernandez Jr., Seeking the Soul rallied from a couple lengths off the early pace before drawing clear inside the eighth pole.

“I think the slower pace helped me,” Hernandez said following the race. “I was able to keep up close to the pace and the leaders didn’t get away from me.”

Seeking the Soul is scheduled to remain in Barn 37 at Churchill Downs through the Breeders’ Cup.

The leading trainer and owner titles, however, will be decided with Sunday’s 10-race program.

Trainer Tom Amoss had a 7-5 win lead over Steve Asmussen, Brad Cox and Ian Wilkes to begin Sunday’s card. Wilkes has been mathematically eliminated with only one starter in Race 8.

Calumet Farm was the only owner with an entry Sunday: High Sheriff (Race 8, 15-1).

Jackie Rojas and Gary Tussey began Sunday with one victory but are not mathematically eliminated from the title.

Naveed Chowhan and Phillip Jones did not have any victories at the September Meet but had two entries a piece Sunday.

$19,973 CARRYOVER FOR SINGLE 6 JACKPOT; MANDATORY PAYOUT CLOSING DAY – Racing at Churchill Downs resumes Sunday for closing day of the 11-day September Meet. The first of 10 races is 12:45 p.m. Eastern and there’s a $19,973 carryover in the Single 6 Jackpot, which has a mandatory payout because of the meet’s conclusion. The six-race sequence will cover Races 5-10 starting at 2:45 p.m.

DOWN THE STRETCH – Prior to Sunday’s closing day, there have been 56 claims for a total of $1.17 million. … Racing will return to Churchill Downs on Sunday, Oct. 28 for the 21-day Fall Meet headlined by the Breeders’ Cup World Championships on Nov. 2 and 3. 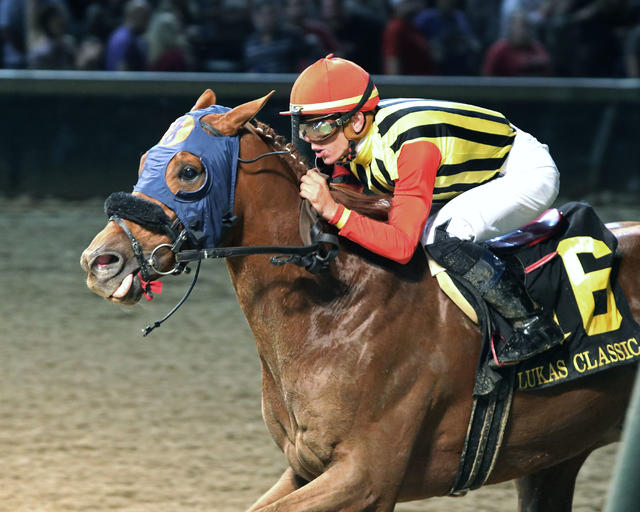