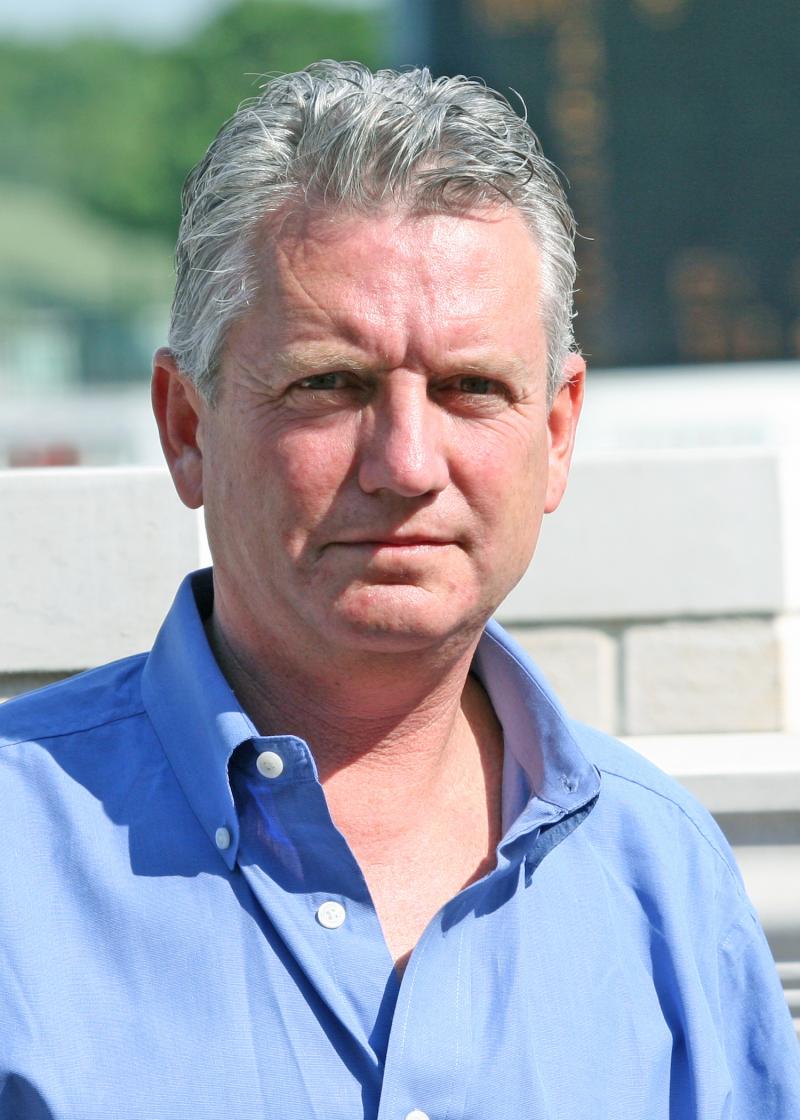 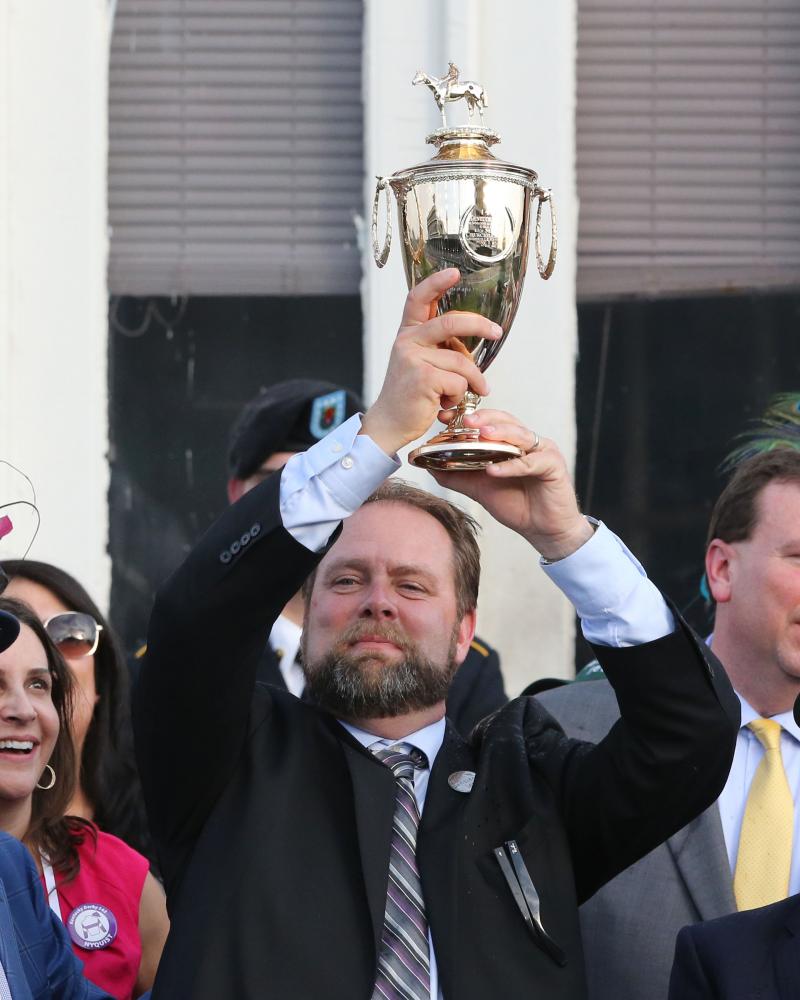 Friday morning was a busy one for the Mark Casse barn as a quintet of the trainer’s Breeders’ Cup aspirants made their final serious preparations for the Breeders’ Cup World Championships at Santa Anita on Nov. 4-5.

Champion Turf Mare Tepin worked a half-mile in :49 under regular rider Julien Leparoux in preparation for a defense of her title in the $2 million Breeders’ Cup Mile (Grade I). Churchill Downs clockers caught the daughter of Bernstein in fractions of :12.20 and :24.60 before galloping out in 1:02 and 1:16.60.

Casse’s 2-year-old colts Classic Empire and Keep Quiet (Fr), who are pointing for respective starts in the $2 million Breeders’ Cup Juvenile (GI) and the $1 million Breeders’ Cup Juvenile Turf (GI), worked a half-mile together in :50. They recorded splits of :12.80 and :25 and galloped out in 1:03 and 1:16.40. The former worked under Leparoux, while the latter worked under Geroux.

Following the renovation break, Casse sent out Live Oak Plantation’s Victory to Victory, who won the Natalma (GI) at Woodbine in her last start and is targeting the Breeders’ Cup Juvenile Fillies Turf. The daughter of Exchange Rate breezed a half-mile in :48.40 and recorded fractions of :24 and :36 and galloped out in 1:01.20 under Leparoux.

"It was a very exciting day. It’s an awesome experience to have these types of horses and then prepare so many horses for the Breeders’ Cup so it was a pretty important day,” said Norman Casse, son assistant to father Mark. “Tepin did her typical thing. She’s become much more manageable as she’s gotten older. We were just out there looking for a maintenance-type work. It was a pretty good work for her.”

Tepin put together a stellar 5-year-old campaign with six consecutive victories this year punching a pair of victories at Tampa Bay Downs this winter in the Feb. 12 Endeavour (GIII) and the March 13 Hillsborough (GII). These wins were followed by decisive wins in the April 16 Jenny Wiley (GI) at Keeneland and May 7 Churchill Downs Distaff Turf Mile (GII). She then took her talents overseas to Royal Ascot where she defeated some of the world’s top milers in the Queen Anne (Group 1) before her most recent win in the Woodbine Mile (GI) on Sept. 17. The Eclipse Award-winning mare’s win streak was snapped last time out when she finished second in the Shadwell Turf Mile (GI) at Keeneland on Oct. 8 behind front-running Photo Call.

It is undecided whether or not she stays in training following the Breeders’ Cup.

“Nobody has actually discussed that,” Casse said. “I don’t think there’s any time table or any plans for Tepin right now after the Breeders’ Cup. We’re just going race by race and we’re focused on trying to repeat as Breeders’ Cup champion.”

“La Coronel actually reminds me of her and the way that she used to be,” Casse said. “She’s kind of headstrong and always on the bridle. I really hold her in high regard. If you look at her she’s similar in a lot of ways. We started off on the dirt because she was showing so much talent on the dirt that we thought she was a good dirt horse and she actually kind of disappointed us a little bit and then we put her on the grass and it made her really excel. It just seems like she’s really talented and the best thing about her is that she’ll have a perfect trip. That makes a big difference in some of those races.”

Casse’s pair of 2-year-old colts will be entering the Breeders’ Cup with graded stakes victories at Keeneland under their belt. Classic Empire was an impressive three-length winner of the Dixiana Breeders’ Futurity (GI) on Oct. 8 and Keep Quiet (FR) triumphed in the Bourbon (GIII) on Oct. 9. The assistant trainer spoke highly of both horses, especially Classic Empire, who he described as “one of the most intelligent horses I’ve been around.”

“We brought out Classic Empire and Keep Quiet together,” Casse said. “They went off a little slower than we would have liked, but they finished strong and galloped out great with their last eighth of a mile in 1:13 and change for three-quarters so I thought they worked really well. Victory to Victory worked after the break and I think she’s kind of coming in under the radar a little bit. She’s a very, very talented horse.

“I think with the 2-year-olds, it’s more talent than maturity. The boys are very intelligent. Classic Empire is very, very mature but the two fillies are kind of flighty. They’re a little more difficult to manage than the colts so it’s not necessarily about the maturity its more about where they are talent-wise and where they are physically. With that being said, they’ve all run at racetracks like Saratoga or Keeneland that simulate the Breeders’ Cup atmosphere and they’ll be able to handle themselves.”

The 2-year-olds in the Casse barn are always highly regarded year-by-year, but Casse has placed an even higher level of confidence in this class of juveniles.

“I feel like this is a little bit different,” Casse said. “We always have some good 2-year-olds and there are some expectations going into next year. This time the expectations are a little higher. Classic Empire has shown that he may be at the top of his class. But we also have horses like Keep Quiet, Speedmeister and Thirstforlife that if they keep improving can be something special, too. We’ll have to keep our fingers crossed and move forward.”

SILENT DECREE STEPS UP IN SUNDAY’S STREET SENSE STAKES – Trainer Pat Byrne has always had confidence in his promising 2-year-old Silent Decree and hopes that the son of Bodemeister can step up when he faces winners for the first time in Sunday’s $80,000-added Street Sense, a one-mile event on the main track for 2-year-olds.

“I’m backing up a mile from two turns but I like horses dropping back off of distance,” Byrne said. “I love horses on the turn back just like I love horses going from turf to dirt. The fitness level is there. Silent Decree has a lot of speed, he’s not slouched. I just like him kind of sitting in the pocket and letting something go out there and then just running them down late. That’s how I visualize it. We’re going to catch a speedier group but I think that his last two races here he’s kind of loafed around, got to the front and kind of goofed off a little bit so I’m thinking that a steeper competition will give him something to run at. It’s probably a better test for him.”

Owned by Chuck and Maribeth Sandford, Silent Decree began his racing career on the Polytrack at Arlington Park with a third and second-place effort at 5 ½ furlongs, but found success when shipping to Churchill Downs where he broke his maiden last time out on Oct. 1. Byrne admitted that the horse was a bit green in this race.

“I don’t know what that was about. He’s never showed that in the morning,” Byrne said. “I think it’s just that he does stuff so easily that he gets to the front and starts looking around for competition. The steeper it gets, the better off we’ll be. He’s done nothing different; we got two works in him since that race. They were just maintenance halves, nothing fancy.”

The $200,000 Kentucky Jockey Club (Grade II) on Nov. 26 has been on Byrne’s mind for Silent Decree even before the horse broke his maiden and that’s where he’ll likely be headed if he puts in a good effort on Sunday afternoon.

“He’s still a (Kentucky) Jockey Club horse and he’ll run forever,” Byrne said. “My other horse (Just Move On) is going to run on Nov. 10 here. He should have won at Keeneland last time out but got in a lot of trouble. They’re both on track for the Jockey Club so we’ll see. I just hope that they keep improving and try to get a little luck here.”

Jockey Jose Valdivia, Jr. has the mount for Sunday’s race.

O’NEILL SHIPS FIRST-TIME STARTER MENACE THE DENNIS FOR STAKES – California invader Menace the Dennis enters Sunday’s inaugural running of the $300,000 Spendthrift Stallion Stakes without a single start under his belt, but two-time Kentucky Derby-winning trainer Doug O’Neill believes his 2-year-old colt will run a big race if he’s anything like his relatives.

“His half-sibling (Denman’s Call) won first time out and his mother (Maggie McGowan) won her first start as well, so obviously there is a lot of first-time-out wins in that family and we’re just hoping to continue that trend,” O’Neill said by phone from his Southern California base.

Menace the Dennis is one of nine offspring of Spendthrift’s leading stallion Into Mischief entered in the Spendthrift Stallion Stakes, which drew a full field of 14 juveniles. O’Neill has been eyeing this race since its formation in September.

“We’re so excited and what a cool concept this race is,” O’Neill said. “We’re very grateful that Mr. (B. Wayne) Hughes and Churchill Downs put this together. We knew that we got this son of Into Mischief so we had this race circled a few months ago for the horse. He’s been doing really well and training great. He had a couple of race-like works in him out here. The sky is the limit for this horse. We’re hoping to see a good effort out of him.”

COX EXCITED ABOUT RAGS TO RICHES ENTRANT HOLIDAY’S ANGEL – Elm Racing LLC’s Holiday’s Angel enters Sunday’s $80,000-added Rags to Riches off of a solid maiden effort at Churchill Downs on Sept. 30, which she won in wire-to-wire fashion by 5 ¼ lengths.

"She didn’t get a big figure out the race, but we really liked her,” said trainer Brad Cox. “She had kind of a weird trip down on the inside, sitting off a horse down on the inside and showed a lot of courage and grit to fight off those fillies that day. I think the track was playing a shade biased. It looked like the inside part of the track was really good that day. We’re really excited about her; it was either this or wait another nine days for a first-level allowance going 1 1/16 miles. I think that a mile is good for her since she’s proven at the distance.”

The daughter of Harlan’s Holiday’s maiden win was only her second start, the first of which she encountered some traffic trouble throughout the race.

"She broke from the outside that day,” Cox said. “The plan was to teach her something and (jockey) Robby (Albarado) did a good job of schooling her and sitting in behind horses. He dropped her down on the inside, brought her back out, split horses and got bumped and still ran on and ran a big race. Once again it wasn’t one that showed much of a figure but it showed that she wants to be a racehorse so it was a positive move.” 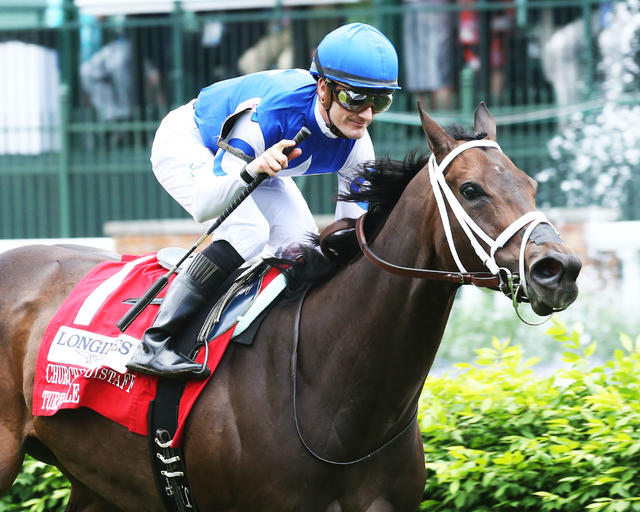