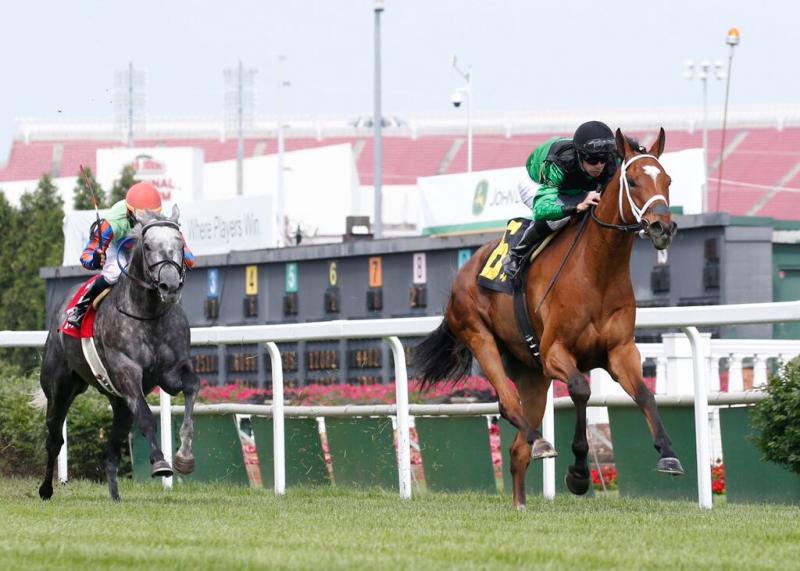 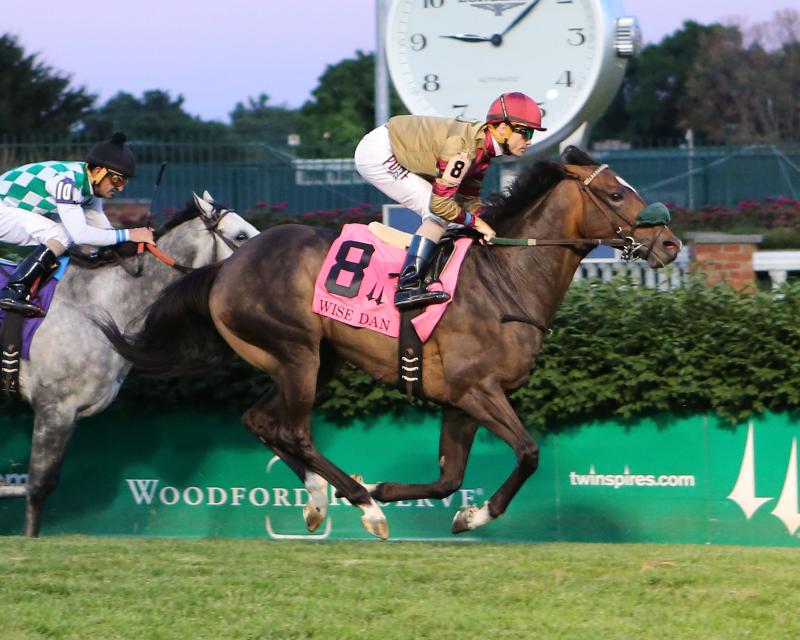 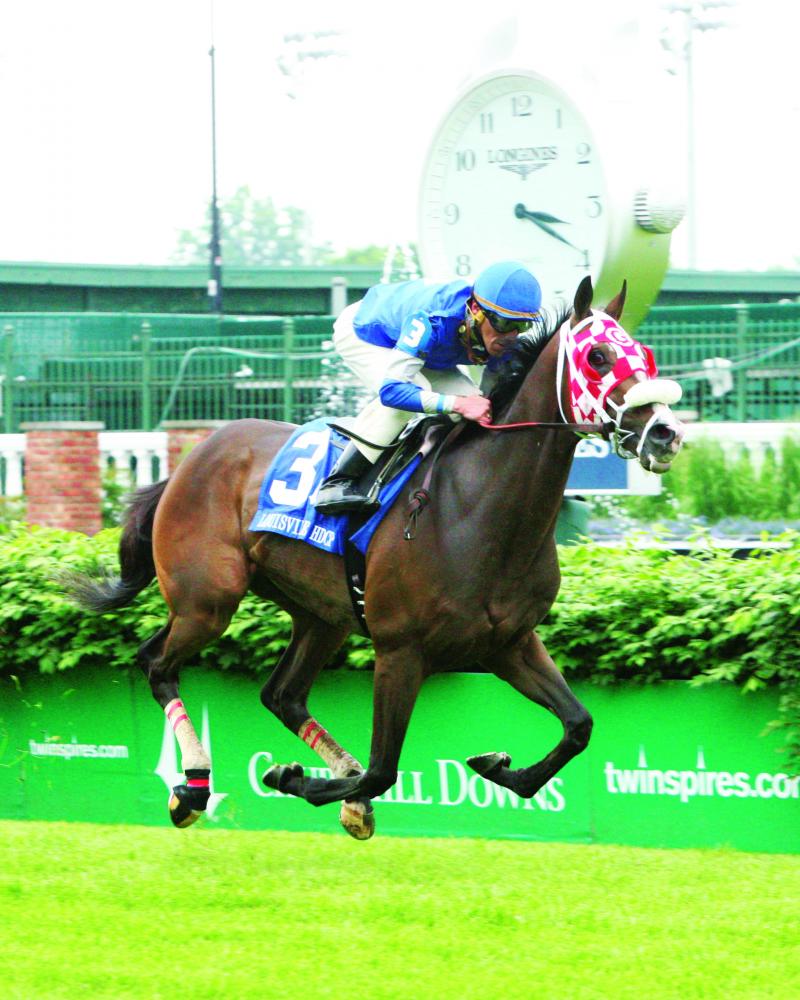 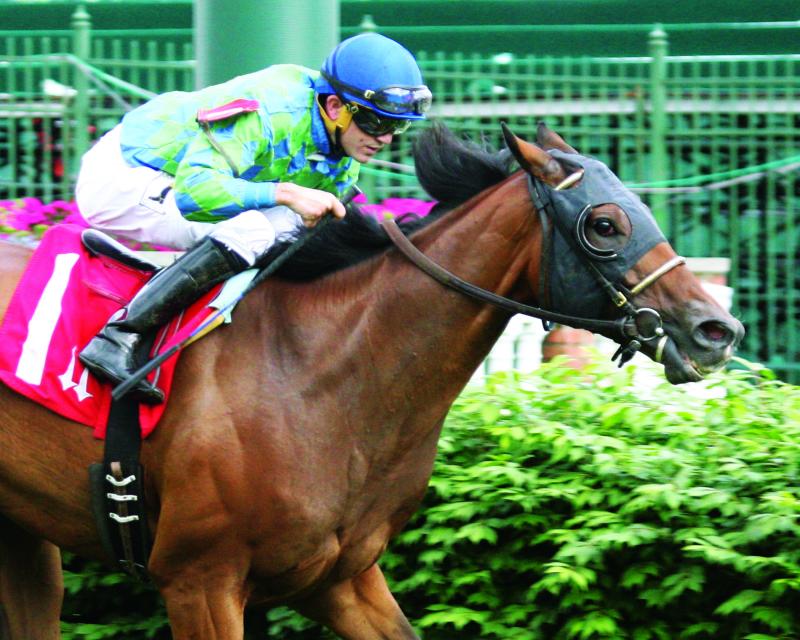 The Roger Attfield-trained Are You Kidding Me, winner of the recent Autumn Stakes at Woodbine, travels south to Churchill Downs for the River City Handicap (GIII) on Thanksgiving Day. (WEG/Michael Burns)

Multi-millionaire and two-time Grade I-winner The Pizza Man will vie for his 13th career stakes win when he faces a full field of older males in the 39th running of the $100,000 River City Handicap (GIII) at 1 1/8 miles on turf on Thanksgiving Day at Churchill Downs.

The River City Handicap joins the $200,000 Falls City Handicap (GII), a 1 1/8-mile test for fillies and mares, on Thursday’s special 12-race holiday program. Racing on Thanksgiving Day at Churchill Downs has been a Louisville tradition since 1969 where more than 7,000 turkey dinners are served with all the trimmings, making it the largest number anywhere in the region. The first race begins early at 11:30 a.m. (all times Eastern) with the Falls City set as Race 10 at 3:53 p.m. and the River City as Race 11 at 4:22 p.m. The final race of the day is scheduled for 4:50 p.m. ET.

The Pizza Man, based in Chicago with trainer Roger Brueggemann, is the 124-pound River City high weight, and will concede two to 10 pounds to his 13 rivals. Sixteen horses were entered Sunday for the popular grass event but only a maximum of 14 will start.

The Pizza Man, the Eclipse Award finalist for 2015 Champion Male Turf Horse owned and bred by Midwest Thoroughbreds Inc. of Richard and Karen Papiese, is the most accomplished horse in the race with 17 wins and earnings of $2,117,371 from 32 starts, which includes a dozen stakes triumphs. The popular Illinois-bred made international headlines a year ago when he beat Big Blue Kitten by a neck in the $1 million Arlington Million (GI) for his third stakes win in a row.

After a 4-1-0 record in six 2015 starts, The Pizza Man has won just once in six starts this year but it came against Grade I competition in the $228,401 Northern Dancer Turf (GI) at Woodbine in September. A month later, he would finish fourth behind Erupt (IRE) in the $762,726 Canadian International (GI). Both of those races were at 1 ½ miles on grass and The Pizza Man will be cutting back to a distance that he has raced only twice before. He did win the $75,000 Robert F. Carey Memorial Handicap at 1 1/8 miles on turf at Hawthorne in 2013.

Chief among The Pizza Man’s rivals is Canadian-based Are You Kidding Me from the barn of veteran trainer Roger Attfield. The versatile 6-year-old son of Run Away and Hide has won two stakes in a row on Woodbine’s synthetic Tapeta surface – the $123,006 Durham Cup (GIII) in September and the $159,068 Autumn (GII) on Nov. 6 – and hopes to become a millionaire for owners Ronald Kirk, John Bates and Michael Riordan with a solid run in the River City. Overall, Are You Kidding Me, a five-time Grade II winner and twice a Grade III winner, boasts a record 9-5-6 in 31 starts with $981,852 in career earnings.

The Ian Wilkes-trained Thatcher Street, a 5-year-old gelding owned by Randall Bloch, Phil Milner, John Seiler and Amtietan LLC, beat Pleuvan (FR) by a half-length to take the $62,640 Opening Verse Overnight Stakes in May. A year ago, he finished second and was beaten two lengths by Heart to Heart in the 38th River City.

Mike Maker, the leading trainer at Churchill Downs’ Fall Meet, will saddle a trio of horses for the River City: Ken and Sarah Ramsey’s Granny’s Kitten, Three Diamonds Farm’s Roman Approval and Michael Hui’s Taghleeb. Maker is enjoying the finest year of his 16-year training career with purse earnings of $10.7 million (which ranks sixth nationally), 190 wins and 31 stakes victories. More than half of his success has come in grass races, in which he’s amassed nearly $7 million from his 104 wins in 529 starts on turf in 2016. Twenty-five of his 31 stakes victories have come on the grass, including eight graded stakes triumphs led by Al’s Gal’s score in the Grade I E.P. Taylor at Woodbine.