LOUISVILLE, KY (Thursday, April 18, 2019) – Thurby presented by Old Forester® goes Gonzo this year with a celebration of the late famed journalist and Louisville native Hunter S. Thompson and groundbreakingillustrator and Thurby special guest Ralph Steadman. Now in its sixth year, Thurby marks the official start of Derby weekend and continues the tradition of featuring the best of Kentucky with Bourbon, live local music, thrilling horseracing. Gates open for 11 races on Thursday, May 2 at 11:00 a.m. with the first post at 12:45 p.m. EDT. Thurby will be broadcast live on NBC Sports Network from 4:00 p.m. – 6:30 p.m. Tickets start at $22 and are available at www.kentuckyderbyweek.com.

As the exciting highlight of this year’s event, special guest Ralph Steadman partnered with Churchill Downs and the Speed Art Museum to create an original painting to celebrate Thurby Goes Gonzo 2019. The artwork will be featured on a limited edition poster, available for purchase for $25 at the event. Steadman, who attended his first Kentucky Derby in 1970 with his Gonzo partner in crime Hunter S. Thompson, will sign posters in the Plaza from 2:00 p.m. – 3:00 p.m. The original artwork will be on display at the Kentucky Derby Museum on Thurby through the end of Spring Meet.

Recommended attire is whatever reflects your Kentucky spirit – from casual to Derby-inspired.

Ralph Steadman is a prolific artist who in his 60 year career has produced thousands of groundbreaking and influential artworks. His big break really came in 1970. Having published his first collected book of cartoons, Still Life with Raspberry, he set off to America to cover the Kentucky Derby for Scanlan’s Monthly, where everything would change on his meeting Hunter S. Thompson. Described as, “a Hell’s Angel who had shaved his head,” Steadman set off to meet this maverick journalist at the Kentucky Derby. Legend has it that it took them three days to find each other. Ralph often recalls that Hunter commented when they finally met, “Well they said you were weird, but I did not think you would be that weird!” Warned not to do any of his, “Filthy scribbling,” Ralph almost caused a fight at the Pendennis Club in Louisville before being maced by Hunter to help him escape. Together Ralph and Hunter would develop ‘Gonzo’ journalism, where you do not simply cover the story but become the story. So began a lifelong collaboration, including the iconic Fear and Loathing in Las Vegas, which was originally serialized in Rolling Stone Magazine. Another lifelong association was begun, and Steadman is still listed as Gardening Correspondent for the legendary publication. 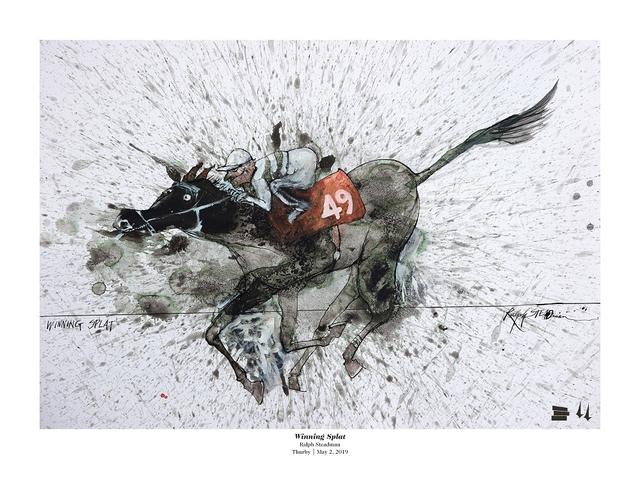