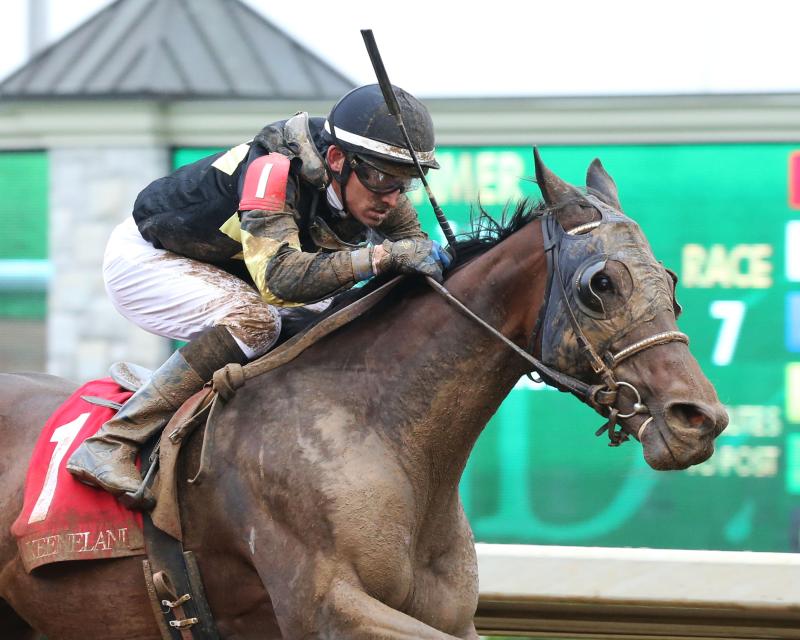 The Ian Wilkes-trained Sweetgrass scored her only win of 2017 in an April allowance race at Keeneland. (Coady Photography, Keeneland)

Trained by Brad Cox, Tiger Moth picked up her first stakes win on July 15 in the Mari Hulman George Memorial at Indiana Grand when she defeated a field of eight rivals by 2 ½ lengths. The 5-year-old mare by Street Sense was victorious nearly a month later in Ellis Park’s Groupie Doll (GIII), narrowly defeating the Ian Wilkes-trained Walkabout.

“She’s really been progressing well,” Cox said. “I think we’ve figured things out with her and she should be sitting on another solid effort for Saturday’s race. She does her best running from off the pace so hopefully we’ll get some help up front.”

Six other fillies and mares are set to take on Tiger Moth including Merriebelle Stable LLC’s Blue Prize (Arg). Already a Group I winner in Argentina, Blue Prize was the bridesmaid in her first three starts in the U.S. for trainer Ignacio “Nacho” Correas IV. Most recently, the 4-year-old daughter of Pure Prize was the runner-up in Saratoga’s $100,000 Summer Colony Stakes. James Graham will have the riding assignment.

Wilkes is set for his rematch versus Tiger Moth with two entrants: Fuhriously Kissed and Sweetgrass. Anita Cauley’s Fuhriously Kissed was an impressive four-length winner in an allowance event on July 24 at Saratoga. The 4-year-old daughter of Langfuhr tested her hand in the Summer Colony at Saratoga but finished third, beaten 6 ¾ lengths. Wilkes’ other entrant, Sweetgrass, is seeking her first stakes victory as she stretches around two turns for the first time in more than nine months. Julien Leparoux has the call on Fuhriously Kissed while Wilkes’ son-in-law Chris Landeros will get the leg-up on Sweetgrass.

Mo D’Amour (15-3-1-4 –$304,460) is no stranger to big races at Churchill Downs, finishing fifth in the 2016 Kentucky Oaks. The 4-year-old filly by Uncle Mo was transferred in July from trainer Todd Pletcher to Rodolphe Brisset.