Canadian-invader Tiz a Slam led every step of the way in Saturday’s 82nd running of the $100,000 Louisville Stakes (Grade III) at Churchill Downs and turned back fierce challenges in deep stretch from Shahroze (IRE), Nessy and Vettori Kin (BRZ) to win the 1 ½-mile turf marathon by three-quarters of a length.

Hall of Famer Roger Attfield trained the winner for Robert and Mark Krembil’s Chiefwood Stables. Attfield also won the 2012 Louisville (then known as the Louisville Handicap) with Simmard, who holds the stakes record of 2:27.16.

Tiz a Slam was fourth in his last start, the April 20 Elkhorn (GII) at Keeneland.

Tiz a Slam returned $7, $3.60 and $3.20 as the 5-2 second betting choice. Shahroze (IRE), under Chris Landeros, paid $3.60 and $2.80 as the 2-1 favorite. Nessy, ridden by Julien Leparoux, was another head back in third and paid $3.40. Defending Louisville champ Vettori Kin (BRZ) was another neck back in fourth and was followed by Royal Artillery, Soglio and Strike the Flag.

Tiz a Slam, a 5-year-old son of Tiznow out of the Grand Slam mare Flaming Rose, was bred in Ontario, Canada by his owners.

Racing at Churchill Downs continues Sunday with a 10-race card that begins at 12:45 p.m. (all times Eastern). Sunday doubles as Family Adventure Day presented by Kroger with more than 20 fun activities for kids 12 and under in the Plaza. The theme is “Play Sports!” and Louisville City FC stars will be in the Plaza to meet young fans. The day will also feature cheer and dance performances, yoga demonstrations and tennis lessons by the U.S. Tennis Association. Stick horse races, a petting zoo, mini pony rides, face painting, bounce houses, corn hole, and special area for children under 3 also will be featured.

Steve Bahen, jockey of TIZ A SLAM (winner): “It’s been a great trip to Churchill Downs. We had everything go our way today and he ran a really strong race. We had a comfortable lead and he kept going the entire time.”

Sue Lorimer, assistant trainer of TIZ A SLAM (winner): “Roger (Attfield) looked at this race and thought it would be the perfect fit for him going 1 ½ miles. It was the absolute perfect trip and Steve was able to get a very comfortable lead. We’re thrilled and so proud of Tiz a Slam. He’s just so classy and proved it once again today.”

Chris Landeros, jockey of SHAROZE (IRE) (runner-up): “We were just second best today. He tried really hard to run down (Tiz a Slam) but we couldn’t close enough ground late. I’m very proud of his effort.” 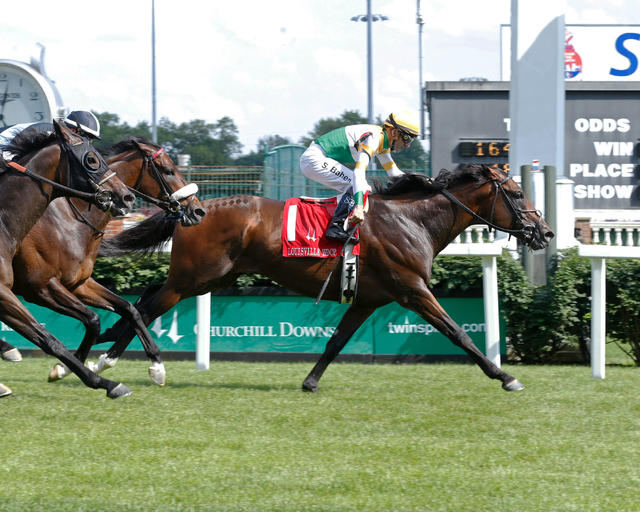