LOUISVILLE, Ky. (Friday, May 4, 2018) – Ken Baca, Lisa and Nicholas Hawkins and Lynne and Joseph Hudson’s Toinette caught the previously undefeated Rushing Fall just before the wire to win the 34th running of the $200,000 Edgewood presented by Forcht Bank (Grade III) for 3-year-old fillies by a neck.

Trained by Neil Drysdale and ridden by Flavien Prat, Toinette covered the 1 1/16 miles on the firm Matt Winn Turf Course in 1:41.60 in her stakes debut.

Longshot Figarella’s Queen took the early lead but as the field reached the backstretch, Rushing Fall dragged Javier Castellano to the lead with Daddy Is a Legend and Irad Ortiz Jr. following right behind through a half-mile in :48.21

Those two sped off as team hitting six furlongs in 1:11.37 and maintaining a daylight advantage on the field until deep stretch when Toinette went rushing by.

Toinette is a Kentucky-bred daughter of Scat Daddy out of the Sunriver mare I Bet Toni Knows. The victory was worth $117,800 and increased Toinette’s earnings to $198,120 with a record of 4-3-0-0 stakes debut.

It was another half-length back to Got Stormy in fourth with Altea (FR), Beyond Blame, Bo Peep, Kabella, Figarella’s Queen and Beach Waltz.

Flavien Prat (rider of Toinette, winner) – “She broke slow. I was expecting to be a lot closer than that. Around the turn when everybody made their move I was able to go around people and then just put her straight. She gave me a good run down the lane and I guess she likes the distance, too.”

Neil Drysdale (trainer of Toinette, winner) – “She missed the break and Prat didn’t panic. He’s a very good rider. He’s a developing rider and he’s getting better and better and better. She got a little stuck in the rail and he was able to get her out. She has a great turn of foot and when you ask her, she goes. She’s growing so we’ll back off on her now. The race at Keeneland was a very strong race. What do they call it? A hot race? That’s why we felt we could make the jump to this. Now we’ll give her a breather.”

Javier Castellano (rider of Rushing Fall, runner-up) – “She was fresh today and kind of ran off. The pace was fast. I never got to cover her up like I wanted. She was a little aggressive and it cost me the race.”

Irad Ortiz Jr. (rider of Daddy Is a Legend, third-place finisher) – “My filly broke good. She was a little keen down the backside. I had to put her in the clear before I wanted to. I tried to get her to relax, but she was too keen. She ran a good race. She just got beat by two good fillies.” 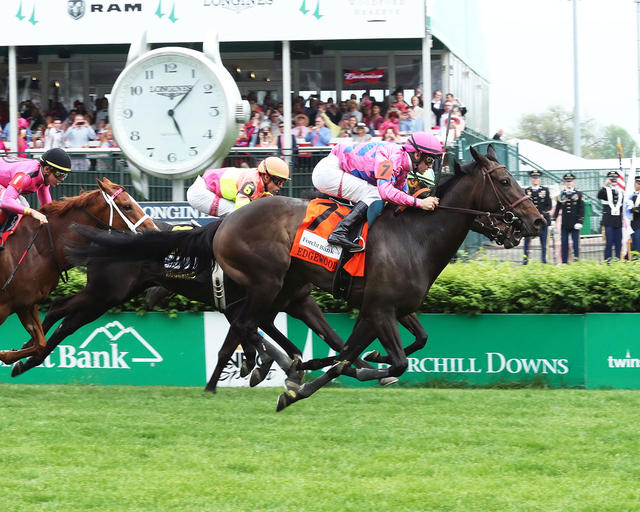