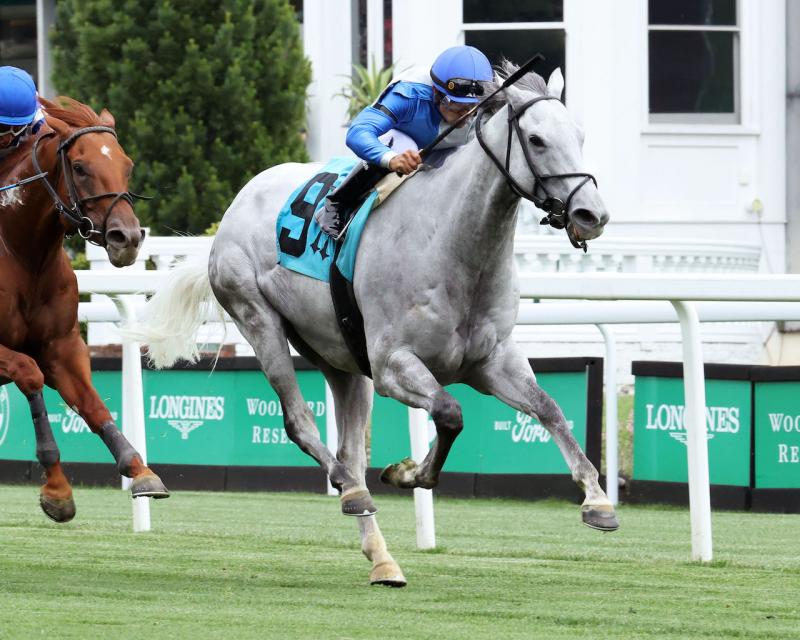 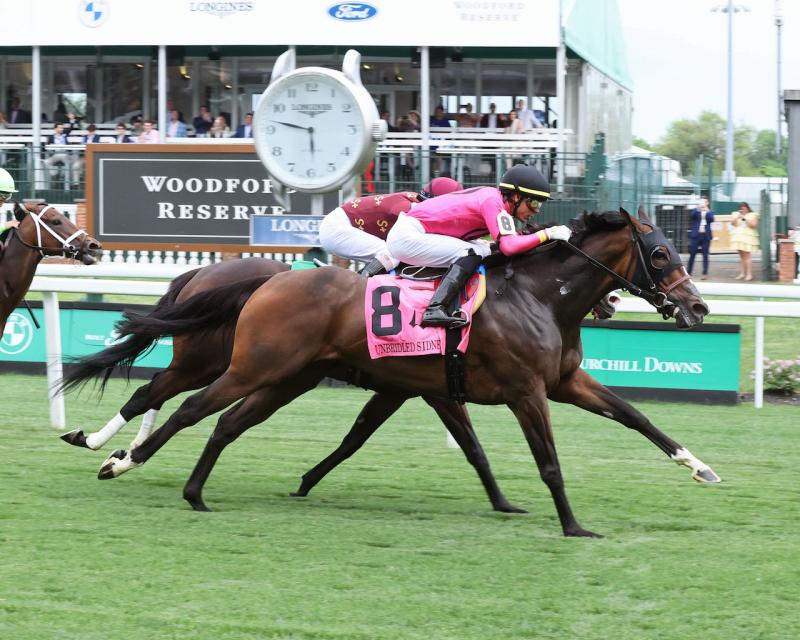 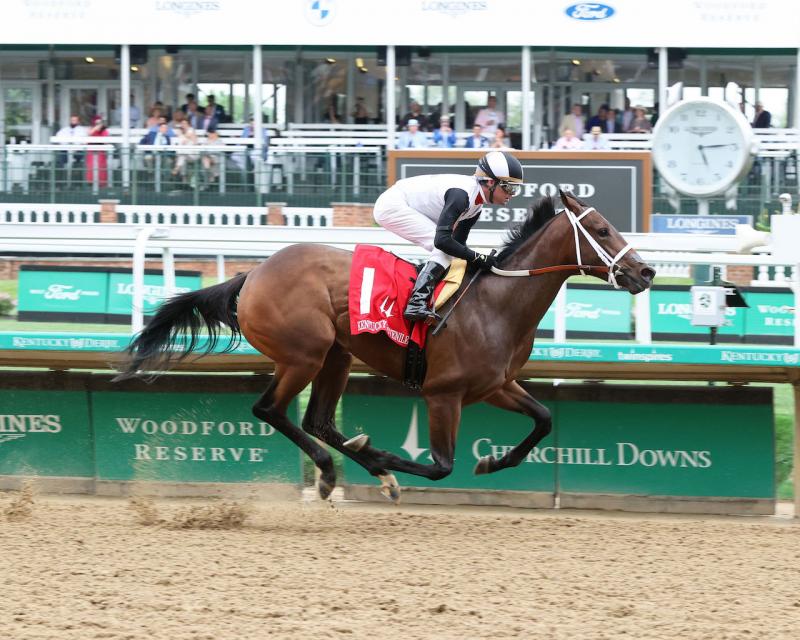 Griffin Stables, Saul Carrilo, Victor Flores and Eugene Zondlo’s Tom’s Regret used the inside post to his advantage by taking the lead out of the gate and going on to win the 28th running of the $200,000 Kentucky Juvenile for 2-year-olds by a length over The Big Wam on Thursday afternoon before a crowd of 47,872.

Following the Kentucky Juvenile, Terry Hamilton, trainer Brian Lynch and Gary Barber’s Toby’s Heart set a stakes record in winning the 12th running of the $200,000 Unbridled Sidney (Listed) for fillies and mares by a neck over Change of Control.

Also Thursday afternoon. Steve Goldfine, Kari Provost and Jeff Zlonis’ Gray’s Fable led all the way to win the 17th running of the $160,000 Opening Verse Overnight Stakes for 4-year-olds and up.

In the Kentucky Juvenile, Tom’s Regret led the field of 12 down the backstretch through an opening quarter-mile in :22.63 while being tracked by the trio of Lone Leader, Mr. Gordy and Hill of Tara.

Tom’s Regret shook off those challengers at the top of the stretch and then held off a late bid from The Big Wam who had moved into contention with a three-wide move.

Ridden by Tyler Baze and trained by Jorge Periban, Tom’s Regret completed the five furlongs on a fast track in :58.23. A winner on debut by 11 ½ lengths at Santa Anita on April 15, Tom’s Regret is a California-bred daughter of Tom’s Tribute out of the Quality Road mare Pure.

In the Unbridled Sidney, Tobys Heart raced near the back of the eight-horse field as Ambassador Luna went to the front while being closely pursued by a quintet of challengers.

On the far turn, Tobys Heart was in behind horses and waiting for room that opened at the head of the stretch when Tobys Heart made a six-wide move for clear sailing.

Change of Control, runner-up in last year’s race, surged to the front at midstretch but was overtaken in the final yards.

Trained by Brian Lynch and ridden by Jose Ortiz, Tobys Heart completed the 5 ½ furlongs on a firm renovated Matt Winn Turf Course in 1:04.11 to break the stakes record of 1:04.57 established by A Little Bit Me in 2019.

In Good Spirits finished fourth and was followed in order by Catch a Bid, favored Brooke Marie, Bullseye Beauty and Ambassador Luna.

In the Opening Verse, Gray’s Fable took the lead out of the gate, opened a daylight advantage in the upper stretch and held off a late bid from Hidden Stash by a head.

Trained by Roger Attfield and ridden by Luis Saez, Gray’s Fable completed the 5 ½ furlongs on a firm renovated Matt Winn Turf Course in 1:36.22.

Gray’s Fable led the field of seven through fractions of :23.82 and :47.93 while being stalked by Max K.O. Coming off the far turn, Gray’s Fable cut the corner and increased his lead and opened enough of a cushion to withstand the late charge from Hidden Stash.

Tyler Baze (Jockey, Tom’s Regret, winner) – “Her ears were up and flicking back and forth all the way down the lane. She never came close to laying her body down. She’s got so much talent it’s unbelievable. She gave those boys a whipping today.”

Jorge Periban (Trainer, Tom’s Regret, winner) – “It is a pleasure to be in Kentucky again. We were here and won three years ago (with Phantom Boss in the Bashford Manor) and it is a very special experience. We are proud of our filly.”

Jose Ortiz (Jockey, Tobys Heart, winner) – “Perfect trip, lovely. She was in the perfect spot the whole race. The pace developed nicely in front of me and I was able to get a good spot behind Colby (Hernandez on Change of Control) and he took me right to the wire. I’m just glad she had that extra kick at the end.”

Brian Lynch (Trainer, Tobys Heart, winner) – “She’s always been a very good filly. This is probably the distance that she likes to run, and she got a nice pace to run at. Jose gave her a very good ride. The heavens opened up when she needed to get through, and she got through. It was just a great ride, I’m so thrilled about it. This year, ultimately we’re gonna campaign her toward Kentucky Downs, where she won a $500,000 race last year. Hopefully that’s where we’re headed to.”

Colby Hernandez (Jockey, Change of Control, second) – “She tried and ran a real good race. We got a better trip today. The last time she kinda got bumped around. The trip before that she turned her head at the break. Today she got away good and ran her race.”


Michelle Lovell (Trainer, Change of Control, second) – “Colby had her placed really well. It was all about the break the last two times. She gives everything every time. She is as honest as any horse I have ever had. I love her so much. She is so confident, and she went into the race doing really good, and Colby gave her an awesome ride. She ran her eyeballs out, she really did.”

Luis Saez (Jockey, Gray’s Fable, winner) – “It was a magnificent race with a pretty good finish. I saw the horse come flying behind me (runner-up Hidden Stash and Rafael Bejarano), but he couldn’t catch me. The strategy was to get on the lead and use my horse’s speed to set the pace. I knew the outside horse (Max K.O.) had good speed away from the gate, but we had the inside post. That was the first time that I rode him, and I’m grateful to be able to win with him today.”

Kari Provost (Co-owner, Gray’s Fable, winner) – “I got choked up watching him come down the lane. It was a thrill. (Trainer) Roger (Attfield) wasn’t here obviously, but it’s a great win for him and his team.” 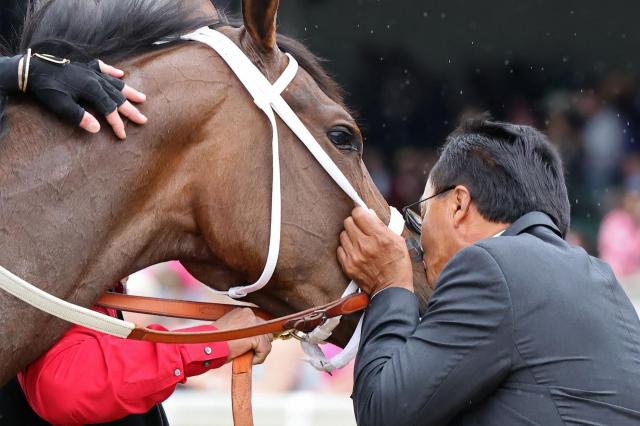