Cox’s $6 million Breeders’ Cup Classic (Grade I) contenders Essential Quality and Knicks Go both worked following the 7:30 a.m. (all times Eastern) track renovation break. Essential Quality, with jockey Florent Geroux in the saddle, breezed outside of stablemate Colonel Bowman. The multiple Grade I-winning 3-year-old started one length back of his workmate and finished five lengths in front through splits of :23.40 and :47. He galloped out six furlongs in 1:13. Shortly after his move, likely Classic favorite Knicks Go, with regular exercise rider Hugo Garcia up, clipped through fractions of :24.40, 36.40 and :48.60 with a six-furlong gallop out in 1:13.80 and seven furlongs in 1:27.60.

About 90 minutes later, Longines Kentucky Oaks (GI) winner Shedaresthedevil, preparing for the $2 million Longines Distaff (GI), worked with Geroux aboard through early fractions of :24 and :48.20.

“It was a great morning and all three horses put in great works,” Cox said. “It was exactly what we were looking for heading into the Breeders’ Cup next week. All three of these horses were scheduled to work (Saturday) but we got a lot of rain in the area so we moved them all to (Sunday). Overall, it worked out really well. I thought it was a good track. It was still a little wet but it was drying out as the morning was going on.”

Owned by Godolphin, Essential Quality has been off since winning the $1.25 million Travers (GI) two months ago at Saratoga.

“Essential (Quality) really loved the track this morning and it was probably the Tapit coming out of him a little bit,” Cox said. “There was a set of horses slowing down in front of them and I told Florent on the radio to gallop out by them. It was a really, really good move. A lot of people scratch their heads the way he trains in the morning compared to running in a race. That’s just who he is but I think he’s really developing at the right time.”

Korea Racing Authority’s Knicks Go, who is the likely favorite in the Classic, will attempt his second-straight Breeders’ Cup victory after winning last year’s Dirt Mile (GI). The speedy Maryland-bred has won his last three races, including a victory in the $400,000 Lukas Classic (GIII) at Churchill Downs.

“He’s just a really cool horse,” Cox said. “He’s very kind when he’s in his stall but he’s very aggressive, in a good way, outside of the barn. He knows his job and puts a lot into his training and works. I don’t see anything from his previous races than he can’t get the extra eighth-mile distance in the Classic. In the Whitney, against a field of really good horses, I thought he showed he could get an extra quarter-mile. He seems to clear off around the turn from his competition and able to go fast and kick on.”

“She always gets into a good rhythm in her training and races,” Cox said. “We saw that again today. Florent worked her and she was just cruising around there. She always seems to be under the radar, even going back to when she won the Kentucky Oaks (at odds of 15-1). I thought I ran her a little too quickly back in the Spinster (GI) last year. She’s gotten the job done in three out of four starts this year. She doesn’t run bigger figures than some of the older mares but she is a racehorse through and through. When she gets in a battle, she shows all heart and determination to get the job done.”

All of the local Breeders’ Cup hopefuls are scheduled to van to Indianapolis on Monday at noon (all times Eastern) for a 4 p.m. flight.

DOWN THE STRETCH – Racing will continue Wednesday at Churchill Downs with a first post of 1 p.m. … The podcast of Friday’s episode of “Inside Churchill Downs” is available here: https://bit.ly/3nLpQbM. There will be no show Friday due to the Breeders’ Cup World Championships. 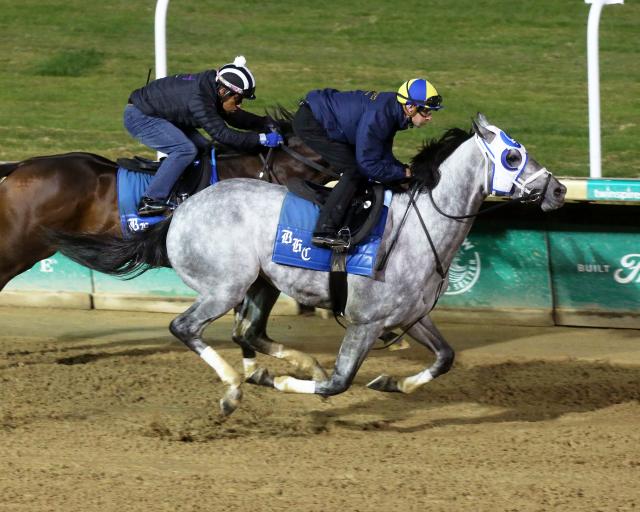