There were a total of 20 Breeders’ Cup contenders who breezed Sunday morning at Churchill Downs as the connections eagerly await the 35th renewal of the World Championships on Nov. 2-3 beneath the historic Twin Spires at Churchill Downs.

The following horses recorded published workouts Sunday morning. For more information on each, see the stories below:

“It was a good work,” trainer Jonathan Thomas said. “It always takes a lot of anxiety out of our lives when these horses have their final works. Really, what was most important to me this morning, was to see he continued doing things the way he has been throughout the year.”

The 3-year-old son of More Than Ready has been stabled at Churchill Downs for 10 days from his home base in New York.

“I just wanted to get him down her early to see how he handled the new surroundings,” Thomas said. “You can see one work from a horse to get a sense if they like the track but the second work can really tell you a lot of how they’re handling things.”

Kentucky Oaks (GI) winner Monomoy Girl came out with her stablemates Arklow (Longines Turf) and Will Call (Turf Sprint) at the special 7:30 a.m. time for Breeders’ Cup runners and worked a half mile in 48.40 in company with older male allowance level runner Dazzling Gem under regular rider Florent Geroux. Her splits were :12.20, :23.60 and :36.20 before galloping out in 1:01.40 and 1:15.80.

“Dazzling Gem was aggressive going to the pole,” Cox said. “The plan was for Monomoy Girl to sit right off him, but Dazzling Gem was aggressive. It still worked out well. Florent was able to range up to him and they went head and head. It was what we were looking for. We didn’t want to do as much as we had in the other works. I caught her in :49 2/5 and out in 1:01 4/5, so a solid breeze.”

“He broke off slow, but finished up well,” Cox said. “Shaun Bridgmohan is his regular rider and was aboard for the work. He was pleased with how he was moving.”

“Arklow is just going off a race last week, so we didn’t need him to do too much,” Cox said. “We just wanted to let him stretch his legs. We may not have the fastest horse in the race, but he may be the fittest. He deserves a shot.”

“She looked fantastic,” Cox said. “She broke off nice and easy. Galloped out well. I’m just super pleased with her. She did everything right.”

IMPERIAL HINT BREEZES HALF-MILE IN :48.80 WITH UNEXPECTED COMPANY – Raymond Mamone’s multiple Grade I-winning sprinter Imperial Hint received some rather unexpected company when he worked a half-mile in :48.80 Sunday at Churchill Downs in preparation for the TwinSpires Breeders’ Cup Sprint (GI).

“We weren’t really anticipating having company,” said trainer Luis Carvajal Jr., who also has been acting as Imperial Hint’s groom while he is at Churchill Downs. “I thought it was a very good work for us. I’m sure he could’ve easily gone a second or two faster.”

“It was a busy, but fun morning in the ‘Romans Clocker Stand’,” Romans said. “I thought both horses worked phenomenal. I really like our chances in both of these races. These horses are improving at the right time and training extremely well.”

Bob Baron’s Promises Fulfilled, with regular exercise rider Faustino Herrarte aboard, worked through splits of :12.20 and :23.60, before galloping out six furlongs in 1:14.20, according to Nichols.

Romans also reported that Dirt Mile contender Dak Attack, who breezed five furlongs in 1:00, is “on the fence” about running in the race.

“Both of these horses worked well today,” assistant trainer Kenny McCarthy said. “We thought about working Channel Maker on the turf again but he did fine last week on the dirt.”

CASTELLANO GETS TEST DRIVE ON CITY OF LIGHT FOR BREEDERS’ CUP DIRT MILE – Mr. and Mrs. William K. Warren Jr.’s two-time Grade I winner City of Light had a get-acquainted session with jockey Javier Castellano Sunday morning, working a half-mile in :47.60 after the second renovation break.

“This was my first time on him and I liked him,” said Castellano before flying back to New York with a return to Louisville slated for Thursday.

Trainer Michael McCarthy was happy with the breeze over a fast track.

“I was pleased with him and he ran through his gears,” McCarthy said.

Castellano’s work with McCarthy was not done for the morning as a half-hour later he partnered Ciaglia Racing and Eclipse Thoroughbred Partners’ Paved through a five-furlong turf work with Madaket Stables’ Liam the Charmer in 1:05.60 over a turf course rated as good.

“Those were maintenance works because she is going to go 1 3/8 miles (in the Maker’s Mark Breeders’ Cup Filly & Mare Turf-G1) and he is going a mile and a half,” McCarthy said. “I was very happy with both of them and they got over the grass fine.”

Mom’s On Strike started a couple of lengths behind Tracksmith with Adam Beschizza up and finished on even terms with splits of :24.20, :36.20 and out five furlongs in 1:01.80.

“I thought she worked super,” Sharp said. “She always does better with a target. She will go back to the track Tuesday and this week we will take advantage of the turf training. She is very familiar with the course having won over it.”

Winner of the Bewitch (GIII) this spring at Keeneland going 1 ½ miles, Mom’s On Strike may have an equipment change for the Filly & Mare Turf at 1 3/8 miles.

Sharp said that Tracksmith, who is far down on the preference list for the $1 million Breeders’ Cup Juvenile Turf (GI), has been nominated to the $100,000 Atlantic Beach to be run at six furlongs on the grass at Aqueduct Nov. 10.

ADDITIONAL BREEDERS’ CUP NEWS AND NOTES – Trainer Jeff Bonde’s two Breeders’ Cup hopefuls: Miss Sunset (Filly & Mare Sprint) and King of Speed (Juvenile Turf) put in half-mile works on the fast main track. Working solo under exercise rider Tony Gutierrez, Miss Sunset covered the distance in :49.80 with fractions of :12.60, :24.40 and out five furlongs in 1:04.40. Fourth as the favorite in the Thoroughbred Club of America (GII) at Keeneland in her most recent start, Miss Sunset is owned by Phil Lebherz and Alan Klein. King of Speed, owned by Del Secco DCS, Inc., covered the half-mile in :50 with splits of :12.60, :24.80 and out five-eighths in 1:04.80. King of Speed has won the Del Mar Juvenile Turf and Zuma Beach in has past two starts at the Juvenile Turf distance of one mile. Bonde is expected to arrive in Louisville from his Southern California base midweek. … The arrivals of the California-based Breeders’ Cup contenders are expected to arrive Sunday and Tuesday, according to Director of the Stable area Steve Hargrave. … Trainer Aidan O’Brien’s Breeders’ Cup contingent is on scheduled to arrive at Churchill Downs from Ireland on Monday afternoon, according to Hargrave.

Entries for all races on Friday and Saturday are due Monday at 10 a.m. Churchill Downs racing officials will publish an early overnight of undercard entries on Monday afternoon prior to the Breeders’ Cup Post-Position Draw.

Access will be granted to the event with a Breeders’ Cup media credential. Enter the facility through the Paddock Gate. Free parking is available in the Orange or Green lots.

WORKOUTS STREAMED LIVE ON BREAKFAST AT BREEDERS’ CUP – Presented by the Breeders’ Cup Players’ Show, Breakfast at Breeders’ Cup is streamed on Breeders’ Cup’s official website www.BreedersCup.com, mobile app and Facebook page each day from 7-10 a.m. ET through Thursday. The action-packed program will offer an inside look at how Breeders’ Cup entrants train and prepare for the championship races and will feature interviews with the sport’s most prominent trainers, owners, jockeys and personalities. Airing live from Churchill Downs, the show is hosted by Caton Bredar, Joe Kristufek, Gabby Gaudet and Brandon Stauble.


NATIONAL WEATHER SERVICE FORECAST – On Sunday at Churchill Downs, the main track was rated “fast” and the Matt Winn Turf Course (Lane 3, 22 feet off the inside hedge) was rated “good.” Below is the National Weather Service forecast for Louisville through Breeders’ Cup Saturday as of Sunday morning:

Wednesday: Showers likely, then showers and possibly a thunderstorm after 2 p.m. High near 69. Chance of precipitation is 90 %.

Wednesday Night: Showers and possibly a thunderstorm. Low around 51. Chance of precipitation is 90%.

Thursday: Showers likely, mainly before 2 p.m. Cloudy, with a high near 57. Chance of precipitation is 70%.

Thursday Night: A 50% chance of showers. Mostly cloudy, with a low around 41.

Breeders’ Cup Friday: A 20% chance of showers. Partly sunny, with a high near 54.

Friday Night: A 40% chance of showers. Mostly cloudy, with a low around 38.

Breeders’ Cup Saturday: A 20% chance of showers. Partly sunny, with a high near 54.

CHURCHILL DOWNS TO AIR ON TVG THROUGHOUT FALL MEET – Racing from Churchill Downs will air on TVG’s primary broadcast channel throughout the 21-day Fall Meet. Included in the coverage is onsite reports from correspondents Caton Bredar and Gabby Gaudet. TVG is available in more than 40 million homes. 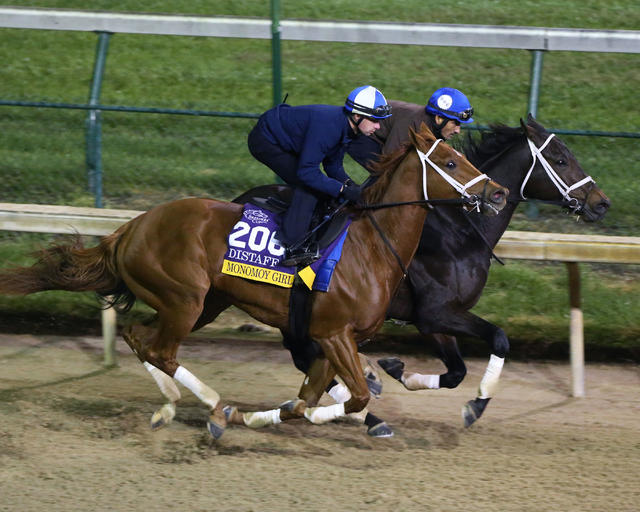