Trainer quotes from the 145th running of the Kentucky Oaks

TOM AMOSS, trainer of Serengeti Empress (1st) – “How about that! I've never won a race this big. I've won a lot of races, but not one like this. I've heard it said that when it happens, it's just a different experience. Today, for me, it was just a rush of emotions. I thought about my mom and dad who are 93 and 94. They're at home watching. I know they saw this today. I can't wait to speak to them. My extended family. I have five brothers and their families. My wife and kids are here. Colleen, my wife, Ashley my oldest daughter and Hailey my youngest daughter. I think, as a team, us four have seen quite a bit as a trainer has. They put up with a lot. I thought about the people along the way.”

WAYNE CATALANO, trainer of Liora (2nd) – “We had a clear shot at her and I thought I was the winner. I was getting a little excited. You know what, this filly was training great. She looks great and everybody did a great job. Channing (Hill) did a really good job today. They let him get in behind and settle and I told him, maybe we’ll come and pick up the pieces and everything he asked her to do, she did. She finished up strong. We just got outrun.”

STEVE ASMUSSEN, trainer of Lady Apple (3rd) – “She ran hard. I’m very proud of her. Between her Fantasy win and her third in the Oaks, she’s proved she’s in the upper echelon of 3-year-old fillies. I still think she has some developing to do physically. She has a great future.”

IAN WILKES, trainer of Champagne Anyone (4th) – “She ran a good race, I’m very proud of her. She was the only filly to close from way back. There was something of a speed bias in the track today. That’s the way it is sometime. The winner was too good.”

SIMON CALLAGHAN, trainer of Bellafina (5th) – “I think that it was the distance that did her in today. I think she wants to run in one-turn races. We’ll give her a break now and refocus on one-turn races. We may look at the Test next. (Test Stakes, 7 furlongs, Aug. 3 at Saratoga.)

TYLER SERVIS, assistant trainer of Jaywalk (6th) – “She got stepped on a little bit coming out of the gate and pulled a little bit of her quarter. I'm sure that compromised her race a little bit. You can't take anything away from the leader, but in hindsight if we let her run away from there a little bit more and be right up there next to Serengeti Empress, maybe there'd be a different story. But at the end of the day, when it came down to running, she didn't do any running."

LARRY JONES, trainer of Street Band (7th) – “"I don't know. The biggest thing we had, if I have to fault anything is that she just still would not relax the way we would like her to. I would have liked to have seen her waste less energy in the post parade. The Fair Grounds horses did extremely well, so I was tickled to death that the Fair Grounds Oaks was carrying its weight. Those two had shown an affinity for Churchill Downs and that's important. You always hope your horse likes Churchill, but maybe some better than others. We will figure out more two or three races down the road. She seems like she's a bounce and bounce back kind of horse; every other race is really good. I can't go home crying. Everything was OK. We just didn't get the run we would have liked."

MARK CASSE, trainer of Chocolate Kisses (8th) – “(Julien Leparoux) had a good trip. He said she was traveling good. We had no excuse. She had a beautiful trip.”

TOM VAN BERG, trainer of Motion Emotion (9th) – “We thought she’d rate, but when Mike (Smith) took a hold of her she threw her head and went. We may have been better off if we just let her go. He was riding her from the five-sixteenths and it just wasn’t there today. The track was probably heavier than she liked. Now we’ll just have to go back to the drawing board and make another plan.”

ALEXIS DELGADO, trainer of Jeltrin (10th) – “It wasn't a good break from the gate for my filly. She wasn't ready for it to open. She is a good gate horse and usually gets good position."

DALLAS STEWART, trainer of Out for a Spin (11th) – "He had her in a good spot. She just didn't fire. She came back healthy. We will take a look at her."

BOB BAFFERT, trainer of Flor de La Mar (12th) – “She got shuffled back at the start and never responded.”

KENNY MCPEEK, trainer of Restless Rider (13th) – Did not wish to comment

RODOLPHE BRISSET, trainer of Positive Spirit (DNF) – “Manny’s OK, the horse is OK, that’s the important thing. She’s back at the barn; they caught her real quick. We will come back another day.” 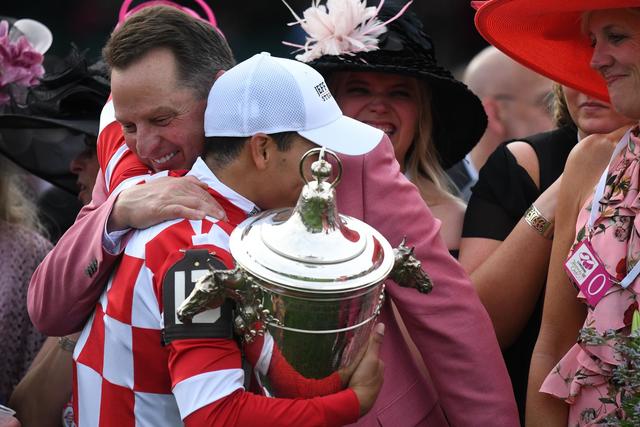