MEDINA SPIRIT Trainer Bob Baffert, (First): “This little horse coming in here, he’s always shown he’s an overachiever. His heart is bigger than his body. When he turned for home, something just told me. He reminded me of Silver Charm (Baffert’s 1st Derby winner). He doesn’t know how much he cost. He wouldn’t let anyone pass him. Mr. Zedan wanted to come to the Derby with a $45,000 horse. I thought we’d see what happens. This horse, the way he ran, I didn’t know he had it in him. Johnny Velazquez is unbelievable. He’s so cool. He told me last night not to underestimate this horse. He’s better than you think.”

MANDALOUN Trainer Brad Cox, (Second): “He ran huge. He saved ground along the inside, battled and battled hard, thought he had a shot to win it there, We just came up a little short.”

HOT ROD CHARLIE Trainer Doug O’Neill, (Third): “I’m proud; very proud. He ran huge. It looked to me like he had a good trip. But Flavin (rider Flavien Prat) might have a different take on that. We’re honored and blessed to have a horse like this. I’m so proud of him. And know for sure that he’ll be back..”

ESSENTIAL QUALITY Trainer Brad Cox, (Fourth): “He didn’t get the greatest trip as he was wide around both turns. That can happen when you start from the 14 hole, especially when don’t get off to a good start. He was leaning out on the far turn and Luis (Saez) said he was shying away from the other horses. We will just have to regroup. Proud of both horses. They trained well and just wish the order of finish was just a little different.”

O BESOS Trainer Greg Foley, (Fifth): “I’m so proud of our horse. He tried so hard. We got a great trip. He settled well after getting a little rank going down the stretch.”

MIDNIGHT BOURBON Trainer Steve Asmussen, (Sixth): “We missed the break and that’s the only thing I thought he’d do right.”

KEEPMEINMIND Trainer Robertino Diodoro, (Seventh): “The one thing we wanted was to get him back to his old ways and he relaxed the way we wanted. David (Cohen) said they started moving so fast he had to swing him out wider than we wanted. No excuses. We’re happy with the horse. You don’t want to be happy with seventh, but we are.”

KNOWN AGENDA, Trainer Todd Pletcher, (Ninth): “He never got into position. He made a move around the far turn but got shuffled back. I’m going to have to watch the replay.”

HIGHLY MOTIVATED Trainer Chad Brown, (10th): “I thought I got a great trip, into the first turn and down the backside, and he just didn't fire today. I thought I got a hot setup and I wanted to be just behind that and that's where we were. He got over early, he saved ground on both turns; I got a dream trip. I hate to waste that kind of trip in the Derby on a horse that didn't fire today. It is what it is and we'll just have to regroup."

SAINTHOOD Trainer Todd Pletcher, (11th): “He never got into position.”

LIKE THE KING Trainer Wesley Ward, (12th): “It was a great experience. The big question mark was if he would like the dirt. He worked great leading up to the race. We were very happy with the day but his future will be on the grass.”

BOURBONIC Trainer Todd Pletcher, (13th): “He never got into position… I’m going to have to watch the replay.”

HIDDEN STASH Trainer Vicki Oliver, (14th): “He looks like he came out of it OK. He ate a lot of dirt but we scoped him and he’s fine. I just jogged him in the shedrow and he’s tired but he should be OK. He ran his race. Rafael (Bejarano) said he broke real good, but he had to check him several times. Horses were in front of him and there was nowhere to go.”

BROOKLYN STRONG Trainer Danny Velazquez, (15th): “It’s a tough load with 20 horses. You’re in there a long time. Umberto (Rispoli) said he wasn’t standing correctly and he broke a little slow. Our horse was really trying. No harm, no foul. If he comes back OK, we’ll go to the Belmont.”

ROCK YOUR WORLD Trainer John Sadler, (17th): “We got squeezed at the start and we were done. No chance.”

DYNAMIC ONE Trainer Todd Pletcher, (18th): “We could never get in positon.”

SOUP AND SANDWICH Trainer Mark Casse, (19th): “We’ll regroup and see where we go from here.” 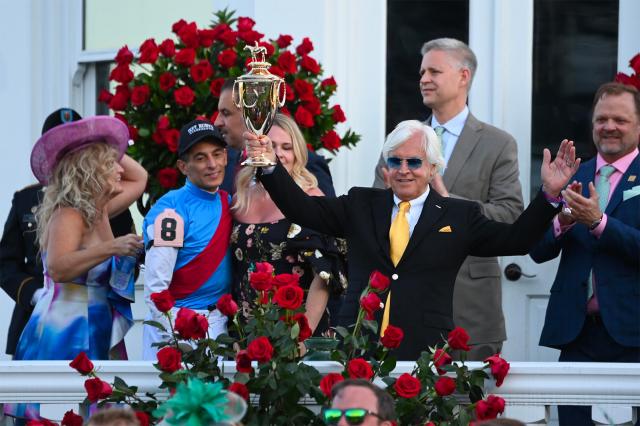