Trainer Quotes From The 148th Running Of The Kentucky Derby 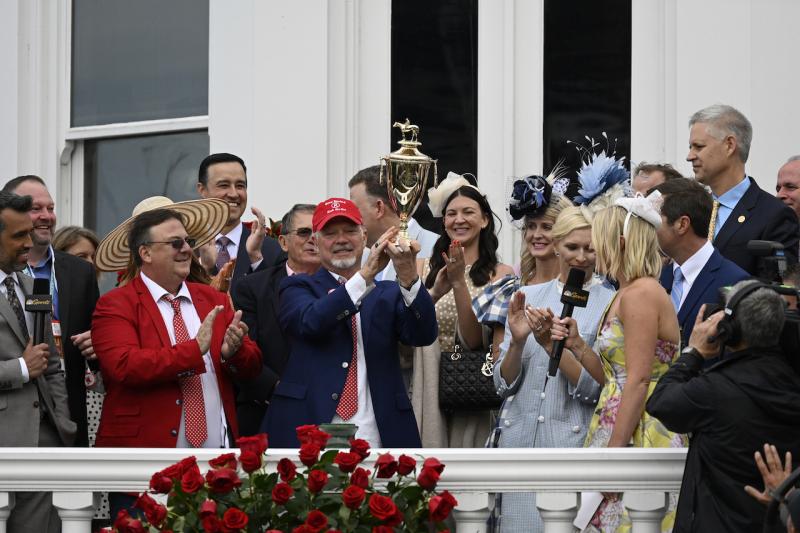 Eric Reed, trainer of Rich Strike (First) – “He passed them all. I’m elated. I’m happy because this horse trained good enough to win. This rider (Sonny Leon) has been on him all along as he learned the process. He taught him to go between horses. He taught me who to train horses (pointing to his father, Herbert). I’m surrounded by the best. I didn’t think I could win necessarily but I knew if he got it, they’d know who he was when the race was over.”

Steve Asmussen, trainer of Epicenter (Second) – “I can’t believe it after Epicenter’s effort. And, the scenario in which I went 0 for 24, you couldn’t make up. I got beat by the horse that just got in.”

Chad Brown, trainer of Zandon (Third) – “We really had a great trip. Epicenter was in front of us closer to the pace and Flavien (Prat) really just followed Joel (Rosario) all the way. Turning for home he was in a great position and was really battling with Epicenter. (Rich Strike) just snuck up our inside and we were third best.”

Antonio Sano, trainer of Simplification (Fourth) – “We were pretty far back early but he made a huge run. We’re very proud about the effort.”

Todd Pletcher, trainer of Mo Donegal (Fifth), Charge It (17th) and Pioneer of Medina (19th) – “Mo Donegal all but lost it at the gate. That’s the second year in a row that’s happened to us, even though that new gat gets them further off the rail. But to his credit, he kept trying to the end. Charge It got in a good spot, he came under a drive at the three-eighths pole but that was it. Pioneer of Medina got hot in the paddock. I didn’t get much of a line on him in the race.

John Ortiz, trainer of Barber Road (Sixth) – “We still need more ground. I always thought he was a Belmont horse. We knew we had to go wide. Traffic is what we had to avoid. It was awesome. I love the effort. I love what Reylu (Gutierrez) did. I couldn’t be happier right now.”

Brad Cox, trainer of Tawny Port (Seventh), Zozos (10th) and Cyberknife (18th) – “Tawny Port finished up OK; Cybernife super disappointed; Zozos was too close to the hot pace. No doubt that was a really hot pace. I’m not sure where this horse was he must have been in the back somewhere. No matter how good you look breezing or in the mornings, you have to have the right setup. And this horse had the right setup today. We’ll live to fight another day.”

Kenny McPeek, trainer of Smile Happy (Eighth) and Tiz the Bomb (Ninth) – “What a crazy Derby. I’ll have to watch the replay and see how it all unfolded.”

Brian Lynch, trainer of Classic Causeway (11th) – “It was not the cleanest break and he got shuffled back. It was a roughly run race and Julien (Leparoux) could never get a run going. We’ll regroup and give him some time to recover. But certainly the Preakness is not in our plans.”

Leondro Mora, assistant trainer of Happy Jack (14th) – “Rafael (Bejarano) told us that his tail got caught in the back of the gate when he was fussing before the start. Thank goodness they backed him out and when they released the back gates, his tail came free.”

Saffie Joseph Jr., trainer of White Abarrio (16th) – “He made it out in one piece. It’s hard but that’s racing. An 80-1 shot winning, unbelievable. Congrats to them.”

Bhupat Seemar, trainer of Summer Is Tomorrow (20th) – Couldn’t be reached for comment.