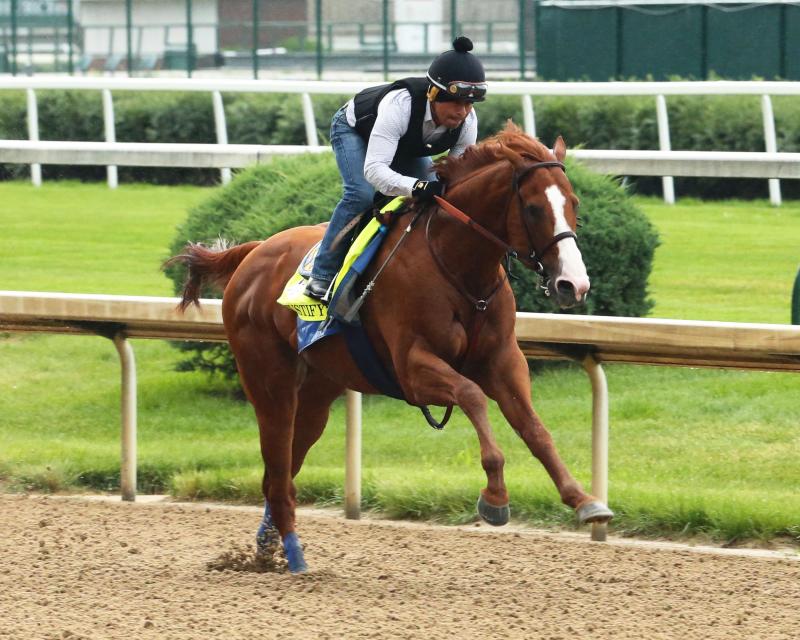 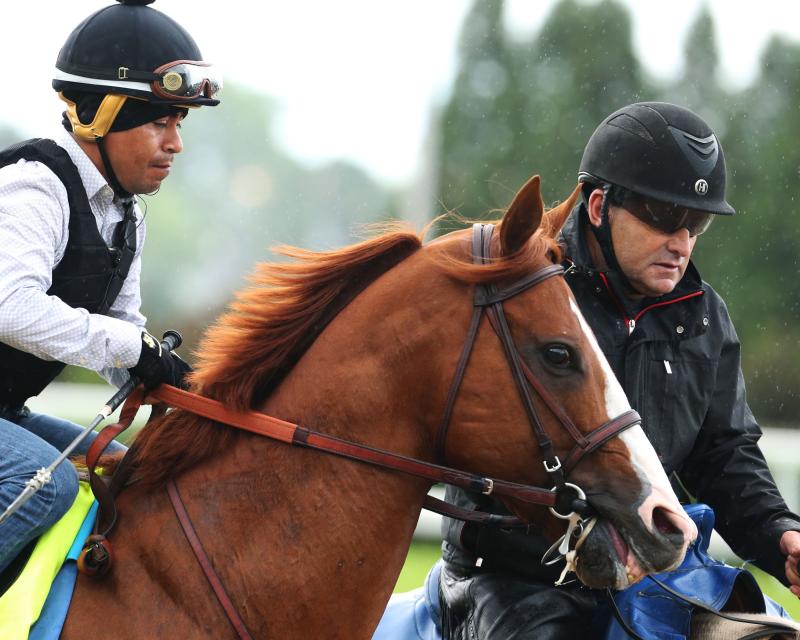 Undefeated Kentucky Derby (Grade I) and Preakness Stakes (GI) winner Justify tuned up his preparation for the June 9 Belmont Stakes (GI) with a rapid half-mile breeze in :46.80 Tuesday morning at Churchill Downs.

With Hall of Fame trainer Bob Baffert on hand, Justify breezed at 7:30 a.m. with California-based jockey Martin Garcia aboard through splits of :12, :23.60 and :35.20 before galloping out five furlongs in :59.60 over the “fast” main track, according to Churchill Downs clocker John Nichols. Light rain fell during the breeze.

He worked really well,” Baffert said. “The trackman (Jamie Richardson) did a great job with the track this morning with some impeding rain. Martin knows how to breeze the horse so I flew him in from California. (Justify) warmed up really nice. I basically didn’t say anything on the radio to Martin after I asked him how he was warming up. He went in a nice grove.

"We let him gallop out a little further past the five-eighths pole, he took a big breath and turned around to go back to the barn. I’m really happy. It’s what you want to see. I knew yesterday the way he galloped he was ready to do something. The day before he didn’t get to do much with the rain and he may not get to do much this week because of (possible) rain as well.

“American Pharoah looked like that. That’s what you want to see with another week to go before the Belmont. He looked really good and in great shape. He’s moving forward and held his weight for being a massive horse. I went to see Pharoah yesterday. He got really big and I was really emotional when I was there. I asked him if it was okay if another horse broke his record and he didn’t seem to have a problem with it.”

After the workout, Baffert was scheduled to return to his California home but will return to Louisville later this week before Justify’s final breeze in advance of the Belmont Stakes.

“I’ll head back to California today and come back either late Saturday or Sunday and possibly breeze on Monday before we leave for New York Wednesday (June 6).”

Also stabled in Baffert’s Barn 33 at Churchill Downs is Belmont probable Restoring Hope, who breezed seven furlongs from the five-furlong pole in 1:26 with jockey Florent Geroux aboard.

“I thought he worked really well,” Baffert said. “He’s a really competitive horse and is honest on the track. We were disappointed how he ran in the (May 5) Pat Day Mile but I don’t think he liked the sloppy track.”

Justify is scheduled to walk the Barn 33 shedrow Wednesday morning and could return to the track as early as Thursday.

Area horse racing fans are invited to watch those colts train from the first floor of the facility free of charge. Churchill Downs Racetrack will open its Paddock Gate entrance between 7-8 a.m. each morning so the public can watch Kentucky Derby and Preakness winner Justify along with rivals Bravazo, Free Drop Billy, Restoring Hope and Tenfold prepare for the 1 ½-mile third jewel of horse racing’s Triple Crown – the 150th running of the $1.5 million Belmont Stakes (Grade I) on Saturday, June 9.

Video of the exercises will be shown on the Big Board and infield video screens at Churchill Downs. Those unable to attend can watch an online live stream of the daily exercises with commentary on the Kentucky Derby Facebook (www.facebook.com/KentuckyDerby), Twitter (www.twitter.com/kentuckyderby) and at www.KentuckyDerby.com/Works from 7:20-7:45 a.m., thanks to TwinSpires.com, the country’s leading online and mobile betting platform and official betting partner of Churchill Downs, the Kentucky Derby and Breeders’ Cup World Championships. Also, clips of the activity will be uploaded on the Kentucky Derby YouTube channel.

The six-furlong Aristides, named after the first Kentucky Derby winner in 1875, is the first of two stakes events on Saturday’s 11-race Downs After Dark Presented by Budweiser program. The first race is 6 p.m. (all times Eastern). The Aristides goes as Race 10 at approximately 10:42 p.m. and the third running of the $75,000-added Mighty Beau Overnight Stakes, a five-furlong turf sprint, is Race 11 at approximately 11:10 p.m.

Trained by two-time Aristides-winning trainer Chris Hartman (note: he won the 2015-16 Aristides with millionaire Alsvid), Wilbo most recently finished second behind Whitmore in the $400,000 Count Fleet Sprint Handicap (GIII) at Oaklawn Park on April 14. Wilbo was the runner-up in the 2017 Aristides behind multiple Grade I winner Limousine Liberal. The 6-year-old gelding previously won the 2017 Don Bernhardt Stakes at Ellis Park and the Feb. 3 King Cotton at Oaklawn. Jockey David Cabrera is scheduled to travel from his spring base at Prairie Meadows in Iowa to Kentucky for the mount and will break form Post 3.

Chief among Wilbo’s challengers is impressive allowance winner Mr. Crow. Trained by Ben Colebrook, who won the 2017 Aristides with Limousine Liberal, Mr. Crow was victorious by two lengths in a six-furlong allowance race on May 1 at Churchill Downs with a swift final time of 1:09.24. Corey Lanerie picks up the mount on Mr. Crow and will break from Post 5.

Churchill Downs admission gates will open Saturday at 5 p.m. General Admission is $10, reserved seating is $25 and reserved dining packages start at $73. Tickets can be purchased in advance online at ChurchillDowns.com/Tickets. Guests are encouraged to dress in bright, neon colors for the theme “Neon Nights.”

DOWN THE STRETCH – After dark days on Tuesday and Wednesday, racing at Churchill Downs will continue on Twilight Thursday with an eight-race program at 5 p.m., highlighted by $1 beer, local food trucks and blues music by Laurie Jane and the 45s. … Thursday will showcase a massive $672,486 carryover in the 20-cent Single 6 Jackpot that gets underway in Race 3 at 5:58 p.m. 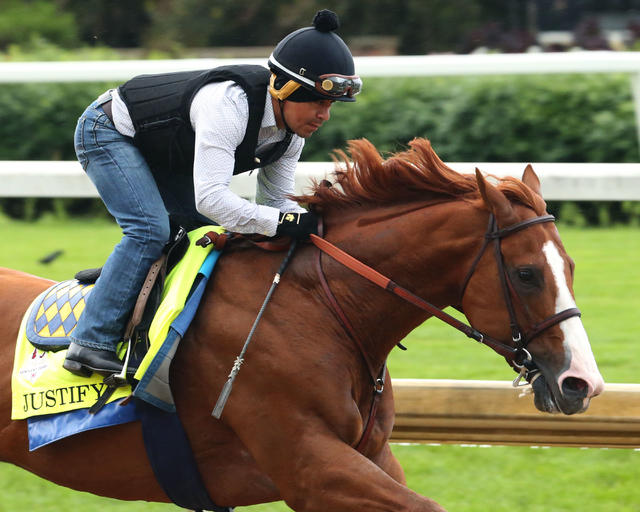