Trained by Mike Maker, Stunning Sky recorded a half-length score at odds of 5-1 over fellow Mrs. Revere rival Princess Grace in the 1 1/16-mile Valley View on Oct. 16. Stunning Sky, a 3-year-old daughter of Declaration of War, will be hoping for a fast pace after closing from more than six lengths behind the early pace in her last start on the Keeneland turf course. Claimed for $50,000 in her second start from trainer Jorge Abreu last December, Maker spotted Stunning Sky against stakes company in eight of her last nine starts. She finished second in the $150,000 Lake Placid (GII) and $500,000 Saratoga Oaks prior to her Valley View score.

Ricardo Santana Jr., who has teamed with Maker to win with nine of 36 starts this year, has the call on Stunning Sky and will break from post position No. 3.

The Top 4 finishers of the Valley View were entered in the Mrs. Revere as they seek revenge against Stunning Sky. Susan and John Moore’s lightly raced Princess Grace will be attempting to turn the tables against her Valley View rival in just her fourth lifetime start. Trained by Mike Stidham, Princess Grace dominated her first two starts at Colonial Downs and Monmouth, respectively. In the Valley View at odds of 7-1, Princess Grace held a 1 ½ length lead at the top of the stretch but could not hold off the late surge from Stunning Sky.

Jockey Florent Geroux will be in the saddle for the Mrs. Revere from post 4.

Finishing just one-length behind Stunning Sky and a half-length back of Princess Grace in the Valley View was G. Watts Humphrey’s How Ironic. The homebred daughter of Tonalist drew post 5 with Rafael Bejarano in the saddle.

The Mrs. Revere is named in tribute to the highly competitive filly who collected a total of four Churchill Downs stakes during the two-year span of 1984-85. Mrs. Revere won three stakes in total during her 3-year-old season, thus providing the appropriate name for this stakes for 3-year-old fillies on the turf. Mrs. Revere was owned by the partnership of Dr. Hiram Polk and Dr. David Richardson.

THIS WEEK AT CHURCHILL DOWNS – Racing at Churchill Downs continued on Wednesday for a five-day week with daily first posts of 1 p.m. (all times Eastern). Among the highlights for the week of racing is Saturday’s $200,000 Mrs. Revere (GII) for 3-year-old fillies at 1 1/16 miles on the Matt Winn Turf Course.

Following steady overnight rain in the Louisville area on Tuesday, racing on the turf was taken off Wednesday. The temporary rail setting will remain in Lane 2 (15 feet from the inside hedge) for racing on Thursday and Friday. The rail will be taken down on Saturday and Sunday.

Thursday’s 10-race program will see the turf debut of Kentucky Derby (GI) 12th place finisher Winning Impression. Trained by Dallas Stewart, Winning Impression attempted to run on the turf twice in the early stages of his career but both races were moved to the main track. The 1 1/16-mile first-level allowance event is carded as Race 9 with a post time of 5:06 p.m.

Friday’s card will feature a $92,000 conditioned allowance event at 1 1/16 miles on the turf course. The wide-open field of veteran horses will showcase the highly-touted European import Set Piece (GB) for trainer Brad Cox. Set Piece, a group-stakes placed runner under previous conditioner Hugo Palmer, won his stateside debut in June at Churchill Downs. In his two subsequent starts, the son of Dansili finished sixth but will add blinkers for Friday’s event. Also entered in the body of the field are stakes winners Louder Than Bombs, Marzo and Temple along with stakes-placed Bizzee Channel, Cullum Road, Midnight Tea Time, Net Gain and Ritzy A.P.

Sunday’s entries will be taken on Thursday.

DOWN THE STRETCH – There was a $91,134 carryover in the 20-cent Single 6 Jackpot for racing on Wednesday. First post was 1 p.m. and the Single 6 spanned Races 4-9. … Breeders’ Cup winners Essential Quality, Knicks Go, Monomoy Girl and Whitmore have all returned to Churchill Downs. … Trainer Mark Casse was three wins away from 3,000 career victories. He had one scheduled starter on Wednesday at Churchill Downs. … The main track was rated “sloppy” for training on Wednesday but upgraded to “fast” prior to the first race. … Wednesday is Veterans Day and Churchill Downs salutes and thanks all of the members of the military who are actively serving or who have served our country. Several local trainers have served our country including Rick and Jeff Hiles, Gary “Red Dog” Hartlage, Neil Howard, Mark Simms Jr., and Will VanMeter. 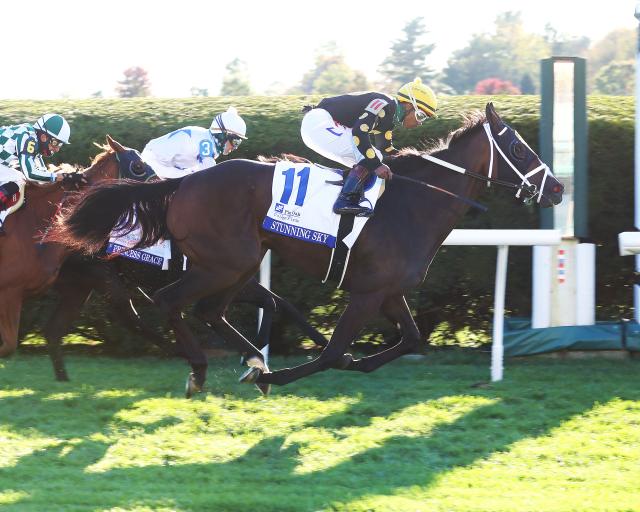