J. Kirk and Judy Robison’s Vertical Oak , sent to post as the even-money favorite, overcame early adversity and rallied late to run down Astrollinthepark in deep stretch to win Saturday’s 10th running of the $100,000 Open Mind (Listed) for fillies and mares at Churchill Downs by three-quarters of a length.

Trained by Steve Asmussen and ridden by Ricardo Santana Jr., Vertical Oak clocked six furlongs on a fast track in 1:10.16 to give the trainer and jockey their third win together in the race. Previously, they won the Open Mind with Vuitton (2013) and Aireofdistinction (2014).

Breaking from post position 3 in the field of seven fillies and mares, Vertical Oak was unexpectedly out-footed at the break as Courtmewithcarats shot to the front with Miss Kentucky tracking in second, Our Majesty trying to keep up and Astrollinthepark stalking from the outside. Vertical Oak was shuffled back to sixth as Miss Kentucky and Astrollinthepark closed to draw even with the leader on the far turn, who clocked an opening furlong in :21.74. After a half-mile in :45.70, Astrollinthepark spurted clear at the top of the stretch but Vertical Oak, who swung to the outside to commence a late run, rolled in the lane to just get up inside the final 100 yards.

The victory was worth $60,760 and increased Vertical Oak’s earnings to $630,030 with a record of 7-3-3 from 18 starts. Vertical Oak is a Kentucky-bred daughter of Giant Oak out of the Pollard’s Vision mare Vertical Vision, and was bred by Millennium Farms.

It was another neck back to Thirteen Songs, who was followed in order by Courtmewithcarats, 3-1 third betting choice Miss Kentucky and Our Majesty.

This was Vertical Oak’s fifth career stakes win. Her most notable triumph came in last year’s Prioress (Grade II) at Saratoga. In her most recent start, Vertical Oak finished second to Finley’sluckycharm in Saratoga’s Honorable Miss (GII) on July 25.

Saturday’s race saluted the late Eugene Klein’s Hall of Fame filly Open Mind, the D. Wayne Lukas-trained winner of the 1988 Breeders’ Cup Juvenile Fillies (GI) at Churchill Downs who returned to the Louisville track the following spring to win the Kentucky Oaks. The New Jersey-bred filly was an Eclipse Award champion at ages two and three. A winner of 12 races and $1,844,372 in 19 starts, the daughter of Deputy Minister was enshrined in Racing’s Hall of Fame in 2011.

Ricardo Santana Jr., jockey of VERTICAL OAK (winner): “I thought there would be a lot of speed in this race today. So, Steve and I talked and said to break from the gate and see what happens. I had all the confidence in the world in my filly that she would be okay coming from off the pace.”

Steve Asmussen, trainer of VERTICAL OAK (winner): “She really showed some maturity today. We’ve tried to get along with her all along but she’s always been a bit headstrong. It’s very nice to see her be able to rate behind horses as she did today.”

Gabriel Saez, jockey of ASTROLLINTHEPARK (runner-up): “She ran a nice race. It was disappointing not to get the win but she tried hard.” 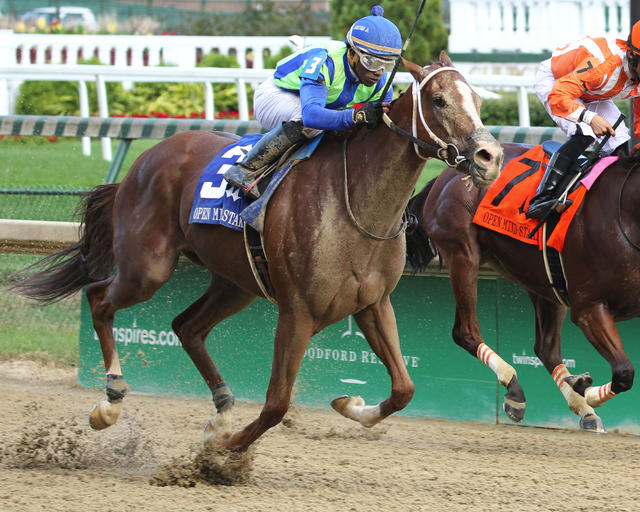