Amerman Racing Stables’ veteran homebred Admission Office made his 7-year-old debut a winning one as newly-gelded son of Point of Entry ran down pacesetter Get Smokin at the wire to win Saturday’s 86th running of the $197,500 Arlington (Grade III) at Churchill Downs by a head.

This marked the first year the Arlington has been run at the Louisville racetrack after previously being staged at the now-closed Arlington Park.

The only two graded stakes wins of his career have come on turf at Churchill Downs. Two years ago, Admission Office won the 1 ½-mile Louisville (GIII).

Admission Office, who made his first start in 462 days, was rated in last of six older horses as Get Smokin dictated the terms through early splits of :23.82, :48.77, 1:13.44 and 1:37.24. Admission Office, who remained in last with three-sixteenths of a mile to run, continued to grind down the lane with a wide move and surged at the wire to prevail in a tight photo finish.

“He just kept finding more and more with each stride,” Velazquez said. “He was sitting in a good trip and relaxed off the pace. I tipped him in the clear mid-stretch and he kept accelerating.”

Floriform, the 8-5 favorite under Tyler Gaffalione, was another length back in fourth and was followed by Like the King and Gray’s Fable.

“Being off a layoff, to run like that was phenomenal,” Lynch said. “I thought we had a lot of horse when Johnny turned for home. I’m really thankful for the Amermans for being patient with him getting back to the races. He kept having a few setbacks and it took us a little longer to get back to the track. He’s always had a lot of talent and has run in some serious races in the past. To show up and perform like that against these horses didn’t surprise me because of his back class.”

Admission Office, out of the Royal Academy mare Miss Chapin, was bred in Kentucky by Mrs. Jerry Amerman.

“I’d think staying here for a race like the Wise Dan would be the next move,” Lynch said. 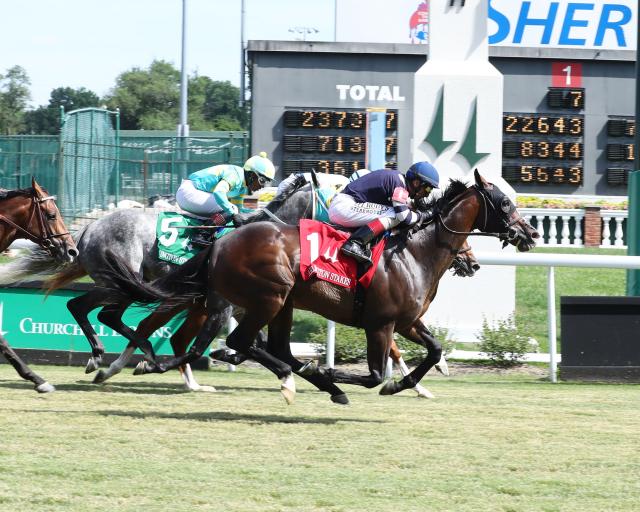