Whitham Thoroughbreds’ homebred Walkathon collared pacesetter Lola Flo leaving the final turn, opened a clear lead at the top of the stretch and turned back a late run by 4-5 favorite McKulick (GB) to win Saturday’s 53rd running of the $200,000 Regret Stakes (Grade III) at Churchill Downs.

The 3-year-old Ian Wilkes-trained filly, who covered 1 1/8 miles on “firm” turf in 1:49.26, gave jockey Julien Leparoux his 1,000th win at Churchill Downs – one of only five jockeys to achieve the milestone.

In the early stages of the race, 32-1 longshot Lola Flo led the field of six 3-year-old fillies through opening fractions of :24.19, :48.46 and 1:12.91 with Walkathon drafting about 1 ½ lengths behind in second, and the favored McKulick (GB) another couple of lengths back in fourth.

Walkathon was the first to make a move around the turn. She got the jump on her rivals and kicked about five lengths clear at the head of the stretch, which proved to be the winning move to hold off the closing McKulick (GB), who cut the final margin to 1 ¼ lengths.

“She can be a bit hyper and get worked up but that’s just who she is,” Leparoux said. “In the race she was able to settle in a good position off (Lola Flo) and she was full of run at the end. I couldn’t ask for anything more. She loves this turf and has really shown that her last few starts.”

Kneesnhips was fourth and was followed by Candy Raid and Lola Flo.

“First off I have to congratulate Julien on his 1,000 wins at Churchill,” Wilkes said. “That’s quite the accomplishment and he gave this filly a great trip. She was settled just off the speed in a perfect position. Julien kept her in the clear and she was able to have the perfect trip to the wire.”

Walkathon is a daughter of Twirling Candy out of the Stroll mare Walkabout and was bred in Kentucky by her owner, Janis R. Whitham.

The next turf race at Churchill Downs for 3-year-old fillies is the $200,000 Tepin over one mile on Saturday, July 2. 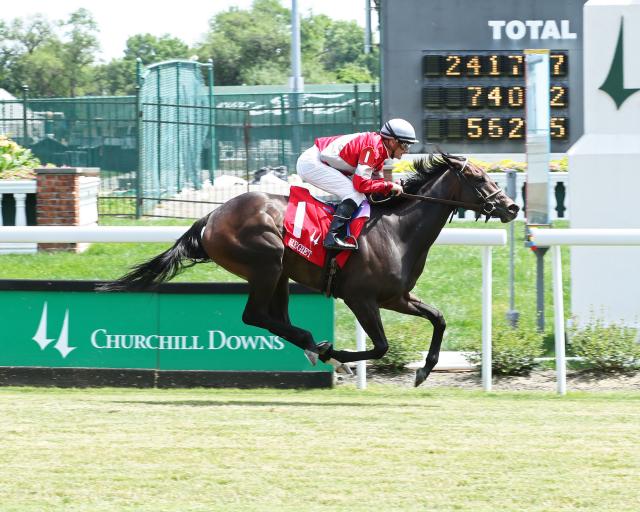