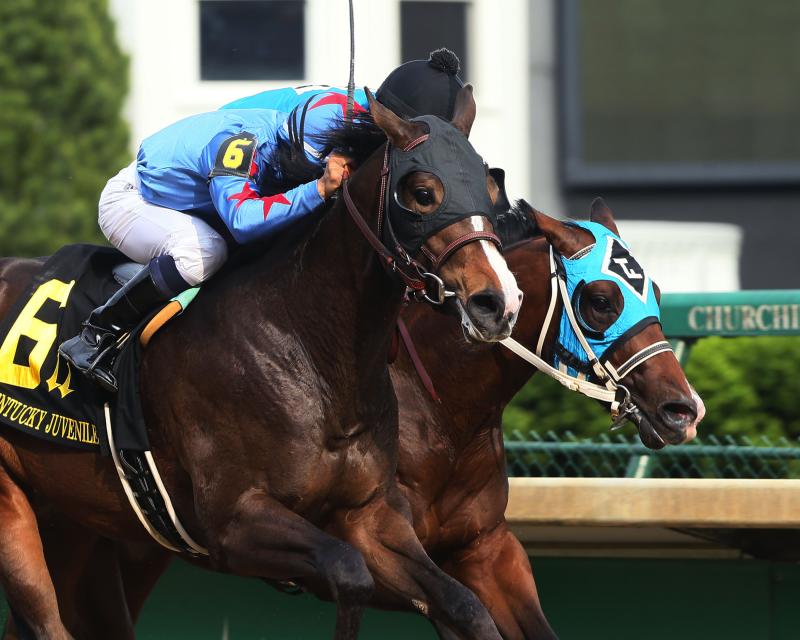 A record Thurby crowd of 48,134 cheered as John Ennis’ Weiland (left) edged Myhotrodlincoln by a head to win the 25th running of the $100,000 Kentucky Juvenile for 2-year-olds at Churchill Downs. (Coady Photography/Churchill Downs) 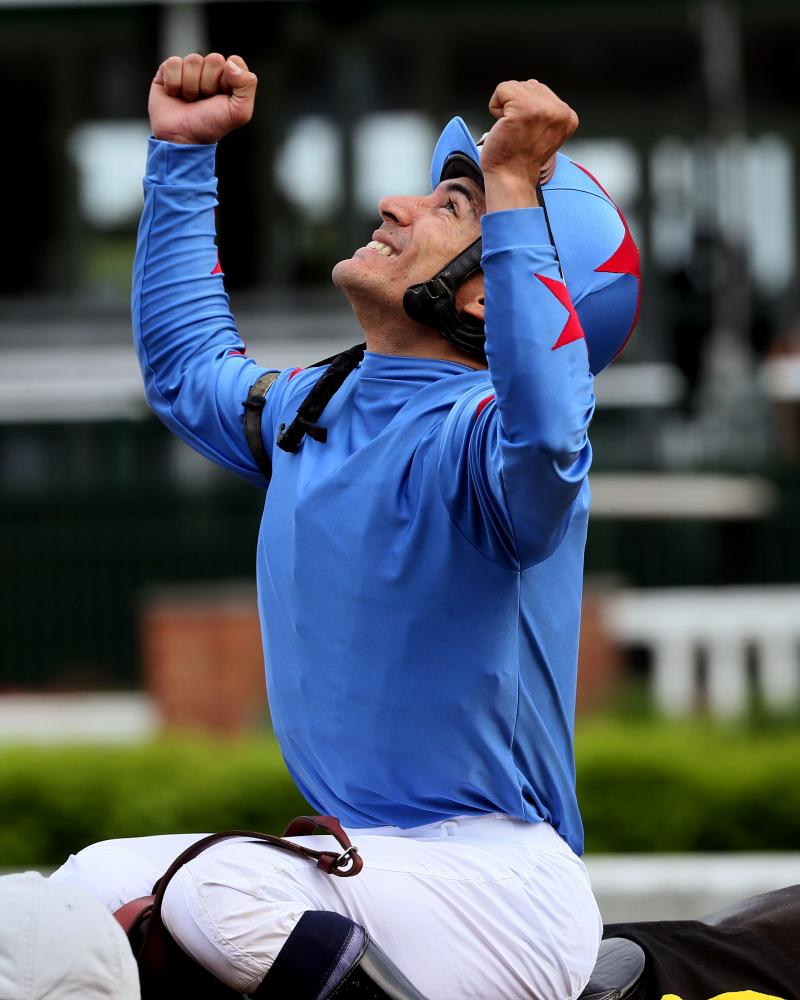 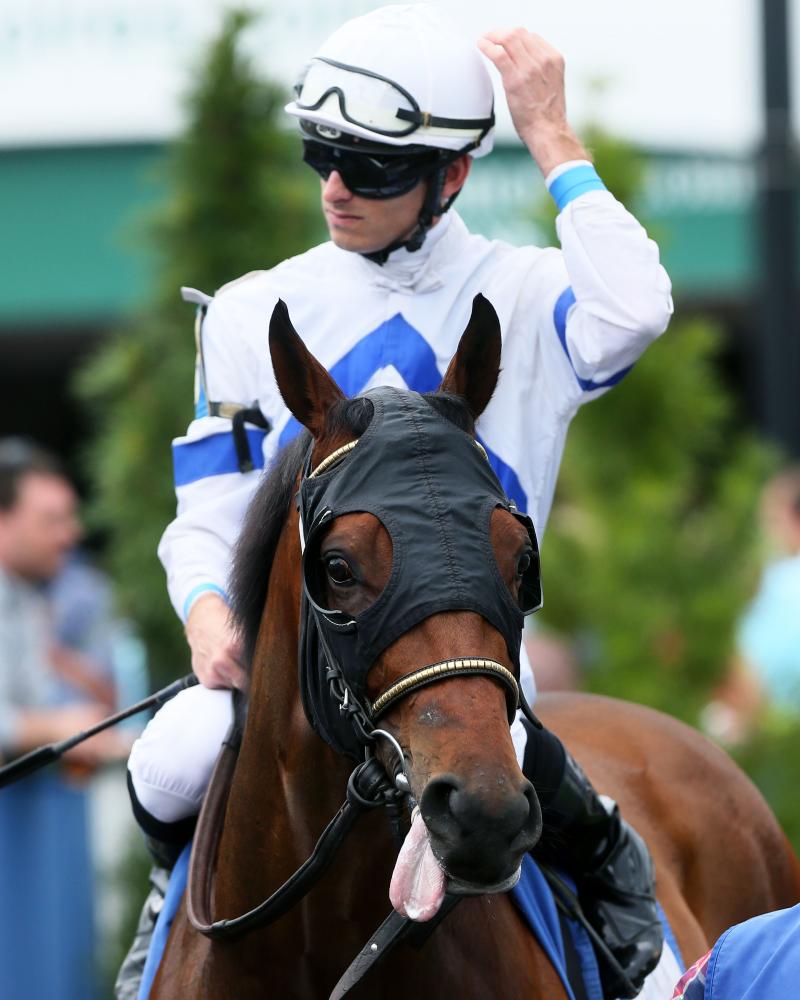 Jockey Chris Landeros celebrated as he returned to the winner's circle aboard Tuf Stable's Mr Cub following the victory by the Ian Wilkes-trainee in the 13th running of the $71,600 Opening Verse overnight stakes. (Coady Photography/Churchill Downs)

John Ennis’ Weiland outgamed Myhotrodlincoln by a head to win the 25th running of the $100,000 Kentucky Juvenile for 2-year-olds before a record Thurby crowd of 48,134.

Trained by Ennis and ridden by Carlos Villasana, Weiland covered five furlongs on a fast main track in :59.32. It was the first career stakes win for Ennis.

Myhotrodlincoln set the pace with Weiland racing just to his outside. The two separated themselves from the field of seven quickly and duo dueled as a team through the stretch with Weiland edging clear at the wire.

Favored Luv This Lifestyle finished another head back in fourth and was followed in order by Derby City, Blazin Liason and Mr. Granite.

Earlier on the Thursday program, Turf Stable’s Mr Cub swept past dueling leaders Shakhimat and Trust Factor at the head of the stretch and cruised to a 1 ¼-length victory over First Premio in the 13th running of the $71,600 Opening Verse overnight stakes.

Mr Cub is a 4-year-old Kentucky-bred son of Artie Schiller out of the Mineshaft mare Fine Line.

Carlos Villasana (rider of Weiland, winner) – “I had a good start and was in a good position. I always had a lot of horse. He was a little green and there was a little bumping, but I really wanted to win and he gave me a great run.”

John Ennis (owner/trainer of Weiland, winner) – “I thought the odds didn’t do him justice. He’s a nice colt. He had run well at Keeneland and was on target to improve off his first career start. He’ll improve off this one. He’s an honest, gutsy colt and there is more to come from him.”

Robby Albarado (rider of Myhotrodlincoln, runner-up) – “He ran good; he ran really good. This is a nice colt.”

James Graham (rider of Baytown Mecca, third) – “If he had had one more race, he would have been right there with these horses. The blinkers helped and I had a really strong gallop-out. He was the only one galloping out at the end and I made up six lengths in the last sixteenth of a mile.”

Joel Rosario (rider of Luv This Lifestyle, beaten favorite, fourth) – “She broke a little slow and going five furlongs that is tough to make up any ground. She still tried hard but if we were able to break a little better the outcome would’ve been different.”

Chris Landeros (rider of Mr Cub, winner) – “I had a good trip, it set up nice. The first couple horses kind of went out there and ding-donged it head and head the first half. I just bided my time and let him take a deep breath. He’s doing good right now, he puts you in a good spot and he’s doing really well. He gave me a good punch for the end. I thought I’d be one-two-three (on or just off the pace). I didn’t expect them (the leaders) to go head and head like that, but it worked out nice for me today. So I took the hand I was dealt and bided my time and it worked out today.”

Ian Wilkes (trainer of Mr Cub, winner) – “It was a good set up. The horse just sat off the speed up front. Last time we went to the lead. This horse is very versatile. He was always not a good work horse, but he’d show up on game day and run his race. For some reason, just recently he’s turned into just a monster work horse. He went to another level. I told Rusty Jones, who owns him, that he’s like a horse that’s become a stake horses. Off this race, I’d have to look at the Wise Dan (GII, at Churchill Downs, June 16). It’s in his own backyard and he’s doing good.”

Florent Geroux (rider of First Premio, runner-up) – “My horse ran a very good race, but at the end the winner was too far in front.”

Corey Lanerie (rider of Flatlined, third) – “He runs from the back, that’s just the way he is. He did it today and ran good. He did what he could.” 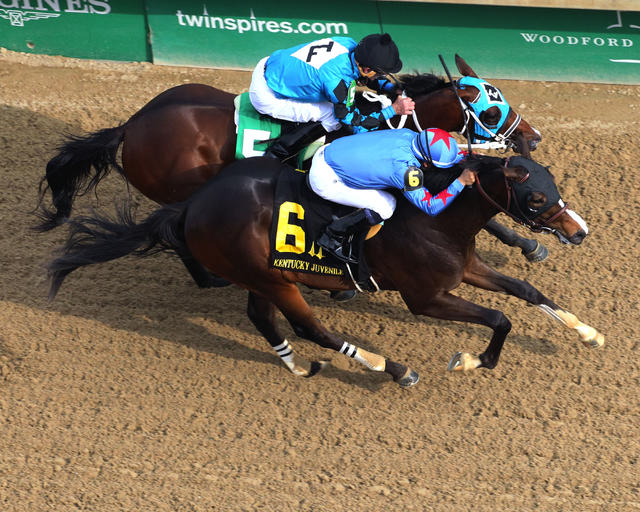