May 3, 2019
| Churchill Downs Communications
LOUISVILLE, KY (Friday, May 3, 2019) – Michael Dubb, Madaket Stables and Bethlehem Stables’ World of Trouble dominated six overmatched foes by cruising to a 3 ¾-length victory in the 25th running of the $250,000 Twin Spires Turf Sprint (GII) Presented by MassMutual for 3-year-olds and up.
Trained by Jason Servis and ridden by Manny Franco, World of Trouble covered the 5 ½ furlongs on a firm Matt Winn Turf Course in 1:03.97. The winner’s share of $151,900 made World of Trouble a millionaire with career earnings of $1,043,300.
The margin of victory was the largest in the history of the race.
World of Trouble shot out to the lead out of the gate and led the field through fractions of :23.07 and :46.08 while maintaining a daylight advantage. Turning for home, World of Trouble encountered no challenges as he improved his record to 12-8-2-1.
Second in the Breeders’ Cup Turf Sprint (GI) here last fall, World of Trouble returned $2.60, $2.40 and $2.20. Smart Remark rallied for second under Joel Rosario and paid $14.40 and $7.60 with Chaos Theory finishing another neck back in third and returning $3.80 to show under Javier Castellano.
It was another head back to Undrafted with Angaston, defending champion Will Call and Jazzy Times following in order.
TWIN SPIRES TURF SPRINT QUOTES
MANNY FRANCO (rider of World of Trouble, winner) – “He’s such a classy horse. I’ve been on him in the past and I knew how fast he was. All credit goes to (trainer) Jason (Servis) because you know when you ride one of his horses they’re always ready to fire.”
JASON SERVIS (trainer of World of Trouble, winner) – "He's a runner, man. I've got a mare I can't wait to breed to him. Turf, dirt, mud, everything it doesn't matter to him. Mr. [Michael] Dubb says his speed numbers are better on turf. Next? Maybe the Jaipur (GI) [Six furlongs on turf at Belmont June 8] or maybe the Vanderbilt (GI) [Six furlongs on dirt at Saratoga July 27]"
JOEL ROSARIO (rider of Smart Remark, runner-up) – “He was coming in the end, but the favorite got away. He (World of Trouble) was probably much the best today. But my horse held on for second and gave a great effort. He gave me a strong run in the stretch. I rode him before, and he’s an honest horse. He’s always trying.”
JAVIER CASTELLANO (rider of Chaos Theory, third) – "He likes to come from behind and I don't think you can change that style. He ran huge. He came running. I saved all the ground and did the right thing by the horse. I wish I could have got second place, but I'm not disappointed at all. He ran good."
BRENDAN WALSH (trainer of Chaos Theory, third) – "I thought he ran well. He ran his race, just as we predicted. It would have been nice to be second. I'm happy with him." 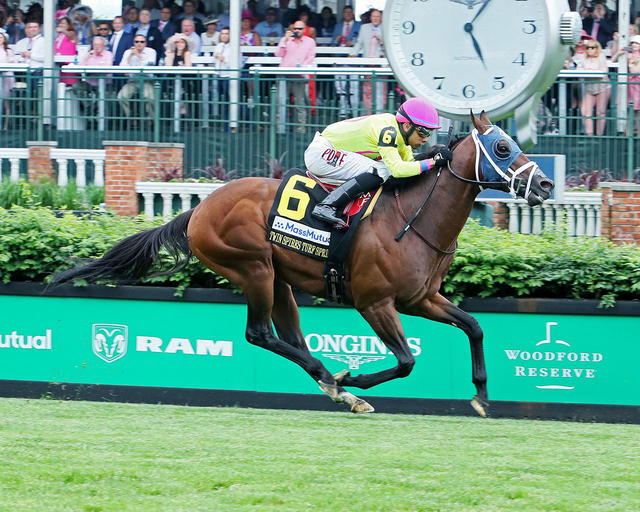