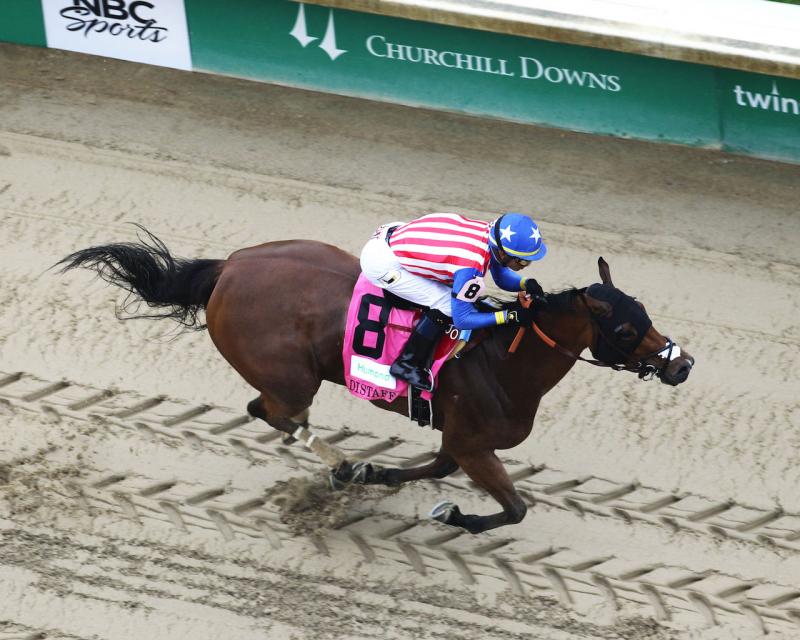 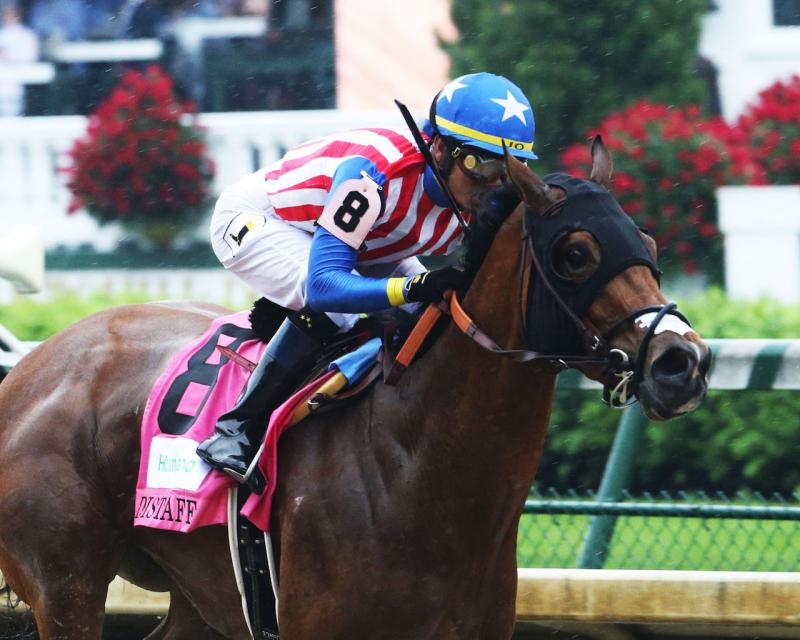 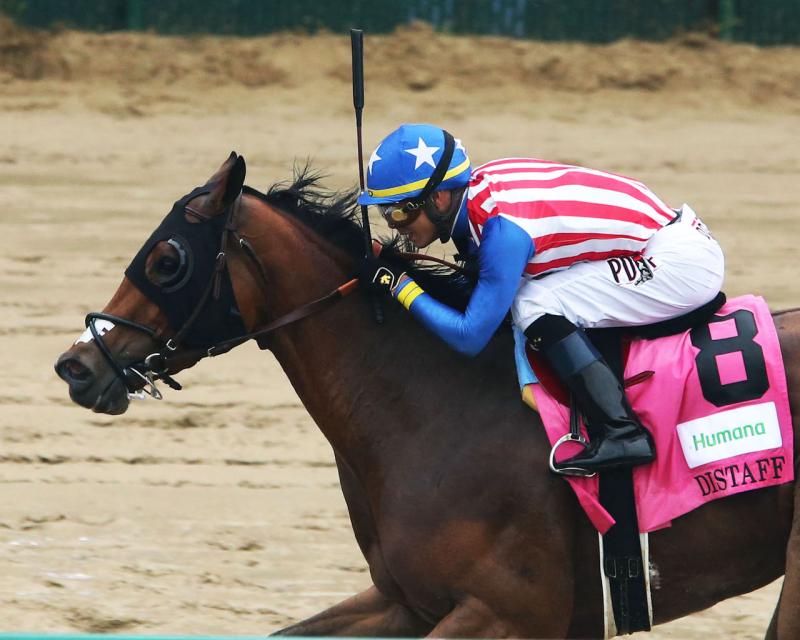 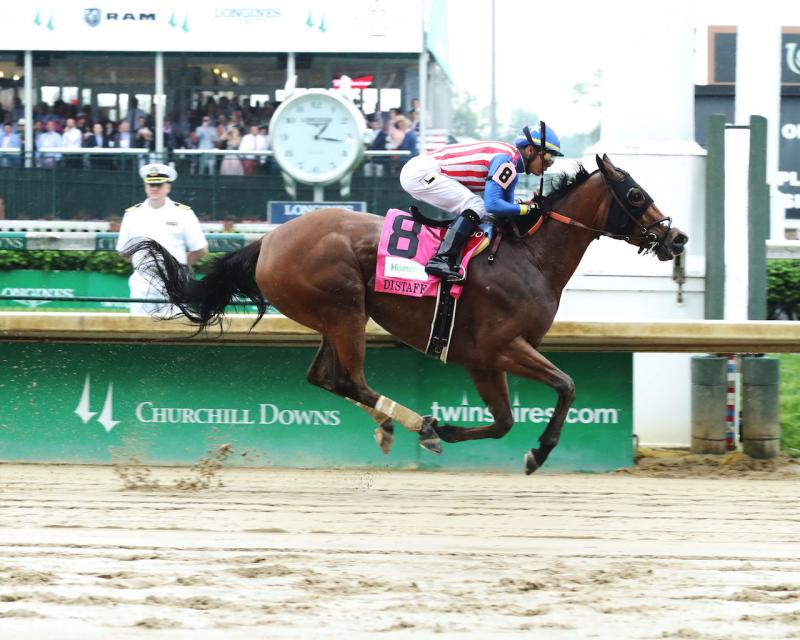 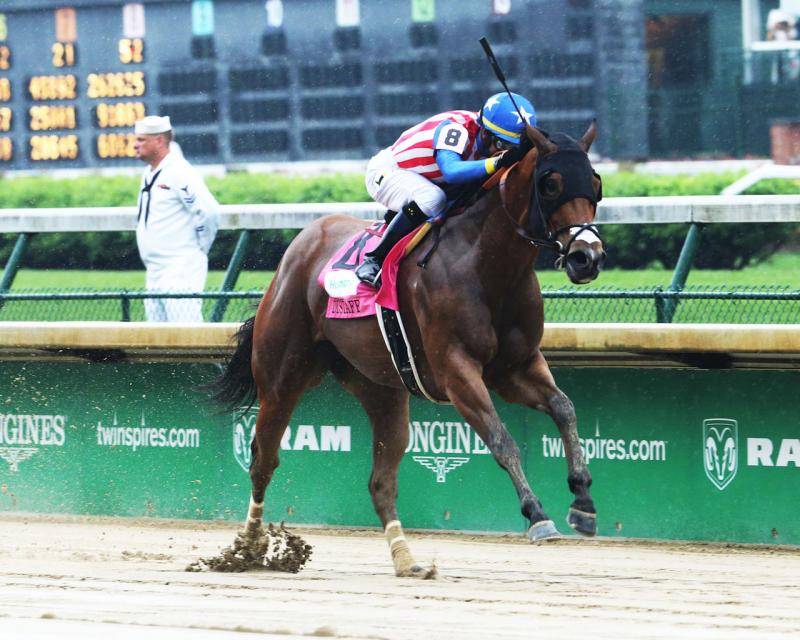 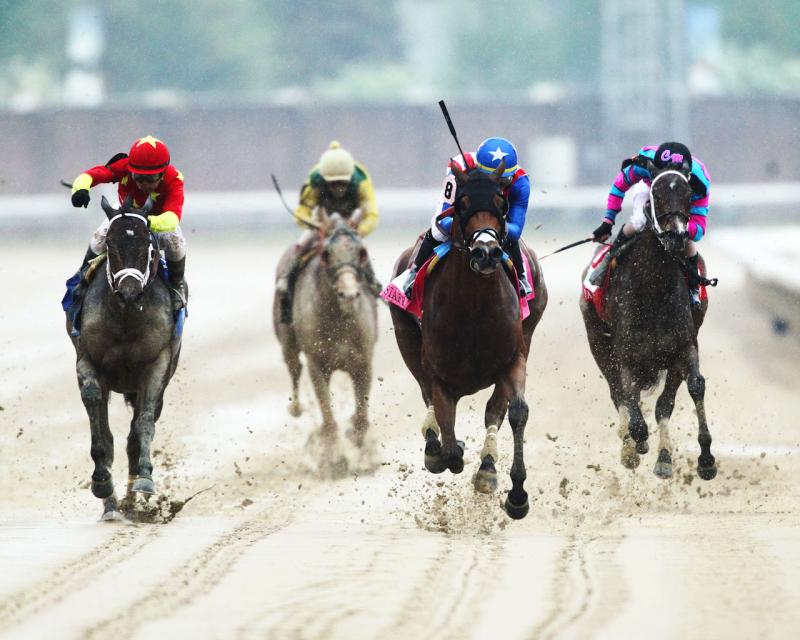 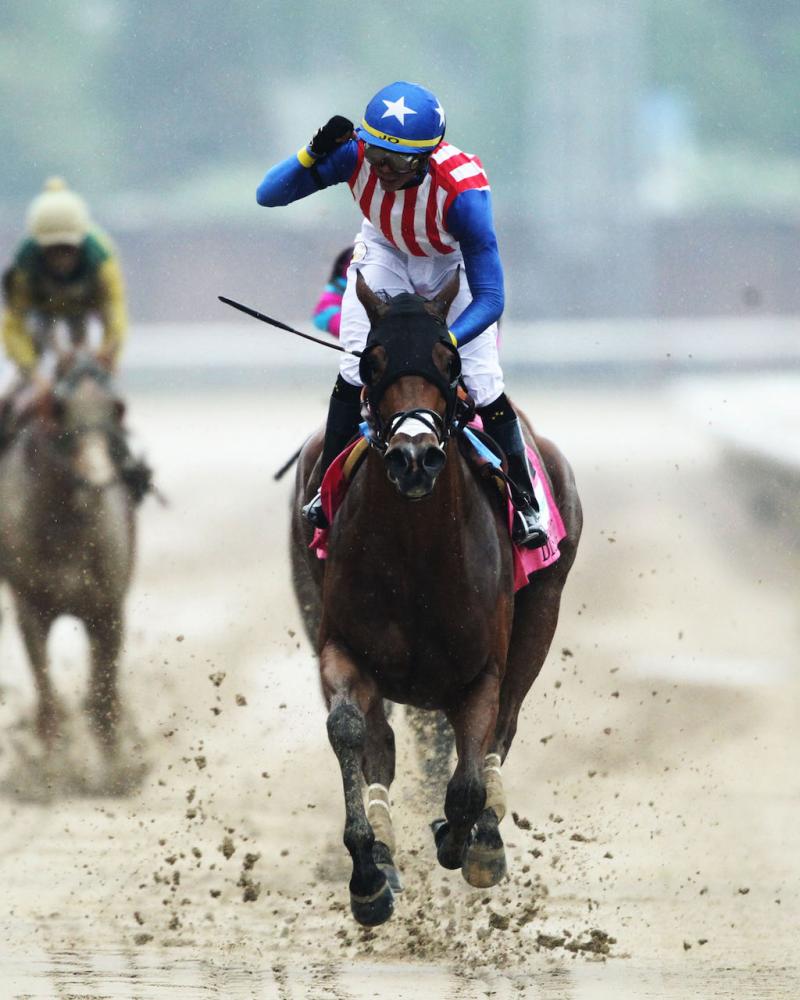 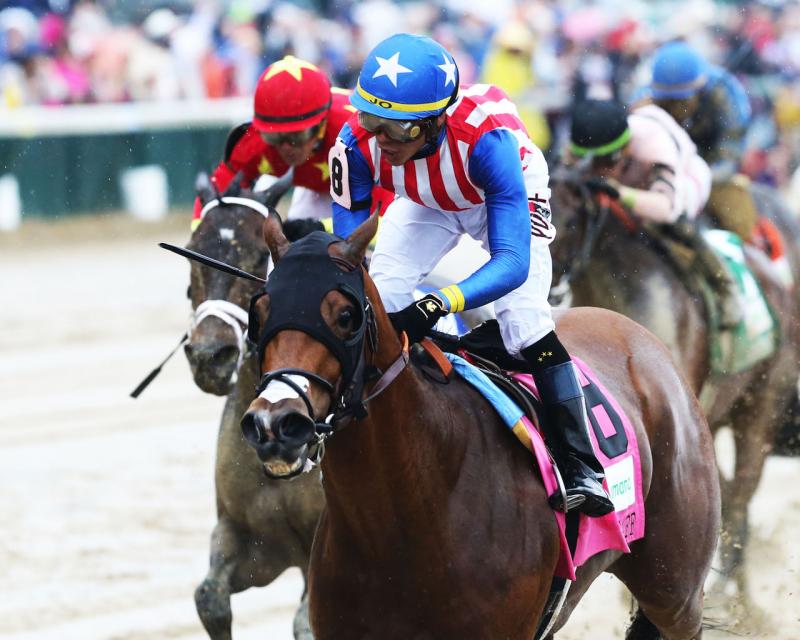 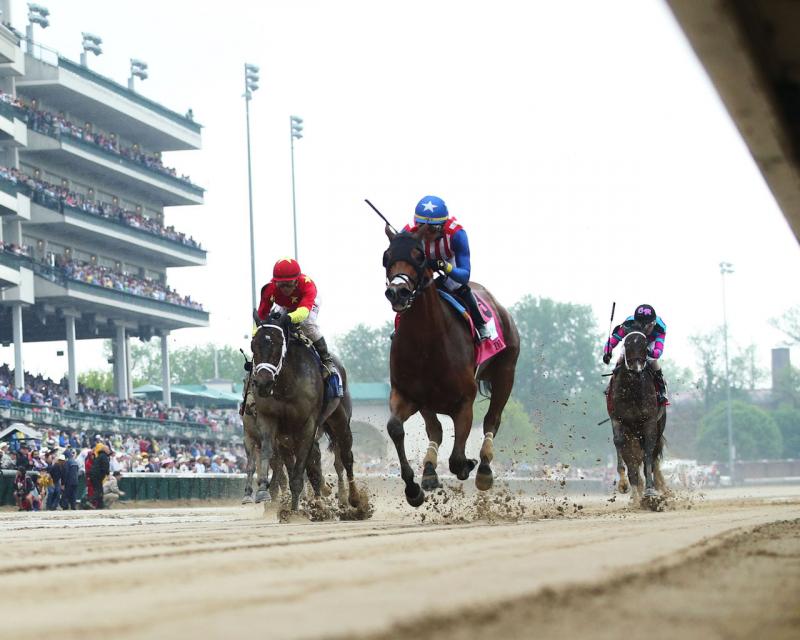 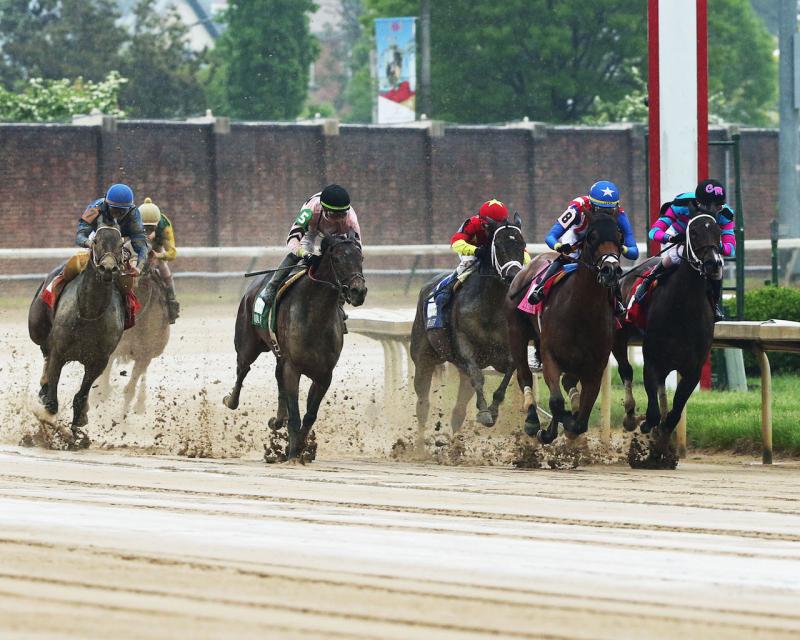 LOUISVILLE, Ky. (Saturday, May 5, 2018) – Kaleem Shah’s American Gal moved past Finley’sluckycharm on the turn and drew clear to win the 32nd running of the $300,000 Humana Distaff (Grade I) for fillies and mares by two lengths over Ivy Bell in the first of seven graded stakes on the Kentucky Derby card.

Trained by Simon Callaghan and ridden by Jose Ortiz, American Gal covered the seven furlongs on a muddy main track in 1:22.33.

Finloey’sluckycharm, who was six-for-six at Churchill Downs entering the race, shot to the lead with American Gal in closest pursuit while posting fractions of :23.03 and :45.63.

On the turn, American Gal took command and entering the stretch repelled an initial bid from Lewis Bay and drew clear with more than enough left to stave off Ivy Bell.

American Gal is a 4-year-old Kentucky-bred daughter of Concord Point out of the Ghostzapper mare American Story.

Finley’sluckycharm finished another half-length back in fourth and was followed in order by Torrent, Skye Diamonds and Miner’s Cat.

Jose Ortiz (rider of American Gal, winner) – “She broke a little bit to the outside, but she is very quick, she recovered very well. And I just sit there in the sixth, fifth path. I didn’t want anybody putting pressure on me early on the outside, so I stayed as wide as I could on the backside. And then we passed the three-eighths pole, going to the quarter pole I tried to engage Finley’sluckycharm, but I think last time (in the Madison [GI]) he (jockey Brian Hernandez Jr.) was outside putting pressure on me, and today I was outside putting pressure on him and that was the difference from last time to this time. And it worked out for him last time and it worked out for me this time.”

“The post position. I had nobody on the outside of me putting pressure, and she was coming from a layoff last time. Today with a race under her belt, way much better today. (Trainer) Simon (Callaghan) did a tremendous job with her. I’m very pleased with how she ran today, the way she took me all the way. She was taking me there, I mean I wasn’t asking for nothing on the backside and she was taking me there, pulling me there hard. I was trying to sit second but she was taking me, and I think it was a tremendous job by Simon. I appreciate the opportunity, and I was just the passenger.”

Simon Callaghan (trainer of American Gal, winner) – “When you’re on the outside you have more options and she got the most comfortable trip and she’s a very good filly. We were concerned because she’s never really run on an off track before but she’s just got such a good disposition, such a talented filly, she can go in anything. We’ve definitely seen a good progression out of the last race. She was on the outside today and last time we got a pretty tough trip with a lot of horses on her outside. This time we were on the outside so just a much better trip. “

Javier Castellano (rider of Ivy Bell, runner-up) – “I thought I had a really good trip. I knew the leaders would go fast early but I thought the pace would be a little faster. My horse tried very hard and I think if the horses up front would have gone a little faster we would have been a little closer at the end. It was a good race.”

Irad Ortiz Jr. (rider of Lewis Bay, third-place finisher) – “She broke too slow; it put me at a disadvantage. I wanted to save with her but I couldn’t. I don’t think she liked this track either.” 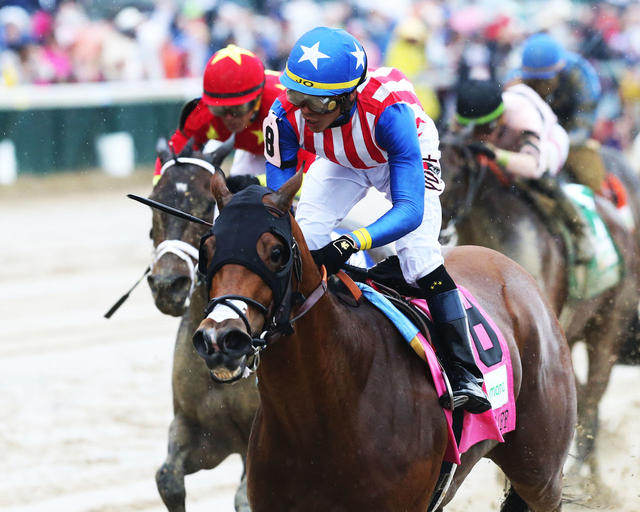