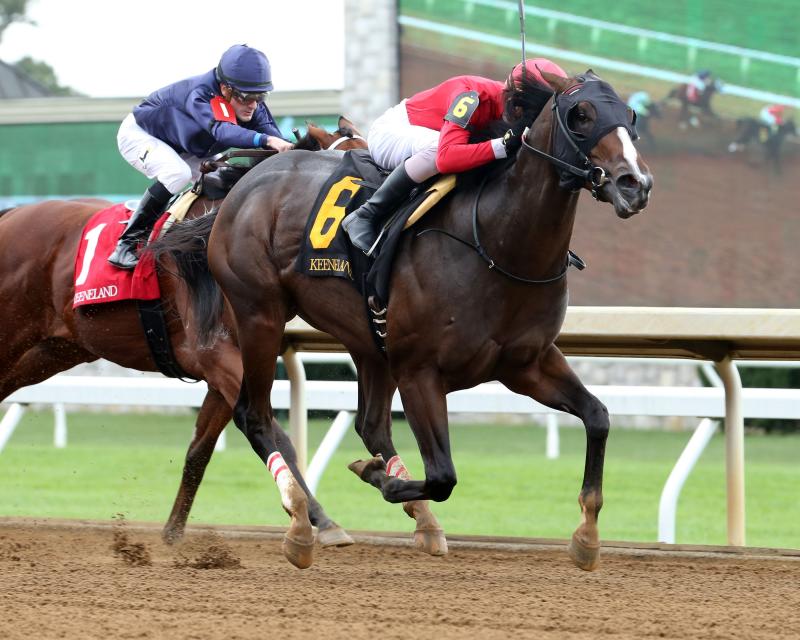 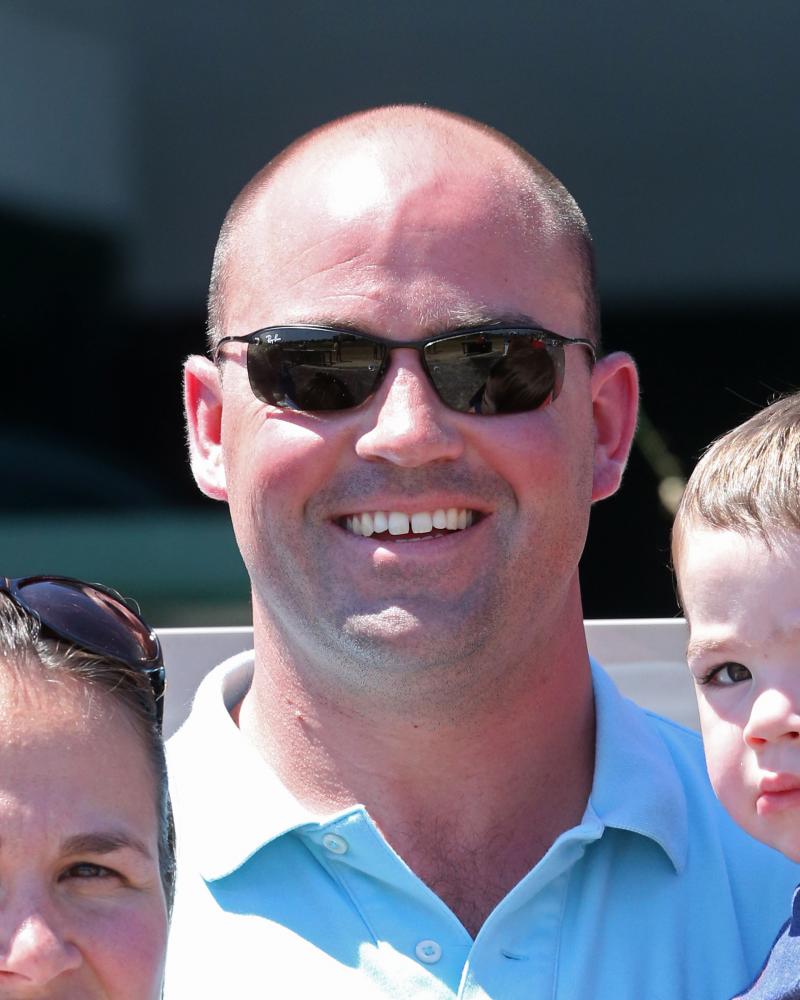 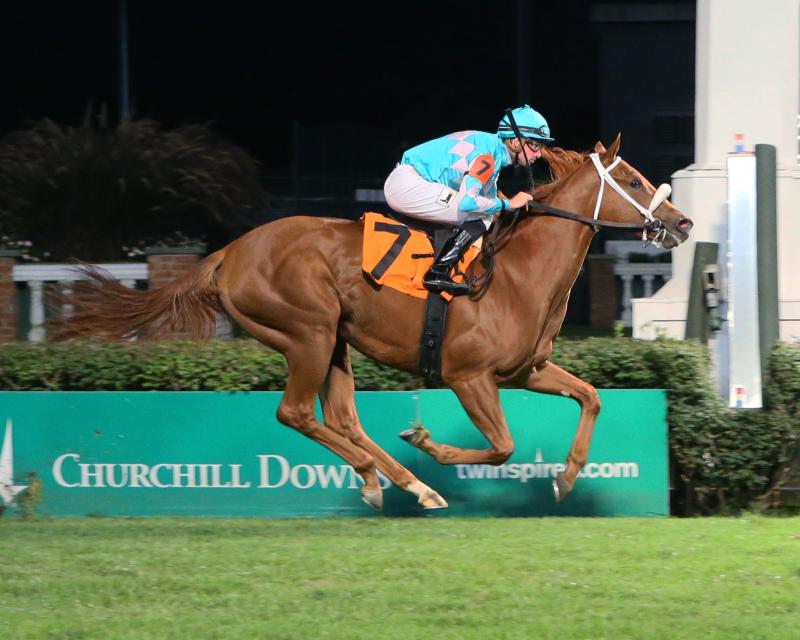 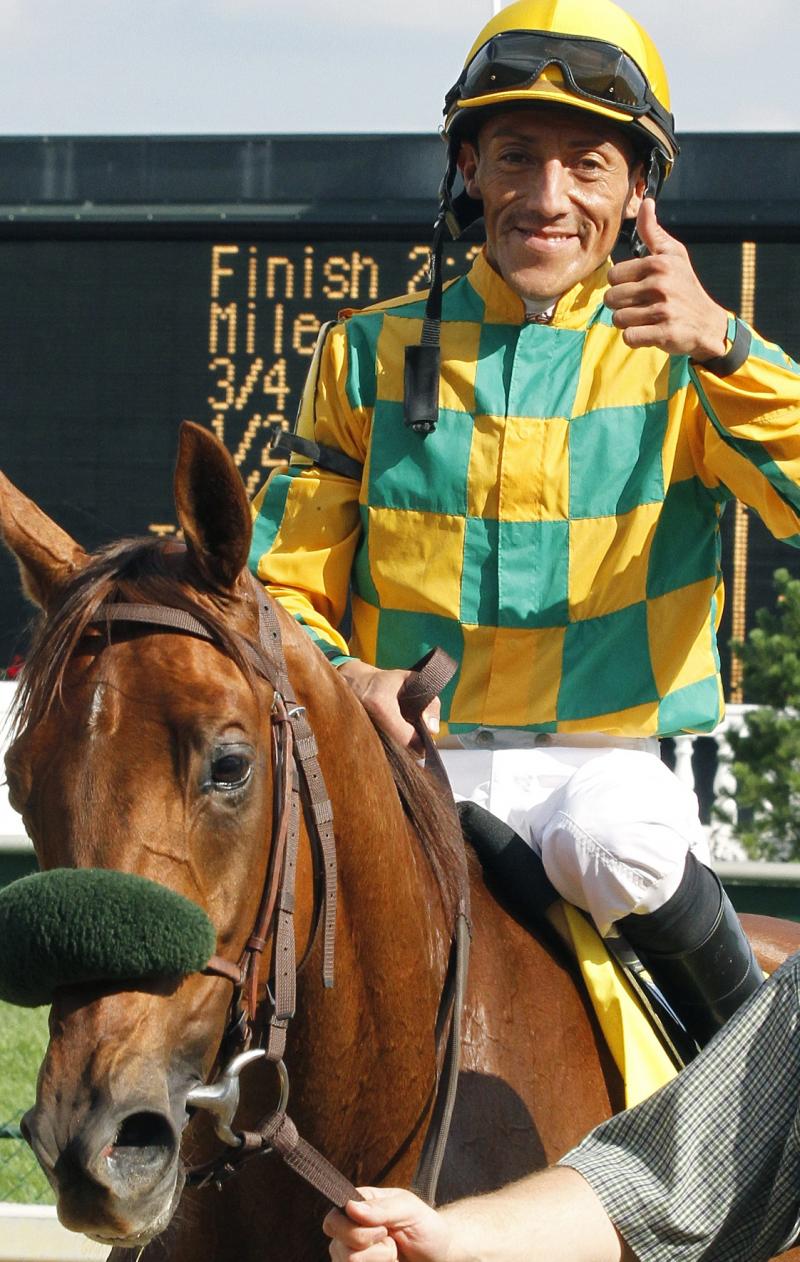 Jockey Francisco Torres is scheduled to ride at Churchill Downs in Sunday's Fall Meet opener - his first visit to the Louisville track since he suffered a neck injury that sidelined him for nearly seven months. (Churchill Downs)

Rigney Racing’s Rubus will test stakes company for the first time in the $80,000-added Street Sense Overnight Stakes, one of four stakes races on Sunday’s opening day “Stars of Tomorrow I” card at Churchill Downs.

“He ran so well in his maiden race at Keeneland that we thought about taking him to the Breeders’ Cup,” trainer Phil Bauer said. “He had a very minor setback and we didn’t want to chance shipping him to California so we spotted him at home in the Street Sense.”

Rubus was a 1 ¾-length winner on Oct. 7 at Keeneland in a maiden special weight with Joe Rocco Jr. aboard. The 2-year-old colt by Majestic Warrior traveled six furlongs in 1:10.53 after pressing the pace for most of the race and drawing clear in the final sixteenth of a mile.

“I thought the race was pretty solid overall,” Bauer said. “I think the track changed throughout the day and he comes into this race with one of the highest speed figures in the field.”

“Mr. Rigney devotes so much to this industry,” Bauer said. “He loves this game and his horses. Fingers crossed we can get Rubus home Sunday.”

Rubus, a $260,000 purchase at the 2017 OBS April Sale, is the fifth foal to make it to the racetrack from the multiple-stakes-winning sprinter Country Diva.

“I think the one-turn mile distance should fit him perfectly with his pedigree,” Bauer said.

“He’s really been training well the last couple of weeks at Churchill Downs,” assistant trainer Jeff Hiles said. “He’s run well so far in his 2-year-old campaign and we’re really looking forward to his 3-year-old year. He should be tough in this race Sunday. We breezed him Monday in company with a couple of other nice 2-year-olds and he looked good.”

John Tippmann was most recently fifth in Keeneland’s Bourbon Stakes (Grade III), a race that was taken off the turf and run at 1 1/16 miles over a sloppy surface.

The seven-furlong Spendthrift Juvenile Stallion Stakes, carded as Race 7 on Churchill Downs’ “Stars of Tomorrow I” card, has a scheduled post time of 4 p.m. (all times Eastern). The 11-race card also includes the $80,000 Street Sense Overnight Stakes and $80,000 Rags to Riches Overnight Stakes. The first race is 1 p.m.

John Tippmann was bred in Kentucky by co-owner Baldassari.

The 2-year-old colt by Tiz Wonderful was bred in Kentucky by his co-owner Baldassari. After breaking his maiden on Aug. 11 at Ellis Park under Robby Albarado, John Tippmann was the runner-up in Kentucky Downs’ $350,000 Juvenile Stakes.

“He’s a big, good looking horse,” Hiles said. “He trains well on the dirt but I think he could run on either surface. Eventually I think he will excel at two turns even though he was beaten in the Bourbon going a route of ground you have to be lenient on the race because of the off surface.”

The seven-furlong contest, carded as Race 9, has a scheduled post time of 5 p.m.

Monomoy Girl is undefeated in two starts over the turf for trainer Brad Cox. The 2-year-old filly by Tapizar rallied from off the pace in her Sept. 5 debut at Indiana Grand, then recorded a wire-to-wire victory at Churchill Downs on Sept. 28 in a first-level allowance race. A $100,000 purchase at the 2016 Keeneland September Yearling Sale, Monomoy Girl will switch surfaces to the dirt and break from post position 6 with jockey Florent Geroux aboard.

Gutsy maiden-winner She’s Pretty Lucky, a 2-year-old daughter by Lookin At Lucky, is listed as the 4-1 co-second choice on the morning line following a 23-1 upset in her career debut over seven furlongs at Churchill Downs on Sept. 30 for trainer Eddie Kenneally. The Texas-bred filly will break from post position 2 with Joe Rocco Jr. getting the return call.

TORRES SET TO RETURN TO THE SADDLE SUNDAY AT CHURCHILL DOWNS – Jockey Francisco Torres is set to return to Churchill Downs on Sunday for the first time since he suffered a neck injury that left him sidelined for nearly seven months.

“We’re really excited to get back to Churchill,” agent Derek Ducoing said. “He’s been rehabbing for a while now and got clearance two weeks ago to get back in the saddle. We rode a few horses at Indiana Grand last week and won two races.”

Torres, 49, underwent successful surgery on March 30 to repair a fractured C-6 vertebra and tailbone following a spill at Fair Grounds. This was Torres’ fourth broken neck in his 28-year career as a jockey.

“We have been chomping at the bit to get clearance back from the doctors but didn’t want to rush things,” Ducoing said. “We’ll be at Churchill for the beginning of the meet and ship to Fair Grounds for their meet in a couple weeks. ‘Cisco’ feels great and I think we’ll be setup for a big close of 2017.”

Torres is named to ride two horses Sunday: Soul Beem (Race 6) and Just Be Frank (Race 7). The Mexico-native has 3,191 victories in his career, including 254 wins at Churchill Downs.

Kristufek will represent TwinSpires.com on the Breeders’ Cup World Feed simulcast and is scheduled to return to Churchill Downs on Wednesday, Nov. 8.

ROMANS VS. MOTT – Dale Romans, a 51-year-old native of South Louisville, is just one win away from joining Hall of Famer Bill Mott as the all-time leading trainer in races won at Churchill Downs – a record that 64-year-old Mott has held for 31 years. Mott has 701 wins at Churchill Downs, while Romans begins the meet with 700 wins after landing just one victory with a pair of seconds and a trio of thirds from 24 starters during the 11-day September Meet (Mott went 0-for-6).

MILESTONE WATCH – Along with the heated-battle between Dale Romans and Bill Mott for the all-time leading trainer honors at Churchill Downs (701-700 wins), trainer Greg Foley (398) is two wins away from 400 career-victories beneath the historic Twin Spires while trainer Ian Wilkes is targeting 200 career victories at Churchill Downs (194 wins).

TRICK-OR-TREAT-AT-THE-TRACK OFFERS SAFE HALLOWEEN FUN AT SUNDAY’S FAMILY ADVENTURE DAY – Break out your Halloween costume and bring the kids to Family Adventure Day presented by Kroger for safe trick-or-treating, fun family activities and racing. Churchill Downs and our community partners will pass out more than a ton (2,244 pounds) of candy at 17 booths throughout the first floor of the racetrack between 2 p.m. and 5 p.m. Kids are encouraged but not required to wear costumes. Parents may wear costumes but masks on adults are prohibited for safety reasons.

Tickets are available for $8 in advance at www.churchilldowns.com/tickets

LANERIE, MAKER, RAMSEY’S SET TO DEFEND TITLES IN FALL MEET – Jockey Corey Lanerie, trainer Mike Maker and owners Ken and Sarah Ramsey will defend their Fall Meet titles. Lanerie, who rode 31 winners at the 2016 Fall Meet, is seeking to land his 15th riding title at the last 17 meets at Churchill Downs. The native of Lafayette, La. landed his 14th local title with a record 19 wins over last month’s 11-day September Meet. Maker, who won 16 races a year ago for his sixth local title, is celebrating the 10th anniversary of his record-setting 2008 Fall Meet when he won an unprecedented 31 races over 26 days. His primary owners, the Ramseys, secured their 29th title for top owners at Churchill Downs during the September Meet when their red-and-white silks were carried into the G.H. MUMM’s Winner’s Circle five times. Last fall, the Nicholasville, Ky. couple won six Fall Meet races. Overall, they’ve won 474 races at Churchill Downs, which is more than twice as much as their nearest competitor, the famed Overbrook Farm’s 206.

DOWN THE STRETCH – The podcast of “Inside Churchill Downs”, which airs Fridays at 6 p.m. on ESPN 680/105.7, is available on the stations website www.espnlouisville.com. Friday’s one-hour show, co-hosted by Churchill Downs Racetrack’s John Asher, Darren Rogers and Kevin Kerstein, featured analysis and previews by “Daily Racing Form” and NBC Sports’ Jay Privman, Private Clocker Gary Young, and trainer Dallas Stewart. There will no show on Friday, Nov. 3 because of the Breeders’ Cup. … Churchill Downs will simulcast the Breeders’ Cup World Championships from Southern California’s Del Mar on Friday, Nov. 3 and Saturday, Nov. 4. Churchill Downs will run 10 races those days beginning at 2 p.m. and 2:15 p.m., respectively. A simulcast of the 10-race Championship Friday card from Del Mar will begin at 2:25 p.m. and the Breeders’ Cup will cover Races 6-9 (5:25-7:35 p.m.). Championship Saturday’s 12-race program at Del Mar will commence at 1:10 p.m., cover Races 4-12 (Breeders’ Cup starts at 3 p.m.) and culminate with the Grade I, $6 million Breeders’ Cup Classic at 8:35 p.m. The first 5,000 fans in attendance on Saturday, Nov. 4 for a simulcast of the Breeders’ Cup receive a free 2018 Churchill Downs Wall Calendar, presented by Humana. … The 50/50 charitable gaming raffle is back for the Fall Meet. Proceeds from the raffle will go towards charitable organizations that benefit from the Churchill Downs Incorporated Foundation, a 501(c)(3) nonprofit corporation that helps support the critical work of nonprofits in our industry, make a difference in important public health programs and provide meaningful opportunities in art and education. Visit www.derbygives.com to purchase tickets and for more information. … For more information about Churchill Downs’ Fall Meet visit: https://www.churchilldowns.com/racing-wagering/news/40-things-to-know-about-churchill-downs-fall-meet. 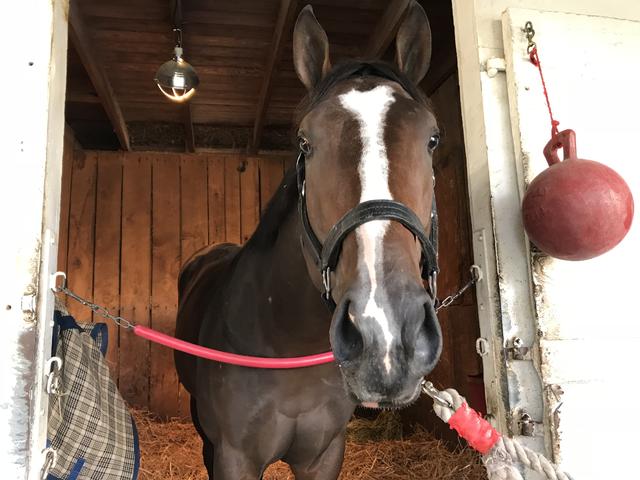