May 3, 2019
| Churchill Downs Communications
LOUISVILLE, KY (Friday, May 3, 2019) – Klein Racing’s Break Even shot to the front out of the gate and never was threatened in romping to a 5 ½-length victory over Bell’s the One in the 64th running of the $250,000 Eight Belles (GII) Presented by Derby City Gaming for 3-year-old fillies, the first of six graded stakes on Kentucky Oaks Day.
Trained by Brad Cox and ridden by Shaun Bridgmohan, Break Even covered the seven furlongs on a muddy track in 1:22.13. For Cox, it was his second victory in the race having scored with Benner Island in 2017.
It was Bridgmohan’s 700th-career Churchill Downs victory and second in the Eight Belles having won with Four Gifts in 2009.
In winning her first graded stake, Break Even quickly opened a daylight advantage and led the field of nine through fractions of :22.08 and :44.14. No one came close to the Klein homebred through the stretch.
The victory was worth $148,800 and increased her earnings to $287,400 with her fourth consecutive triumph. Break Even is a Kentucky-bred daughter of Klein’s stallion Country Day out of the Saint Ballado mare Exotic Wager.
Sent off as the favorite, Break Even returned $6.40, $4.40 and $3.40. Bell’s the One, ridden by Corey Lanerie, returned $16.60 and $8.40 and finished 1 ½ lengths in front of Queen of Beas, who paid $4.20 to show under Jose Ortiz.
It was another head back to Proud Emma, who was followed in order by Bizwhacks, Mother Mother, Del Mar May, Lyrical Lady and Take Charge Angel.
EIGHT BELLES QUOTES
SHAUN BRIDGMOHAN (rider of Break Even, winner) – “She’s a very special filly and thanks to (owner) Richard (Klein) for putting me back on her coming off an injury. He believed in me and I believed in the filly and she is pretty special. Today was a real question for her. Everything she’s done so far has been so easy on her and today I (tapped) her a couple of times and once I did she really responded well.”
Brad Cox (trainer of Break Even, winner) – “No (didn’t expect her on the lead that easy). She’s so fast out of the gate, she’s just a natural. I don’t think you can teach that. For her to get away and go :44, I saw that and was like ‘wow’ but then I looked back and I saw the other horses starting to knuckle down and Shaun still has a hold of her. We thought there was a little bit of a question mark going seven-eighths, but when you’re in front by two or three (lengths) and you’re into the bridle, you wouldn’t trade spot with anybody. I didn’t really like seeing :44 but it was the way she was doing it.
BRAD COX (trainer of Break Even, winner) – “This filly is very fast. And I think the most impressive thing about her is how laid back she is. A lot of times horses that go that fast are horses that tend to be keyed up and want to over train in the mornings. Not this filly. She just gallops around each morning nice and easy with her ears up. It’s almost like Monomoy Girl to some degree, she was like back like that. Same thing with this filly. For such a lightly raced filly she’s very mature.”
(What’s next? Acorn?) “Yeah, I was already thinking today we’re going to find out if we need to look at the Acorn or the Prioress. It’s something we can look at. It’s something we’re going to nominate to for sure.”
COREY LANERIE (rider of Bell’s the One, runner-up) – “The winner is just a super nice filly. My filly is really good herself. After that bad race at Keeneland (in the Ashland), we were excited for what she showed today. This race was not easy. She did everything we asked her to do and thought for a minute we could win it.”
JOSE ORTIZ (rider of Queen of Beas, third) – “She broke a bit slow and I saved ground the first part of the turn. The second part of the turn I had to go out and should have stayed in and followed (Bell’s the One). She was a longshot and I didn’t want to get stuck. (Queen of Beas) ran very good.” 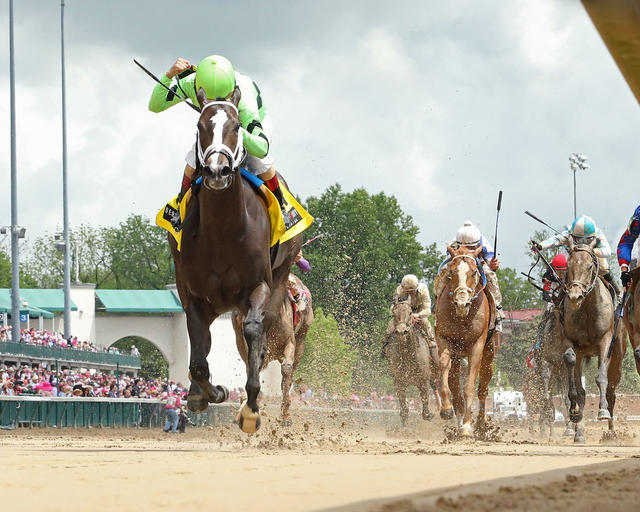