On a blustery Monday morning beneath the historic Twin Spires, Breeders’ Cup Classic (Grade I) hopeful Yoshida (JPN) worked five furlongs in 1:00.80 in preparation for the 1 ¼-mile race on Nov. 3 at Churchill Downs.

Yoshida, the two-length winner of the Woodward Stakes (GI) on Sept. 1 at Saratoga, began his work at the five-furlong pole in company with 2017 Kentucky Downs maiden special weight winner Morocco through eighth-mile splits of :13.20, :25.60, :37 and :49 prior to galloping out six furlongs in 1:14 and seven furlongs in 1:28, according to Churchill Downs’ clocker John Nichols. Morocco completed his breeze after a half-mile in :50.

“He’s just doing great,” Hall of Fame trainer Bill Mott said. “We’ve been really happy with him since we got to Churchill last Thursday. Even though he’s a Grade I winner on the grass (in the May 5 Old Forester Turf Classic), we thought the Classic is the best route.”

“We’re just very fortunate to be in the spot we are,” WinStar Farm’s President and Racing Manager Elliott Walden said. “It was a great work this morning. We were all so thrilled on Derby Day to get his first Grade I win in the Old Forester and then return over the summer to win the Woodward on the dirt was very special as well.”

Mott has won the Breeders’ Cup Classic twice before with Cigar (1995) and WinStar Farm’s Drosselmeyer (2011).

“I think going into this year’s Classic Yoshida has a better chance than Drosselmeyer did,” Walden said.

In the barn adjacent to Mott on the Churchill Downs backstretch is fellow Breeders’ Cup Classic contender Mind Your Biscuits, who was pre-entered to run in the Classic as his first option but could also pre-enter in either the Dirt Mile or the Sprint as a second option, according to trainer Chad Summers.

Pre-entries for all 14 Breeders’ Cup races were due at noon (all times Eastern) Monday. The pre-entry announcement will take place on Wednesday at 11:30 a.m.

The stream of the pre-entry announcement, which will be hosted by Caton Bredar and Churchill Downs’ Joe Kristufek will be available on the Breeders’ Cup website, Official Mobile App and Facebook page.

Training hours at Churchill Downs will remain 5:30-10 a.m. daily until Saturday when the track will open at 5:15 a.m. There will be turf training available Tuesday from 9:45-10 a.m. and daily beginning Sunday, Oct. 28. For more information, visit: https://bit.ly/2PeXuHY.

DOWN THE STRETCH – Imperial Hint, one of the likely favorites for the TwinSpires Sprint (GI), left Parx Racing in Bensalem, Pa., around 6:30 a.m. Monday and is expected to arrive in Louisville around 6 p.m., according to trainer Luis Carvajal Jr. 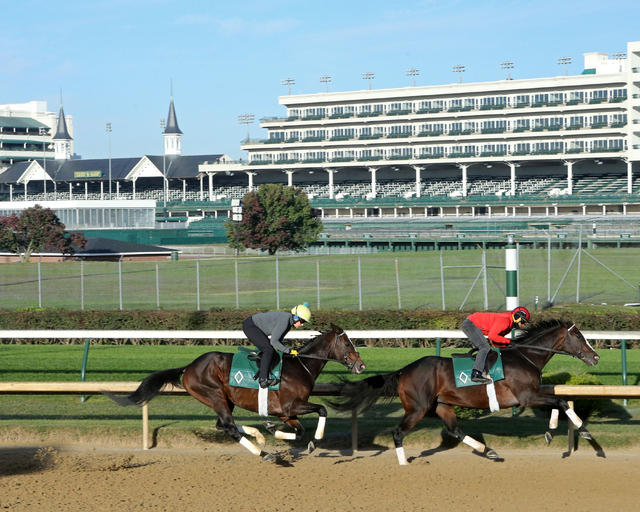