Button Down Gets First Graded Stakes Win in $100,000 Cardinal Handicap 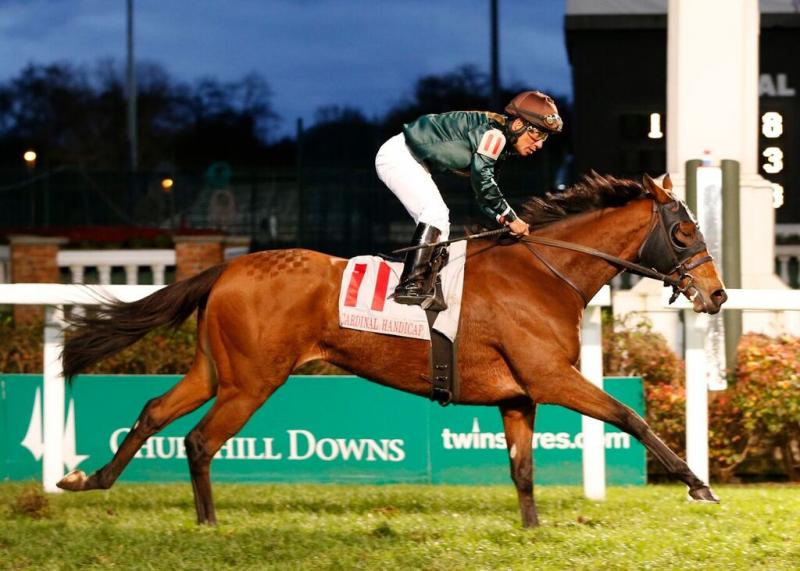 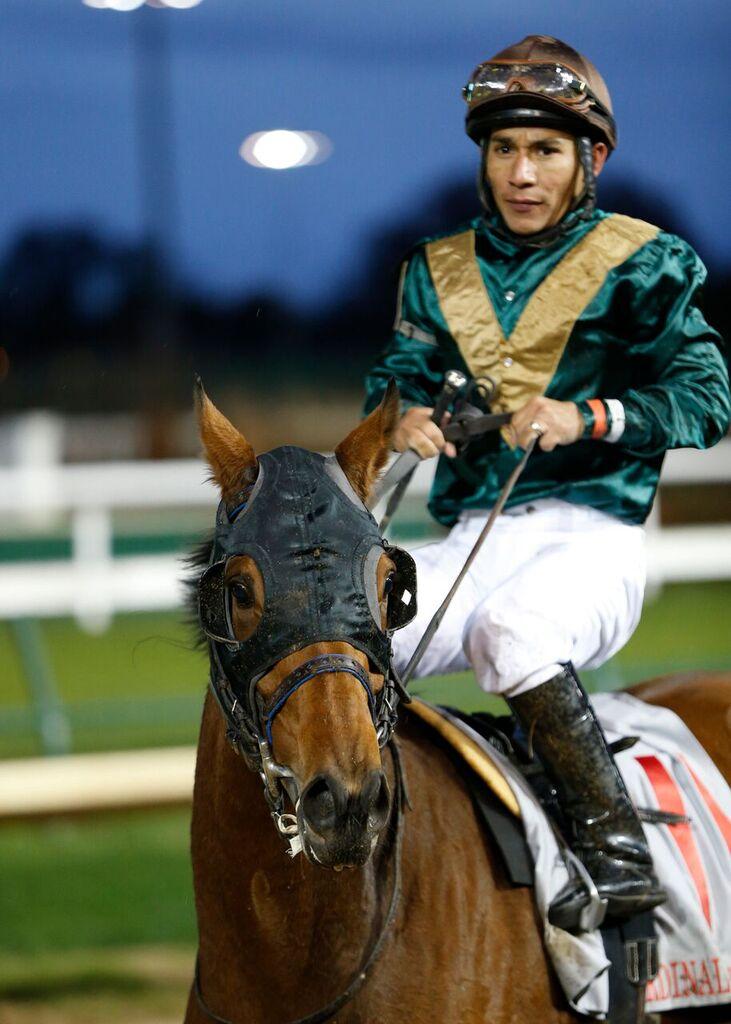 Jockey Paco Lopez returned to the winner's circle aboard Button Down (GB) following the 4-year-old filly's victory in the $100,000 Cardinal (Grade III).  The win was Lopez's second graded stakes triumph in a week at Churchill Downs. (Reed Palmer, Churchill Downs) 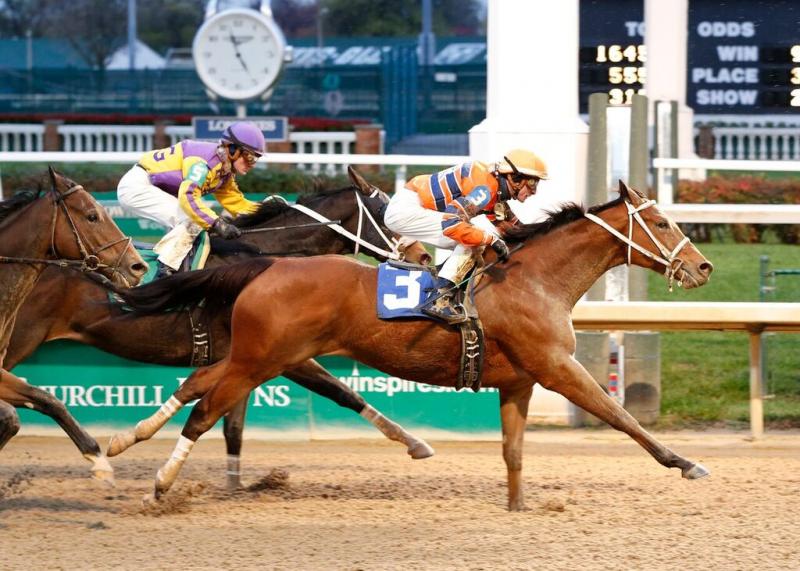 Canadian invader Button Down (GB) found the chilly and rainy conditions on Saturday afternoon at Churchill Downs to her liking as the 4-year-old filly swept past the leaders at the top of the stretch and held sway in the final stages to beat Lady Fog Horn by a half-length in the 42nd running of the $100,000 Cardinal Handicap (Grade III) for fillies and mares.

“She has just been an amazing filly” Carroll said. “Every time she goes over there, she comes back better.”

Invading Humor led the field of 11 fillies and mares through early fractions of :24.02, :48.85 and 1:14.94 with Button Down (GB) well placed early a couple of lengths off the lead. Button Down (GB) was fanned wide on the final turn, took command entering the homestretch and opened a clear advantage in the stretch before holding off Lady Fog Horn. Lacy (GER) rallied from far back but was another 3 ¼ lengths behind the runner-up to get third.

“This filly is a really good filly,” Lopez said. “We had a little trouble in the first turn. In the second quarter we got in a good position and then she was so relaxed turning for home. This filly tries really hard.”

Prior to the Cardinal, Button Down (GB) was fifth in the Grade I E.P. Taylor over her home course at Woodbine.

“The plan is to keep on racing her next year,” said Carroll, who added that Button Down (GB) would be turned out at the owners’ farm in Paris, Ky. for five to six weeks. “She ran in Europe (at age 2 and 3), she flew over (to the United State) and she ran all season so I would like to see her freshen up and we’ll look at a real strong campaign next year.”

Button Down (GB), a bay daughter of Oasis (GB) out of the Sadler’s Wells mare Modesta (IRE), was bred in England by Juddmonte Farms.

One race earlier, Windy Spa Racing Stable LLC and Bobby Robertson’s Bagg O’Day rallied in the stretch to beat W. B. Smudge by three-quarters of a length in the eighth running of the $82,625 Bet On Sunshine Overnight Stakes. The 4-year-old gelding ran six furlongs on a fast track in 1:09.91 under Joe Rocco Jr. for trainer Steve Hobby. The $49,247 first prize jumped the Kentucky-bred’s earnings to $243,541 from five wins, four seconds and a pair of thirds in 17 starts. He paid $8.80 to win. Alsvid, the 2-1 favorite, was third.

JOSIE CARROLL (via telephone at Woodbine), trainer of BUTTON DOWN (winner): “She has just been an amazing filly. Every time she goes over there, she comes back better.

“I was a little concerned that it was going to be too soft because of the rain that came down. I didn’t really know how deep it was going to get but I did talk to Paco [Lopez] and he said that the course was safe, but soft. We talked about how to ride her and he had a lot of confidence in her. He rode her very well.

“The plan is to keep on racing her next year. What I asked them to do was give her a little bit of a holiday; they have a farm in [Paris] Kentucky so we’ll turn her out for five to six weeks and let her get her head down. She ran in Europe, she flew over and she ran all season so I would like to see her freshen up and we’ll look at a real strong campaign next year.”

PACO LOPEZ jockey of BUTTON DOWN (winner): “We had a good trip. I didn’t want to send her up too close. Last time we won a stakes here [last weekend’s Mrs. Revere with Isabella Sings] and we went up front but not today. This filly is a really good filly. We had a little trouble in the first turn. In the second quarter we got in a good position and then she was so relaxed turning for home. This filly tries really hard.”

ALBIN JIMINEZ, jockey on LADY FOG HORN (runner-up): “My filly tries and she’s a real nice filly but the winner was very strong and she’s a nice filly, too. In the stretch, we couldn’t get the winner but I was confident in my filly and she ran good.”

JOE ROCCO JR., jockey on LACY (GER) (third): “Graham (Motion) said just try to cover her up. They were a little disappointed the first couple of times she ran here. He said no matter where she was, whether she was closer or behind, just conserve early. The Europeans tend to break a little slower and she did and the way the turf worked out she ended up being a little further back than I would have liked, because it’s tougher to make up ground on a soft turf. But that’s where she was comfortable and when she finally got her feet underneath of her and I was able to guide her out onto the harder turf, then she kicked in when she got her footing on the firmer grass.”

GRAHAM MOTION, trainer of LACY (GER) (third) and FAUFILER (eighth): “I was pleased with her (Lacy). I thought she ran on well to get third and kind of got back to her old form, which is encouraging.”

STEVE HOBBY, trainer of BAGG O’DAY (winner): “When they put up the :20 3/5 I thought, ‘Great, we’re in a good spot.’ I was worried we were too far back until they put that up. He and Joe [Rocco Jr.] really get along well and I think Joe makes a difference with this particular horse. The last race [Remington Sprint Cup] was tough and he got buried down on the inside. He really prefers to get worked out when he wants to really turn it on and run. He didn’t get the trip we had liked last time. I was concerned today because there was so much speed that we could get a bad trip being stuck down somewhere but it worked out real well.”

JOE ROCCO JR. jockey of BAGG O’DAY (winner): “He’s a really cool horse and a lot of fun to ride. Shipping out to Remington for him last time was a lot – as it would be for any horse to overcome. That was a tough race with that Ivan Fallunovalot in there. He ran a great race today.”

JULIEN LEPAROUX, jockey of W.B. SMUDGE (second): “We had a good trip, at the quarter pole I got him out and made the first run at it. I thought I was going to get there but we got outrun during the last part of it. It was a big race for him.”

CHRIS HARTMAN, trainer of ALSVID (third as the 2-1 favorite): “He had a hot pace to run at but he just didn’t have no racing room. Things happen, you know? He might have run the best and just got outrun.”

COREY LANERIE, jockey on ALSVID (third as the 2-1 favorite): “Nothing opened. I probably should have stayed on the outside. I just hated to go so wide. When I dropped him in he grabbed the bridle and he started to run with me with nowhere to go. Everything kind of collapsed in front of me and I had nowhere to go for a long time.” 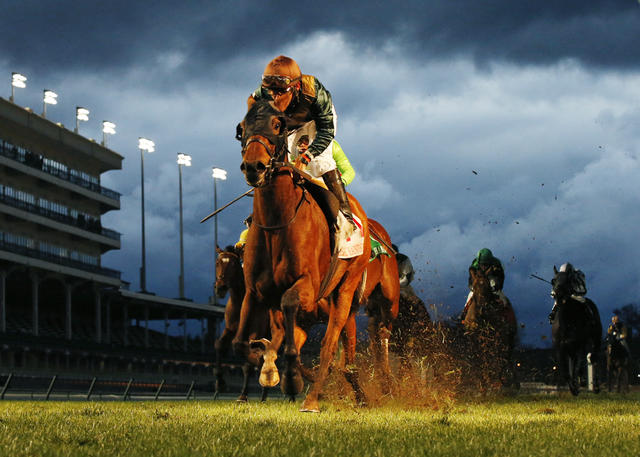