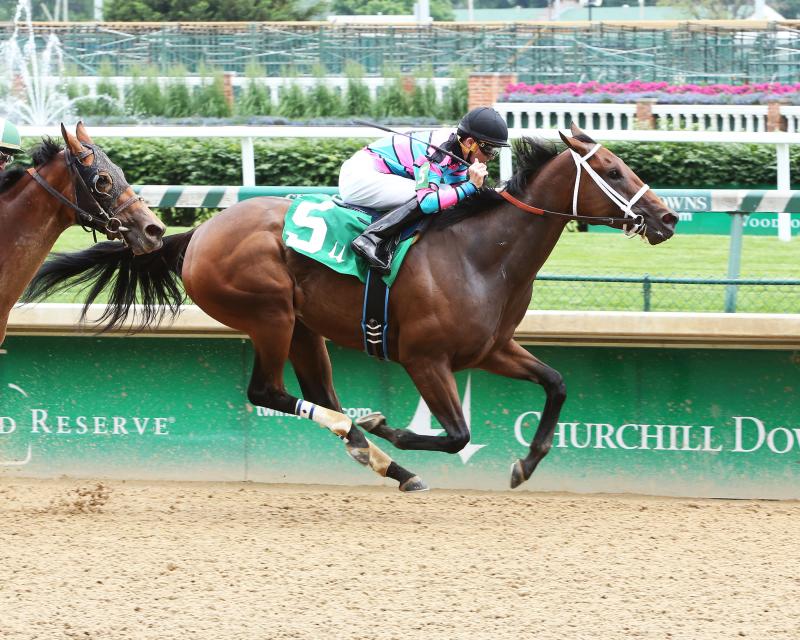 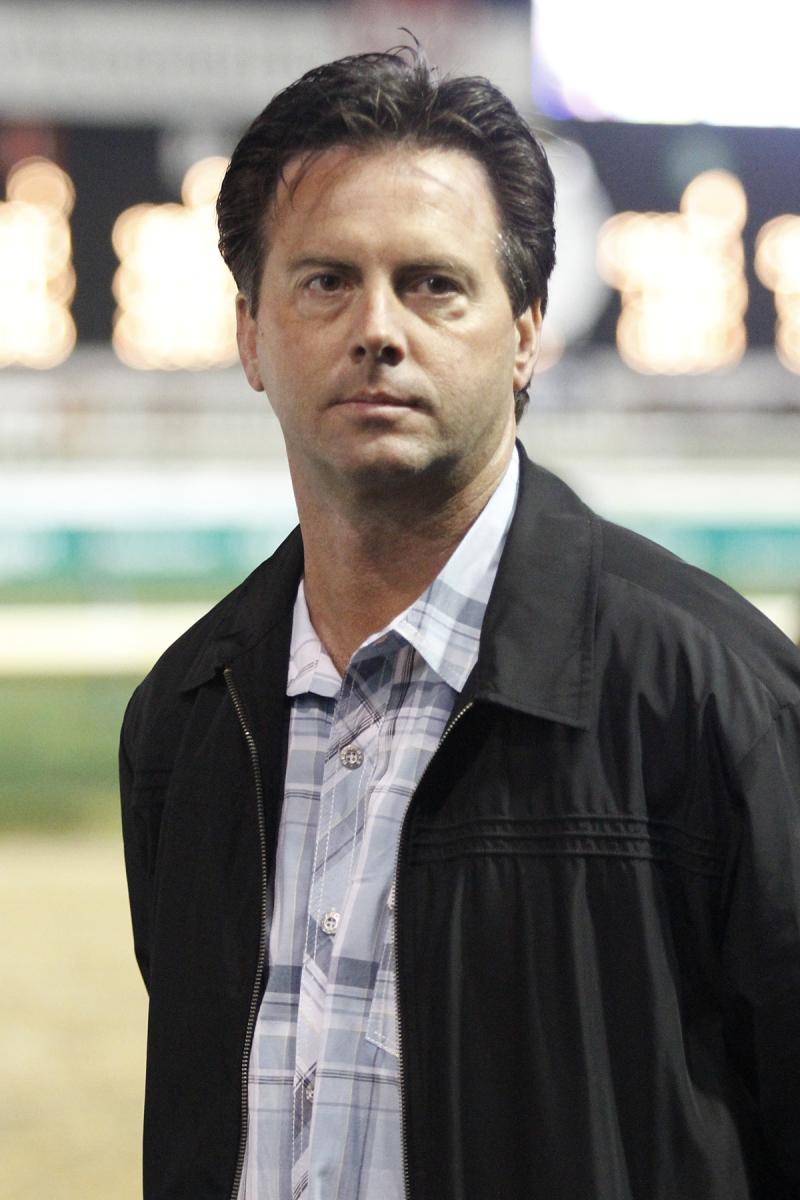 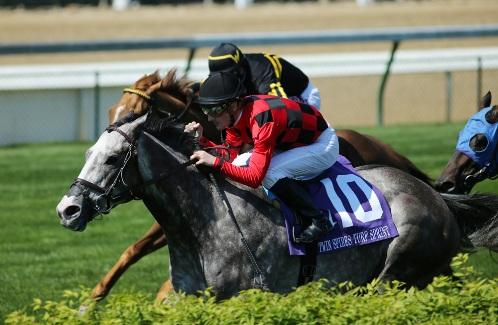 Carl R. Moore Management LLC and Brad Grady’s Mayla will take things up a notch when she faces a field eight rivals in Saturday’s $200,000 Chilukki (Grade II), a one-mile event for fillies and mares on the Churchill Downs main track.

The Maryland-bred daughter of Sharp Humor enters Saturday’s race off a troubled third in a seven-furlong allowance race at Keeneland, where she faced fellow Chilukki entrants Unbridledexplosion and Athena. She kicked off her 4-year-old campaign with a seven-furlong allowance victory at Churchill Downs on May 28, which was her first start since a win in Delta Downs’ $75,000 Orleans Stakes last November. Following this win, she made her first start against graded stakes caliber in Belmont Park’s Bed o’ Roses Handicap (GIII) where she was fourth beaten only three lengths behind By the Moon and runner-up Wavell Avenue, both of which are in Saturday’s $1 million Breeders’ Cup Filly & Mare Sprint (GI) at Santa Anita.

“We thought that she was a cut below those horses but she ran great that day,” trainer Bret Calhoun said. “I think that the one-turn mile suits her real well so we like our chances.”

Some of Mayla’s better performances have taken place when she has been on the lead or sitting right off of the pace. Despite what could appear to be a lack of speed in Saturday’s event, she is not a sure bet to be sent out to the front.

“We’ll let (jockey) Miguel (Mena) figure that out,” Calhoun said. “She’s very versatile in that regard so if there’s no pace we can take advantage of that and let the pace paly out. If there is speed, she can sit in behind horses. We’ll just let her break form the gate and let her go from there. Those one-turn miles can run quick down the backside a lot.”

The 4-year-old son of Alert, who won last year’s edition of Churchill Downs’ Twin Spires Turf Sprint (GIII) on the Kentucky Derby undercard, has the most accomplished résumé in the 11-horse field, which appears to be a deep one for its condition. The turf sprint also features the likes of Hogy, a close second to last year’s Breeders’ Cup Turf Sprint (GI) victor Mongolian Saturday in the Woodford (GIII) at Keeneland last time out, and Latent Revenge, who won the Mighty Beau Overnight Stakes at Churchill Downs during the Spring Meet.

Power Alert (AUS) enters Friday’s race off a runner-up effort in the Belmont Turf Sprint Invitational where he set a quick pace before getting gunned down by Pure Sensation in the final stages of the six-furlong sprint.

“He ran really big for us last time out,” Lynch said by phone. “He’s shortening back up to five furlongs so this should be an ideal spot. I think he’s a little better at that distance. It does look like it’s going to be a really competitive race with lots of speed. Fortunately for us he’s got an outside post and we’ve got some speed to the inside. Hopefully he can come at them hammer and nail and kick in strong late.”

Should Power Alert (AUS) exit the race in good order, he will likely see stakes action at Gulfstream Park next time out, where he made his last trip to the winner’s circle in the Silks Run Stakes on March 12.

“He’ll be on his way south for the winter,” Lynch said. “He’s proven to be very effective when he races at Gulfstream Park so there’s a couple of stakes that we’ll probably point for.”

Lynch also reports that his front-running graded stakes winner Heart to Heart, who is a spotless 3-for-3 on the Churchill grass, is possible for the $100,000 River City (GIII) on Nov. 24, which he won last year.

“We’ll definitely nominate to the River City,” Lynch said. “There’s a race at Del Mar that same weekend (Grade II, $200,000 Seabiscuit Handicap on Nov. 26) and some other spots we could also point for so we’ve got some options for him.”

“This horse is not quite as precocious as McCraken,” Wilkes said. “McCraken is just on a different level. He’s a different kind of animal. This horse is a little more slow-maturing but he’s come along real well.”

The homebred son of Hard Spun is out of multiple Grade I winner Affluent, who proved herself at that caliber on both dirt and turf. This gives Wilkes confidence that his 2-year-old has potential to excel on turf.

“He may end up on the grass,” Wilkes said. “She (Affluent) won on both turf and dirt but we’ll get a race in him, get him started and see what he can do. We’ll find out, we’ll find out more about him after we run, that’s the key.”

SPECIAL POST TIMES ON FRIDAY AND SATURDAY – Churchill Downs will have special post times on Friday (2 p.m.) and Saturday (2:15 p.m.) so the races coincide but don’t overlap with a simulcast of the Breeders’ Cup World Championships from Santa Anita. Admission gates will open at 12:30 p.m. both days.

Churchill Downs will show the 33rd Breeders’ Cup World Championships on its massive Big Board between lives races. The Breeders’ Cup races at Santa Anita will run from 5:25-7:35 p.m. on Friday and 3:05-8:35 p.m. on Saturday.

General admission to Churchill Downs is $5 both days.

The UofL basketball meet-and-greet will take place between 1-3 p.m. in the Plaza.

Family Adventure Day is an affordable day of racing and fun for the entire family with 20 activities for kids under 12, including a petting zoo, miniature pony rides, rock wall climbing, video game truck, inflatables and face painting. Activities takes place on the Grandstand Terrace and in the Plaza near Gate 1.

Tickets for activities between 11:30 a.m. and 5 p.m. are $8 in advance at www.ChurchillDowns.com or $10 at the gate (children 2 and under are free), and $1 of every ticket purchased benefits Kosair Children’s Hospital through the Children’s Hospital Foundation. 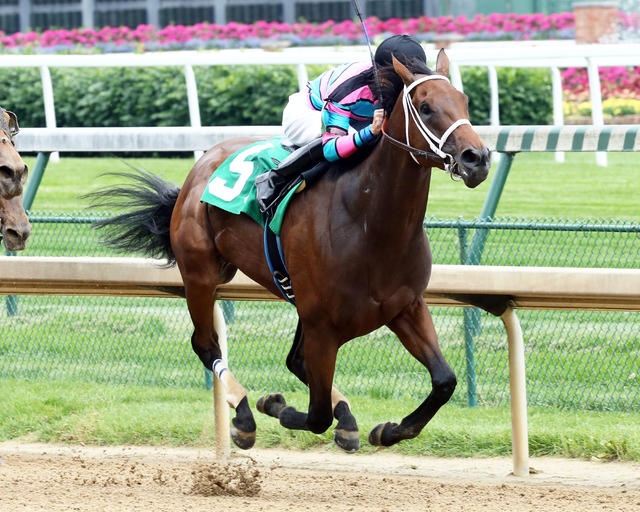