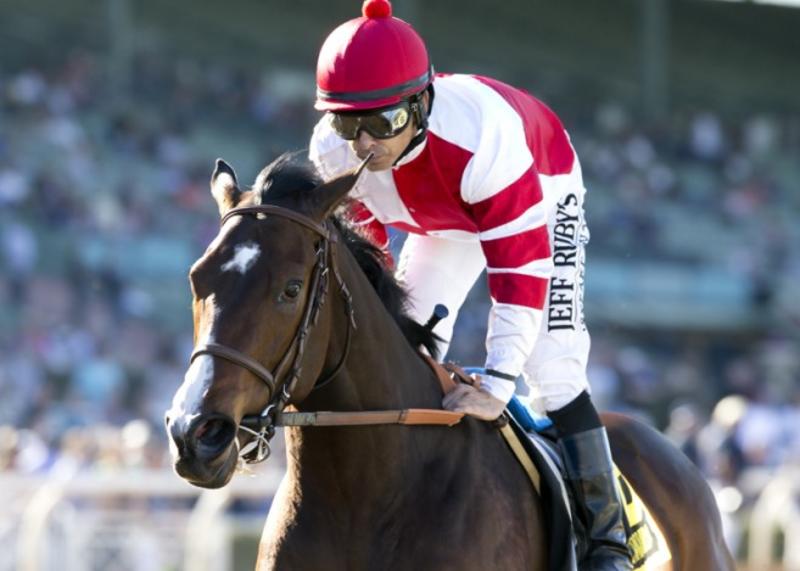 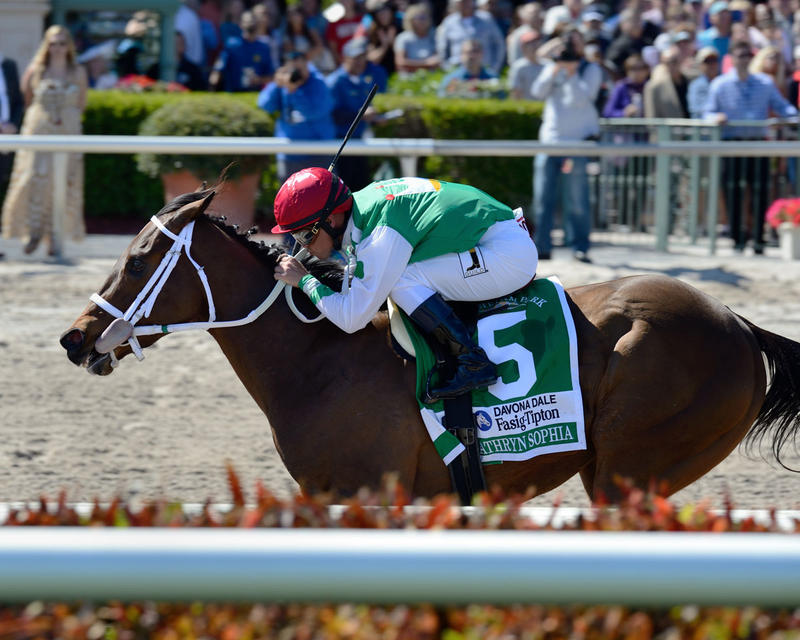 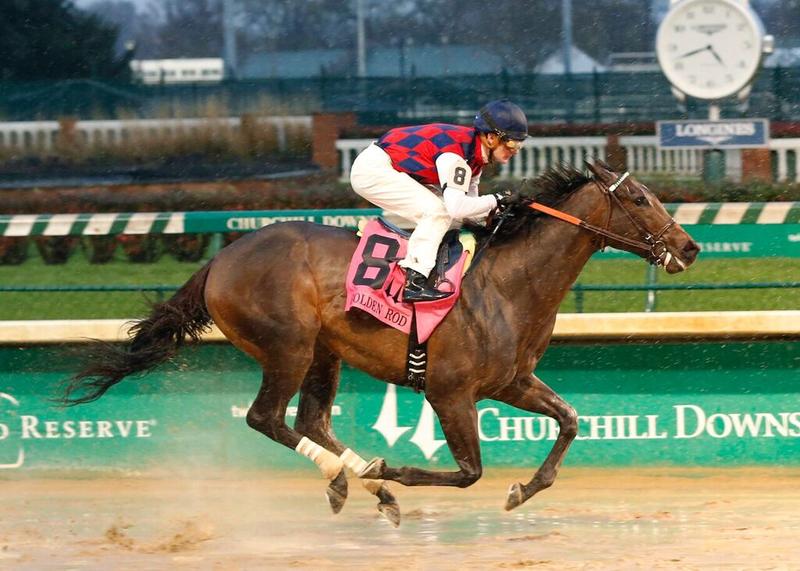 Fox Hill Farm Inc.’s unbeaten Songbird, the champion 2-year-old filly of 2015 and winner of the 14 Hands Winery Breeders’ Cup Juvenile (Grade I) at Keeneland, tops an accomplished and exciting roster of 112 3-year-old fillies made eligible during the early nomination phase to compete in the 142nd running of the $1 million Longines Kentucky Oaks (GI) at Churchill Downs Racetrack on Friday, May 6, the eve of the $2 million Kentucky Derby Presented by Yum! Brands (GI).

The nominated fillies are bidding to succeed Brereton C. Jones’ Lovely Maria, who earned the traditional mantle of Stargazer Lilies following her 2015 Kentucky Oaks victory witnessed by a record Oaks Day crowd of 123,763. Lovely Maria provided her owner and trainer Larry Jones with their third Oaks triumphs, respectively, and earned a first win in the race for veteran jockey Kerwin “Boo Boo” Clark.

The deadline for early phase nominations to the 2016 Kentucky Oaks, America’s top race for 3-year-old fillies was Feb. 20, and payment of a $200 was required to make each nominated filly eligible for the race. Total early nominations were down from 2015, when 154 3-year-old fillies were made eligible during the early phase and twolate nominations pushed the overall total to 156. But along with presence of an undefeated champion in Songbird, the roster of 2016 Kentucky Oaks nominees features the names of the most accomplished and promising members of the current 3-year-old filly crop.

A late nomination phase for the Kentucky Oaks is now underway – requiring payment of a $1,500 fee for each late nominee – and runs through Wednesday, April 13. With the close of the late nomination window, owners will have one more opportunity to make their fillies Oaks-eligible through a supplemental nomination process. Payment of a supplemental fee of $30,000 will be required at the Kentucky Oaks’ time of entry on Tuesday, May 3 to make a filly eligible to be entered and compete.

The Oaks field is limited to 14 starters and up to four fillies can be designated as “also-eligible” to start. Eligibility to compete in the Oaks is determined by points amassed during the “Road to the Kentucky Oaks” points series. Should one of more fillies scratch from the Kentucky Oaks before 9 a.m. ET on the day of the race, a filly or fillies from the “also-eligible” list that possess the highest respective point totals would be allowed to take the open spot, or spots, in the Kentucky Oaks starting gate.

The 1 1/8-mile Kentucky Oaks is run each year on the eve of the Kentucky Derby and, like its partner race, has been run annually with interruption since the 1875 race meet at the historic track first known as the Louisville Jockey Club. The Oaks has grown to be the centerpiece of spectacular day that celebrates fashion, food, celebrity and fun that features a focus on women’s health issues and outreach. Churchill Downs and national charity partner Bright Pink® join forces on Oaks Day to promote breast cancer and ovarian health outreach. Along with its renewal of its main event, Kentucky Oaks Day 2016 also will feature the eighth annual renewal of the emotional Survivors Parade Presented by Kroger – an on-track, pre-race parade featuring 142 cancer survivors – along with the popular tradition of the “Pink Out,” in which all Oaks Day attendees are encouraged to incorporate the color pink into their Oaks Day attire.

The 142nd running of the Longines Kentucky Oaks will be telecast live on NBCSN.

Eclipse Award 2-year-old filly champion Songbird, who is trained by Thoroughbred racing Hall of Famer and three-time Kentucky Oaks winner Jerry Hollendorfer, has a perfect record in five career races and launched her 3-year-old campaign with an impressive 6 ½-length victory in the $300,000 Las Virgenes (GII) at Santa Anita. That triumph under Hall of Fame jockey Mike Smith was Songbird’s fourth graded stakes victory – a total that includes other Grade I wins in Santa Anita’s Chandelier and the Del Mar Debutante – and boosted the career earnings by the daughter of Medaglia d’Oro to $1,682,000.

Stonestreet Stable LLC and Mathis Stable LLC tied as top owner with four Oaks nominees, owned either alone or in partnership. Godolphin Racing LLC and LNJ Foxwoods each nominated a trio of fillies to the race.

Hronis Racing’s Stellar Wind, fourth to Lovely Maria in the 2015 Kentucky Oaks, earned the Eclipse Award for the year’s outstanding 3-year-old filly and became the third consecutive Oaks participant to secure that honor. The John Sadler-trained daughter of Curlin joined 2014 Oaks winner Untapable and Beholder, a three-time champion and runner-up to Princess of Sylmar in the 2013 Oaks, in that string of championships.

The Oaks had earlier produced a string of four consecutive champions in Blind Luck (2010), Rachel Alexandra (2009), Proud Spell (2008) and Rags to Riches (2007), and Rachel Alexandra and Rags to Riches went on to defeat males in Triple Crown races in their next starts. The former held off Kentucky Derby winner Mine That Bird in the Preakness (GI). Rachel Alexandra also collected Grade I wins over males in Monmouth Park’s Haskell Invitational and Woodward at Saratoga on her way to the Eclipse Awards for Horse of the Year andchampion 3-year-old filly. Rags to Riches edged eventual two-time Horse of the Year Curlin in a dramatic 2007 renewal of the Belmont Stakes (GI) in a championship year that also included Grade I wins in the Las Virgenes and Santa Anita Oaks.

CLICK HERE  for a PDF roster of nominees to Longines Kentucky Oaks 142. 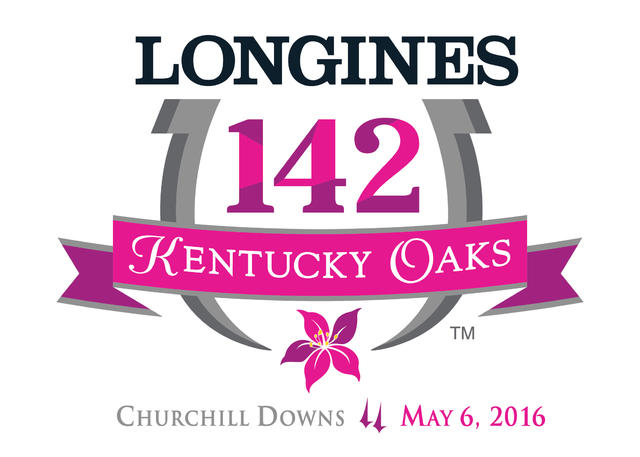