Change of Control Slides Up Rail to Win Thursday Feature

Roddy Harrison’s Change of Control slid up the inside rail to collar eight-time stakes winner Morticia with a sixteenth of a mile to run and held off late runs by Midnight Fantasy and Miss Gossip (IRE) to win Thursday’s $76,814 feature race at Churchill Downs by three-quarters of a length.

Trained by Michelle Lovell and ridden by Colby Hernandez, Change of Control ran five furlongs over a firm Matt Winn Turf Course in :56.37.

Morticia, the classy 6-year-old mare who was making her first start since a runner-up effort in the Franklin County (Grade III) at Keeneland last October, was fresh off the layoff and led the field of nine fillies and mares through early fractions of a :22.09 and :44.46. Change of Control rated in fourth for most of the way before a patient Hernandez waited for room to open along the inside.

Morticia finished fourth and Girl Knows Best, the 8-5 favorite after a recent stakes win at Gulfstream Park, was sixth.

“This was a tough, tough race when entries came out,” Lovell said. “There were a lot of talented fillies and mares in this field and Colby gave her a perfect ride getting through on the rail.”

“We are so excited about this filly,” Lovell said. “She gave us an awesome stakes win last year at Churchill (in the $100,000 Mamzelle) and tries so hard every time she runs.”

Racing returns Friday with a nine-race card topped by a trio of allowance races, including a stout seven-furlong sprint for 3-year-olds and up that goes as Race 7. A talented overflow field of 12 will go to post, including 4-year-old Hog Creek Hustle who won last year’s $400,000 Woody Stephens (GI) on the Belmont Stakes undercard. 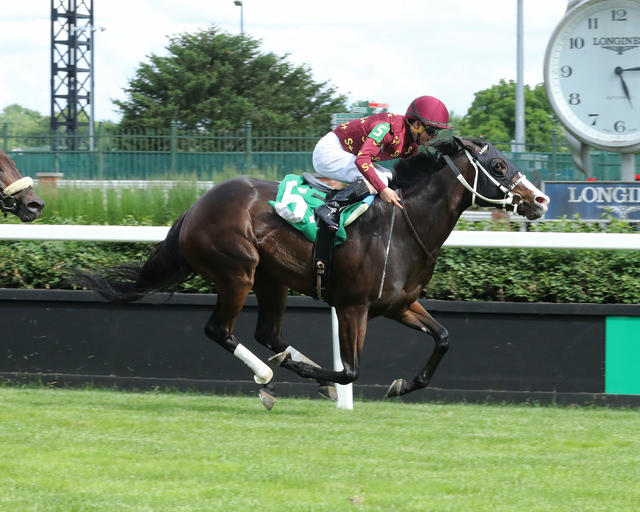