Three Diamonds Farm’s Chimney Rock, the runner-up in last fall’s Breeders’ Cup Juvenile Turf Sprint (Grade II), collared pacesetter Jack and Noah (FR) in deep stretch to win Sunday’s $58,309 feature race at Churchill Downs by a head. Four Wheel Drive, who won last fall’s Juvenile Turf Sprint at Santa Anita, broke tardy from the gate as the 3-5 favorite and never recovered on his way to a seventh-place finish in the field of 12 three-year-olds.

Chimney Rock covered the 5 ½ furlongs on a firm Matt Winn Turf Course in 1:04.27. The 3-year-old Louisiana-bred son of Artie Schiller won for the third time in nine career starts, and the $29,680 first prize boosted his earnings to $410,105.

Trained by Mike Maker and ridden by Jose Ortiz, Chimney Rock drew even with pace-setting Jack and Noah (FR) after leaving the turn, and the two matched strides down the stretch with Chimney Rock narrowly prevailing inside the final yards.

“Today’s race definitely suited him better and he ran as he did when he was a 2-year-old,” Maker said. “I think this is the start of bigger things down the road for him but we know what he likes to do.”

After the race, Four Wheel Drive’s jockey Manny Franco said, “We didn’t have the trip today. I tried to get him around horses and was just a little flat.”

Racing at Churchill Downs will continue Thursday at 1 p.m. (all times Eastern) with a 10-race program highlighted by a third-level allowance worth $85,000. Klaravich Stables’ Front Run the Fed, winner of the Better Talk Now at Saratoga last summer for trainer Chad Brown, is the 8-5 morning line favorite in the overflow field of 10 older horses at one mile on turf.

All races will be televised on FS2 from 1-6 p.m. as part of FOX Sports’ “America’s Day at the Races” coverage. 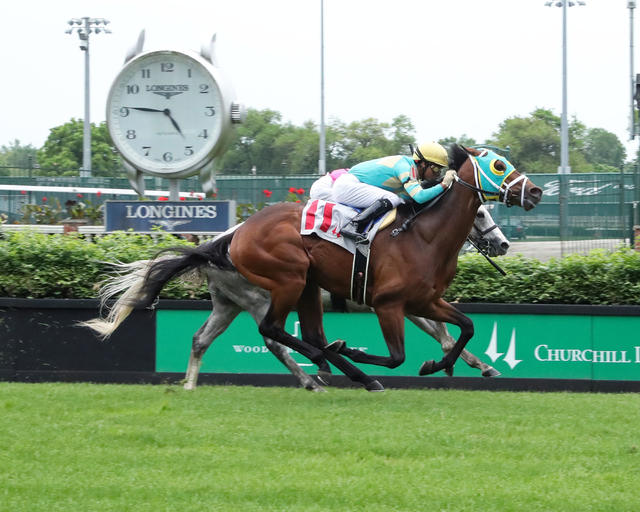