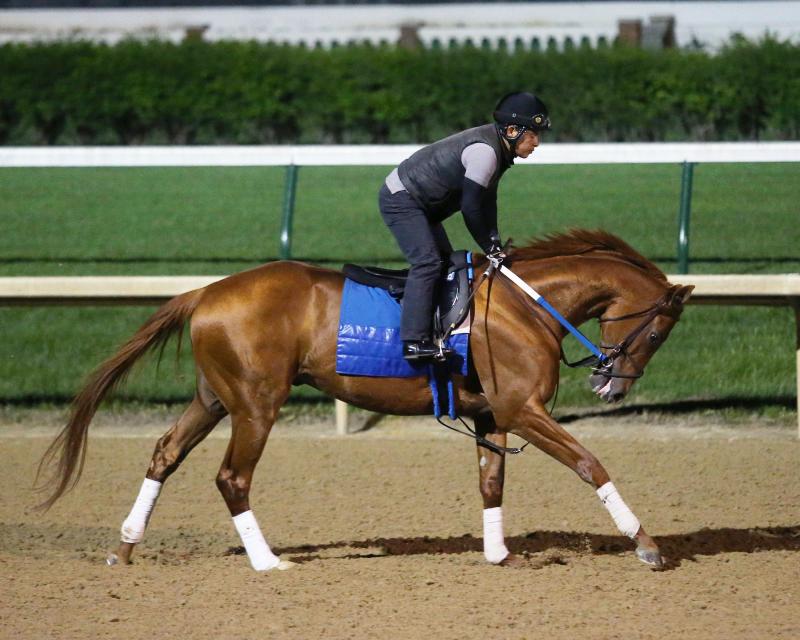 Winchell Thoroughbreds and Three Chimneys Farm's Gun Runner, show in an April gallop at Churchill Downs, prepared for a run in the Stephen Foster Handicap (GI) with a sharp five-furlong breeze in :59.80 on Monday. The Steve Asmussen-trained colt won the 2016 Clark Handicap (GI) and was runner-up to Arrogate in this year's Dubai World Cup (GI). (Coady Photography, Churchill Downs) 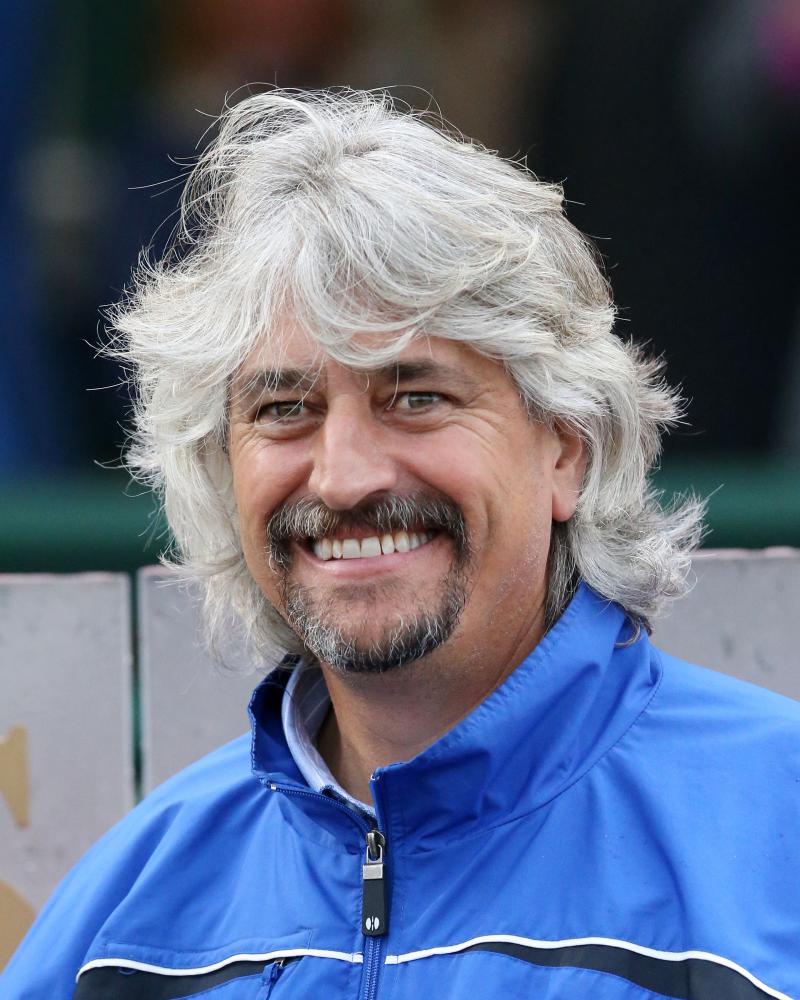 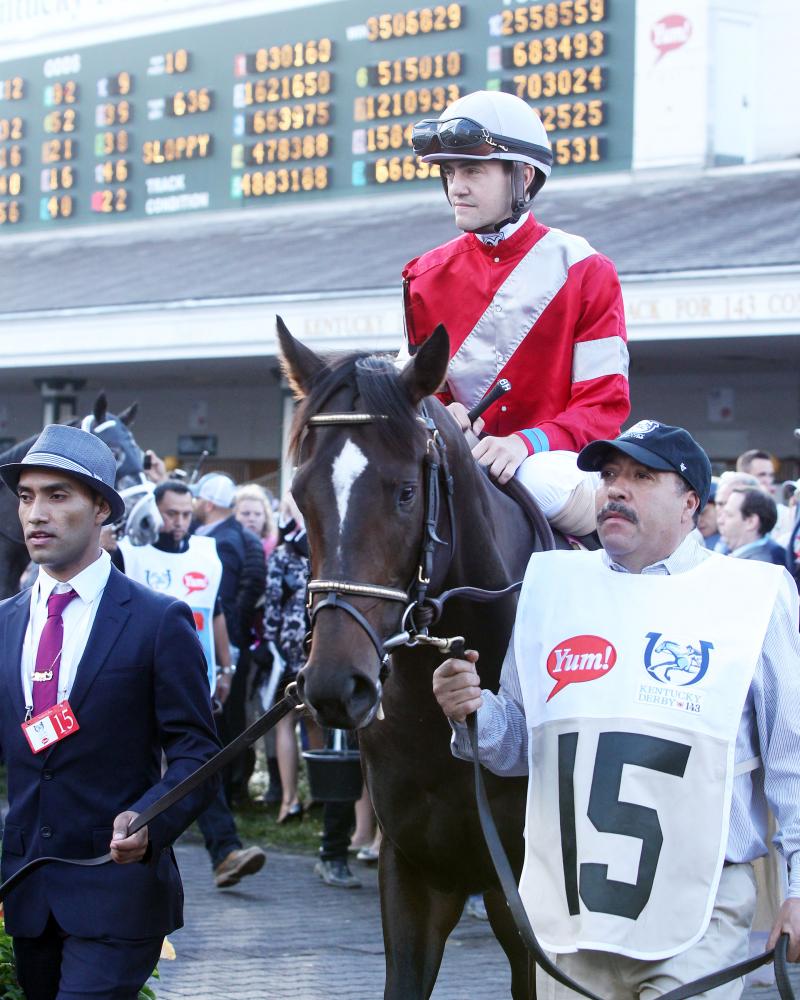 Gun Runner, with regular rider Florent Geroux aboard, started two-lengths behind workmate Tapsolute and finished about one length in front at the wire, according to Churchill Downs’ official clocker John Nichols. The Steve Asmussen trainee breezed through fractions of :12.20, :24.20, :36 and :47.80 before galloping out six furlongs in 1:12 and seven furlongs in 1:25.20.

Asmussen and Geroux both had late nights Sunday as they were traveling back to Louisville for Gun Runner’s breeze. Asmussen was in Grand Prairie, Texas to saddle Neck ‘n Neck (fourth) and Carouse (fifth) in Sunday’s Lone Star Park Handicap (GIII) and arrived back in Kentucky at 10:30 p.m. (all times Eastern). Geroux, who rode Souper Tapit to victory in Sunday’s Marine (GIII) at Woodbine in Ontario, Canada, landed in Kentucky around 12:30 a.m.

Gun Runner has a 14-7-3-2 record with $4,337,800 in earnings. The 4-year-old son of Candy Ride (ARG) has fared well over the Churchill Downs surface including a third-place finish in the 2016 Kentucky Derby (GI) and victories in the Matt Winn (GIII) and Clark Handicap (GI). Gun Runner will attempt to become the fourth horse to win the Clark Handicap and Stephen Foster Handicap – Churchill Downs’ signature races for older horses. Blame was the last horse to accomplish this feat in 2009-2010.

Both the Stephen Foster and Fleur de Lis will be televised on NBCSN from 8:30-10 p.m. as part of the 2017 “Breeders’ Cup Challenge Series: Win and You’re In, presented by Lane’s End Farm and America’s Best Racing” television schedule.

THE TRUTH OR ELSE TRIES TO TURN THE TABLES ON LIMOUSINE LIBERAL – Harold Lerner and Magdalena Racing’s The Truth or Else is preparing for a rematch against Limousine Liberal in Saturday’s $100,000 Aristides (Grade III), the popular six-furlong sprint at Churchill Downs for 3-year-olds and up.

“He ran a solid race in the Churchill Downs (GII),” Kenny McPeek’s assistant trainer Jeff Hiles said. “We were way out of it early and he closed ground late to only get beat three lengths (by Limousine Liberal).”

The Truth or Else started his 5-year-old campaign with a victory in Gulfstream Park’s Sir Shackleton Stakes. The son of Yes It’s True has a 29-6-3-6 record with $579,556 in earnings.

“It was very promising to see how well he closed ground in the Churchill Downs,” Hiles continued. “He’s trained great out of that race and I think there are some bigger races in his future.”

Limousine Liberal will be the likely favorite in the Aristides off of his Churchill Downs victory. The 2016 Breeders’ Cup Sprint fifth-place finisher is currently putting in his final Aristides preparations at trainer Ben Colebrook’s Keeneland base.

Other probable entrants for the Aristides are Abbaa, Manhattan Mischief, and Union Jackson.

Saturday’s program also will feature the $65,000-added Mighty Beau Overnight Stakes for 3-year-olds and up at five furlongs on turf. Latent Revenge is expected to defend his title.

DOWN THE STRETCH – Trainer “Buff” Bradley is one win away from 100 victories at Churchill Downs. Bradley has one entrant, Stomfield, in Race 4 on Monday at approximately 2:13 p.m. … Monday’s Memorial Day card features a $7,746 carryover in the 20-cent Single-6 Jackpot. The sequence starts in Race 6 at approximately 3:15 p.m. … In celebration of Memorial Day, all active and retired members of the United States armed forces were admitted free of charge. Also, Churchill Downs’ bugler Steve Buttleman will perform patriotic melodies following the “Call to the Post” for each race. … Next Sunday is the first Family Adventure Day of 2017. There will be fun for the entire family including bounce houses, a petting zoo and children can register to participate in a stick horse race on the turf course. 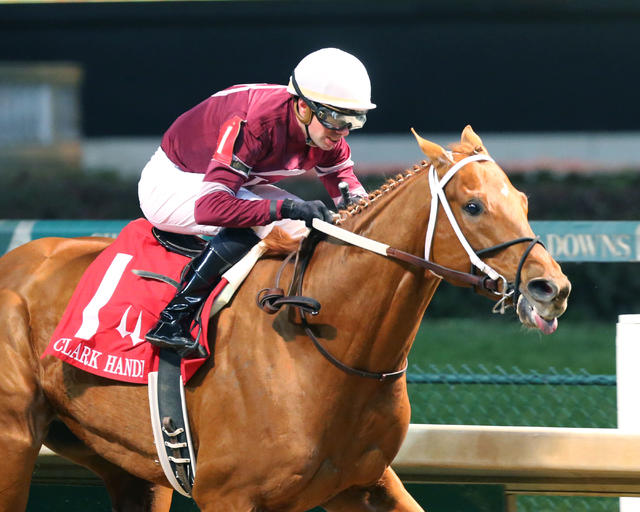