“At the beginning of the year, the Test was always the goal,” trainer Brad Cox said. “After we accomplished that goal, we set our sights on the Breeders’ Cup and how to get there. We figured the Dogwood was the best place to get her ready since it is in our own backyard and we didn’t have to ship anywhere. I think she’s ready for the Breeders’ Cup after that.”

“We could have easily gotten the track record but why push her when she was doing it so easily,” jockey Shaun Bridgmohan said. “As a jockey when you look over a horse mid-race who’s going :22 and :44, and she’s looking over to her competition like they’re nothing, you know the horse is special.”

Covfefe exited the Dogwood in good shape, according to Cox, and will return to training in a few days.

Street Band rallied from nearly 10 lengths back of early pace-setting Jaywalk and passed heavy favorite Guarana in late stretch to not only record the biggest victory in her young career but also gave her jockey Sophie Doyle her first Grade I score.

“It is an absolute thrill for all of the owners involved with (Street Band),” said Doyle, who will shift her tack to Keeneland next month. “I couldn’t be more proud of this filly. I’m so thankful for (owner/trainer) Larry Jones to have the faith in us to get to the top. Now, it’s on to the Breeders’ Cup.”

By winning the Cotillion, Street Band earned a berth to the $2 million Longines Breeders’ Cup Distaff held Nov. 2 at Santa Anita. The five-time winner is based in Jones’ Barn 28 at Churchill Downs.

Also returning to Churchill Downs Sunday morning from Parx was Allied Racing Stable’s $1 million Pennsylvania Derby (GI) runner-up Mr. Money, who could not hold off the late charge of Math Wizard in the 1 1/8-mile race. Assistant trainer Tom Morgan reported all was well with the Goldencents colt and his next race plans remain in flux.

STAKES PROBABLES – A trio of stakes events will headline the Downs After Dark Presented by Budweiser program next Saturday at Churchill Downs. The following are the probable entrants according to Assistant Racing Secretary and Stakes Coordinator Dan Bork:

Entries for the 11-race program will be drawn Wednesday.

‘CHURCHILL DOWNS TODAY’ TO AIR ONE HOUR BEFORE FIRST RACE – “Churchill Downs Today,” the track’s daily racing preview program, will air one hour before the first race of the day with on-track and simulcast host Joe Kristufek.

Kristufek will preview each of the day’s races and will be joined by a collection of fellow TwinSpires.com and Brisnet.com handicapping experts: Ed DeRosa, James Scully, Scott Shapiro and Brandon Stauble.

In addition to airing on-track, “Churchill Downs Today” can be seen on TwinSpires.com’s Churchill Downs video feed and will be streamed live on Twitter via @twinspires and Facebook via www.facebook.com/twinspires.

Downs After Dark on Saturday, Sept. 28 at 6 p.m.; Bourbon & Beats is Theme – The $250,000 Lukas Classic presented by Budweiser (Grade III), along with the $150,000 Ack Ack presented by GE Appliances (GIII) for milers and $125,000 Jefferson Cup (Listed) for 3-year-olds at 1 1/8 miles on turf are the featured events on Saturday, Sept. 28 – the lone Downs After Dark Presented by Budweiser night racing event of the September Meet and last one of the year. The event theme that evening will be Bourbon & Beats and guests are encouraged to wear shades of purple and stay on trend with autumn fashion as they celebrate a pairing of Kentucky sounds and spirits.

DOWN THE STRETCH – Congratulations to 40-year-old Irish-born jockey James Graham, who rode two winners Saturday – Saints’ Girl ($8.40) and Renaisance Frolic ($11.60) – to reach the 2,500-win milestone in his 17-year career in the United States. … Sunday’s 10-race program is part of Family Adventure Day Presented by Kroger. The day features more than 20 activities for children under 12 to enjoy. While the children enjoy the family activities, adults can hit the betting windows for a $29,003 Single 6 Jackpot carryover. First post is 12:45 p.m. … Happy Birthday wishes are extended to trainer Norm Casse, who turns 35 years-old Sunday. … Racing will continue Thursday for the final Twilight Thursday of 2019 with $1 Blue Moon drafts and select domestic beers, food trucks and live music from Owoso. First post for the eight-race card is 5 p.m. 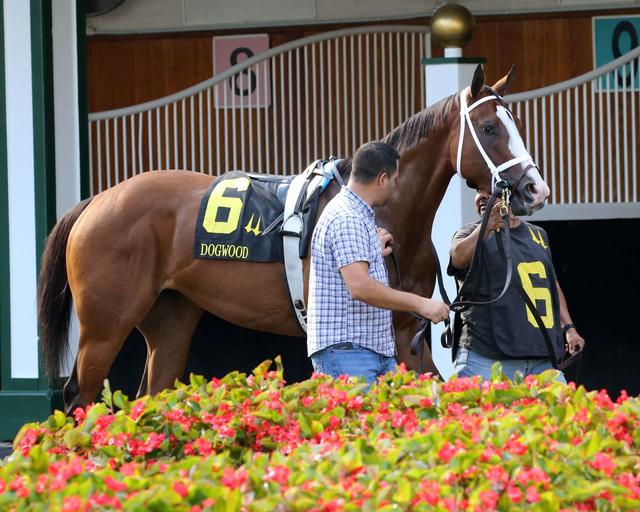