Jockey Florent Geroux is poised to attempt a stakes triple Saturday night at Churchill Downs as he rides a trio of top contenders in the $250,000 Lukas Classic presented by Budweiser (Grade III), $150,000 Ack Ack presented by GE Appliances (GIII) and $125,000 Jefferson Cup (Listed).

“It’s always fun to have lots of chances at winning big races,” Geroux said. “We’re on some solid horses for good connections and I think we’re going to be able to get the job done.”

The marquee race Saturday evening is the Lukas Classic where Geroux rides 5-2 morning line favorite Quip as the 4-year-old colt will attempt to rebound from an enigmatic ninth-place finish in last month’s $1 million Pacific Classic (GI) at Del Mar.

“We are still trying to figure out what actually happened in that race,” said the 33-year-old French-born jockey. “He’s run at many different tracks across many different dirt surfaces but he just didn’t handle things that day. It would be one thing if he came out of the race and we knew something was wrong but he just didn’t really run. If you notice that weekend, nearly no east coast horse ran well at Del Mar. Seeking the Soul never even got into the bit in the (Pacific Classic.) The way he’s been training in the morning for (trainer) Rodolphe (Brisset) makes me believe (Quip)’s back and we can just draw a line through that race.”

Owned by WinStar Farm, China Horse Club and SF Racing, Quip is a four-time winner through 10 starts with earnings topping $1.05 million. The Distorted Humor colt finished second in the $600,000 Stephen Foster (GII) in the Spring Meet at Churchill Downs.

The all-stakes Pick 3, which spans Races 7-9 will kick-off at 9:05 p.m. as Geroux will attempt to find the winner’s circle with Madaket Stables, Slam Dunk Racing and Michael Nentwig’s West Coast-invader Air Strike in the one-mile Ack Ack.

“I’ve ridden him in the past and he’s very tactical,” Geroux said. “He’s stepping up in distance but should like the one-turn here and it’s a class relief, too.”

Trained by Phil D’Amato, Air Strike arrived at Churchill Downs on Monday and is based in trainer Joe Sharp’s Barn 48.

Olympic Village will scratch from the Ack Ack in favor of the $750,000 Jockey Club Gold Cup (GI) at Belmont Park.

In the eighth race, Geroux will attempt to give Hoffman Family Racing’s Mick’s Star his second-consecutive victory as he stretches out in distance for the 1 1/8-mile Jefferson Cup on the Matt Winn Turf Course.

“Last time at Kentucky Downs he really dug in to win,” Geroux said. “He’s run some very game races when he’s been able to get on the lead and last time we were able to do that.”

Trained by Tom Amoss, Mick’s Star is the co-third choice on the morning line odds at 5-1. The son of Point of Entry won his first two starts on the dirt prior to switching surfaces to the turf.

DeROSA HANDICAPS SATURDAY SINGLE 6 MANDATORY PAYOUT – Churchill Downs’ 20-cent Single 6 Jackpot, which totaled $67,885 at the start of Friday’s 10-race program, will be paid out on Saturday night. The mandatory Single 6 Jackpot payout – part of a spectacular evening of racing under the lights for “Downs After Dark” presented by Budweiser – will span Races 4-9 starting at 7:26 p.m. (all times Eastern).

Ed DeRosa of Brisnet.com offered his handicapping thoughts on Saturday’s six-race sequence with the following:

Churchill Downs’ 20-cent Pick 6 with a 15% takeout will have a mandatory payout on Saturday night, and the challenging sequence concludes with a trio of stakes in which the morning line favorites in all three look opposable.

The Ack Ack at a one-turn mile is the first stakes (and first leg of the late Pick 5) but fourth leg of the Pick 6. #4 Thirstforlife is the 3-1 morning line favorite and a vulnerable one at that. Obviously the last can be forgiven considering he lost the rider, but bottom line is he is only as fast as anyone else in the race.

#8 Timeline returns from a nearly 10-month layoff and looks dangerous first time for trainer Steve Asmussen if ready. #5 Mr Darcy is 10-1 morning line and likely worth that price off a 102 Brisnet Speed Rating going six furlongs last out, and he has a pair of wins at this one-mile distance. #6 Mr. Jagermeister is the speed of the field and riding a three-race win streak among six wins in his last eight starts. Mr Freeze prepped for this against Mr Darcy and couldn’t hold off that foe in his first start in seven months but could benefit from the stretch out here. #3 C Z Rocket is another exiting a race with Mr Darcy and like Mr Freeze could improve second off the layoff.

The Jefferson Cup is the penultimate leg of the Pick 6 and kicks off the late Pick 4. #6 Tracksmith is the 3-1 morning line favorite and another who has not shown enough talent relative to the field to merit backing at a short price. Interestingly enough, #5 Faraway Kitten—second choice on the morning line at 7-2—is even slower and thus worse value than the favorite.

Unfortunately, going for deeper prices just yields more questions than answers. #1 Scars Are Cool was fastest last out, but that was in getting drilled in the Travers, and this is his turf debut. #2 Spectacular Gem was disqualified after winning a mile stakes gate-to-wire last out, and nine furlongs appears a reach even as he could be lone speed under James Graham. #3 Corruze was the put-up winner in the aforementioned Spectacular Gem race and retained Lanerie. #4 Mick’s Star has never been fast enough but has shown speed and keeps jockey Florent Geroux, who does have some pedigree (Point of Entry-Medaglia d’Oro) to work with. #7 Rijeka could enjoy the stretch out and is the logical closer here at a nice price (10-1 morning line). #8 Clint Maroon raced well in lone nine-furlong start, which could bode well for his stalk-and-pounce style.

For the Lukas Classic—aka the payoff leg of the Single 6—I’m going with the opinion that the West Virginia Governor’s Cup is a key race. The third-place finisher has already returned to win a big-money stakes (albeit on turf), and that bodes well for the gaudy 104 Speed Rating earned by winner Silver Dust (runner-up Kulkulkan received a 103). With #7 Pioneer Spirit and #4 Quip in the race, both Mountaineer horses should get to run their races.

Speaking of Quip, he is the 5-2 morning line favorite, and like the other favorites we have discussed he is only as fast as the other contenders in this field at best. Complement that with him taking a step backward last out, and he is not even usable here as the likely shortest price.

We will use the other three horses we have mentioned along with #10 Mocito Rojo, who won another Governor Cup last out—the one at Remington Park.

Follow @EJXD2 on Twitter, and watch Churchill Downs today streaming live @TwinSpires for full discussion of Saturday night’s card, including all of the mandatory payout Single 6

The Single 6 Jackpot challenges bettors to have a single winning wager with six winners placed at the required minimum bet value in order to take down the jackpot. If there are multiple winning tickets, 90 percent of the day’s pool will be paid out while 10 percent will carry to the next live race day. If there are no tickets will all six winners, 100 percent of the pool will carry to the Single 6 Jackpot.

The entire Saturday night pool will be paid to the most winners of six races.

As part of Sunday’s Closing-Day program, the Single 6 will still be offered and will feature a mandatory payout.

Several Churchill Downs-based riders will be riding elsewhere this weekend, leaving Leparoux with 15 mounts over the final three days of the meet. Hernandez has seven mounts Friday but flies to California on Saturday to ride Seeking the Soul in the $300,000 Awesome Again (GI). He is slated to return Sunday for seven mounts.

“We’re holding on pretty tight right now,” Leparoux joked. “It’s been a really good meet so far and we’re hoping to finish strong over the next three days. It’s really anyone’s race with how close the standings are.”

Perennial leading rider Corey Lanerie sits in a tie for third with Miguel Mena with seven victories at the meet. Lanerie has 27 calls the final three days of racing while Mena has 15 mounts Friday and Saturday but will ride at Remington Park on Sunday.

Downs After Dark on Saturday; Bourbon & Beats is Theme – The $250,000 Lukas Classic presented by Budweiser (Grade III), along with the $150,000 Ack Ack presented by GE Appliances (GIII) for milers and $125,000 Jefferson Cup (Listed) for 3-year-olds at 1 1/8 miles on turf are the featured events on Saturday night– the lone Downs After Dark Presented by Budweiser night racing event of the September Meet and last one of the year. The event theme is Bourbon & Beats and guests are encouraged to wear shades of purple and stay on trend with autumn fashion as they celebrate a pairing of Kentucky sounds and spirits.

The evening’s entertainment highlights include a Silent Disco where guests can dance to music through wireless headphones in the Plaza featuring GlitterTitz DJZ, DJ S.Y.I.M.O.N.E and DJ Matt Anthony.

DOWNS THE STRETCH – There is a $67,885 carryover in the 20-cent Single 6 Jackpot Friday that will span Races 5-10. First post is 12:45 p.m. … “Inside Churchill Downs” will air Friday at 6 p.m. on ESPN 680/105.7. The one-hour horse-racing program will feature a preview of Saturday’s 11-race program. Those outside the Louisville area can listen at www.espnlouisville.com. … There will be a complimentary ice cream truck Saturday at the Stable Gate from 10-11 a.m. for all backstretch employees. … Sunday is the Stakes and Eggs Brunch in the Stakes Room. Tickets for the all-inclusive buffet can be purchased at www.churchilldowns.com. 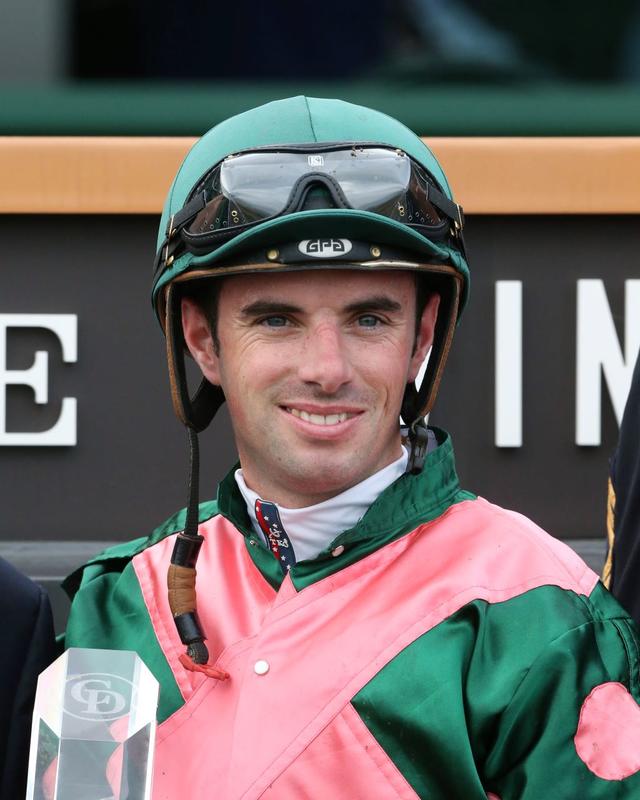