The 2019 racing season at Churchill Downs is entering the final stretch and several local jockeys and trainers have firmed up their winter plans with many staying in Kentucky the month of December to run at Turfway Park.

“It’s very exciting with the enhanced purses at Turfway,” trainer Mike Maker said. “It should make for some very good racing up there.”

Maker, who is a mainstay at the Florence, Ky. oval, will have some additional competition as he attempts to defend his 2018 Holiday Meet title. Trainers like Steve Asmussen, Cipriano Contreras and Dale Romans all plan to leave horses in Kentucky to run this winter at Turfway.

Several jockeys who plan to winter at Oaklawn Park in Hot Springs, Ark. plan to stay in Kentucky to ride at Turfway until their meet opens on Friday, Jan. 24, including Declan Cannon, Martin Garcia and Joe Rocco Jr.

“It should be some good racing at Turfway in December,” said Cannon, who won two races Wednesday at Churchill Downs. “Winning races at the end of the meet should hopefully help keep my name out there and business will be good in December.”

Jockeys Calvin Borel, Jon Court and Ricardo Santana Jr., will head to Oaklawn Park for their meet. Cannon, Garcia and Rocco are likely to join them following Turfway’s Holiday Meet.

Trainer Tim Glyshaw, who previously stabled at Fair Grounds, will ship his string of horses to Tampa Bay Downs.

BIG MONEY, BIG FIELDS FOR SATURDAY’S STARS OF TOMORROW II – Future stars will be in the spotlight on Saturday’s Stars of Tomorrow II program at Churchill Downs where all 12 races will feature 2-year-olds with 170 horses entered in the program with purses topping $1.5 million.

Saturday’s card features an average field size of 11.2 horses with 134 horses entered in the body of the race and 36 also-eligible entrants. Purses on the program total a whopping $1.558 million with an average of nearly $130,000 per race. The featured events on the program are the $300,000 Kentucky Jockey Club (Grade II) (Race 11) and $300,000 Golden Rod (GII) (Race 9). Both races will award 10 points to the winner on the Road to the Kentucky Derby and Road to the Kentucky Oaks, respectively.

On Saturday’s card, the highest-priced auction buy is $850,000 2018 Keeneland September Yearling Sale purchase Fight Fight Fight, who will break from the rail in Race 12, a one-mile maiden special weight.

One of the more difficult races for handicappers to tackle could be Race 8, a six-furlong maiden special weight where 11 of 12 horses entered will be making their debut.

The Kentucky Derby Sire Future Wager saw offspring of Constitution holding early favoritism at 5-1 with “All Other Sires” the second choice at 6-1.

To wager on the Kentucky Derby Future wager and Sire Future Wager, which closes Sunday at 6 p.m., visit www.twinpsires.com

FREE BRISNET PAST PERFORMANCES FOR WEEKEND STAKES – Brisnet.com will help the holiday handicapping with free past performances for each of Churchill Downs’ graded stakes on the closing Thanksgiving weekend.

The opening leg from Fair Grounds is a first-level allowance for 3-year-olds and up at 1 1/16 miles on turf (an oversubscribed field of 14), while the third leg is the $75,000 Richard R. Scherer Memorial for fillies and mares at 5 ½ furlongs on the grass (an oversubscribed field of 12). The second and fourth legs from Churchill Downs are the Golden Rod and Kentucky Jockey Club.

DOWN THE STRETCH – There were no winning tickets in Thursday’s 20-cent Single 6 Jackpot so there was a full carryover of $49,627 in Friday’s program. The sequence begins in Race 7. First post is 1 p.m. Sunday’s card will feature a mandatory payout to close the Fall Meet. … Highly regarded maiden winner Mr. Monomoy, the half-brother to Champion filly Monomoy Girl, returned to the work tab with a half-mile move in :49.40 Friday morning at Churchill Downs. Mr. Monomoy is likely to join Cox’s string at Fair Grounds. … Happy Birthday wishes are extended to outrider Greg Blasi, who turned 50 on Friday. 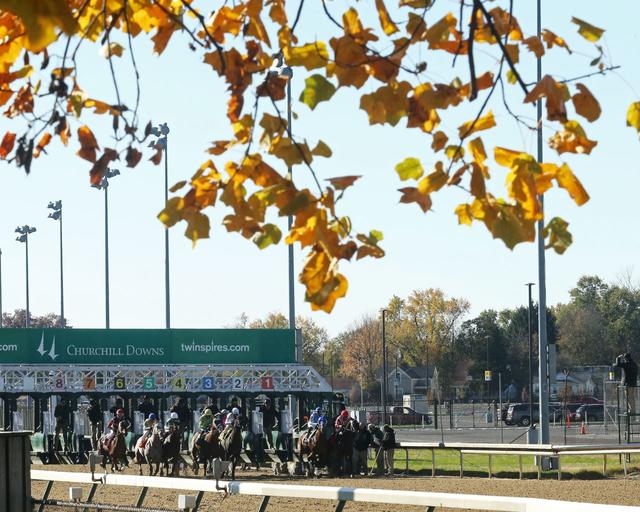