“His workout yesterday got very messed up and I needed that to be good in order to run him next week in Kentucky,” Mandella said via text Saturday morning. “I decided to stay here and just run him in the (Sprint Championship) Oct. 5.”

Omaha Beach recorded a seven-furlong move in 1:27.20 Friday morning at Santa Anita – his seventh work since returning to the track following a procedure to correct an entrapped epiglottis. The injury forced Omaha Beach to scratch from the Kentucky Derby (GI) as the morning line favorite.

Entries will be drawn Wednesday.

“We ended up giving him some time off following the Schaefer just because he’s run a pretty hard campaign in 2019,” trainer Brad Cox said. “This horse always seems finds trouble and he’s encountered that in a few of his starts. Two starts back at Evangeline (in the Evangeline Mile Stakes) he really got into a tough spot on the front end and I decided to run him back quickly in the Schaefer. He’s really been full of himself training for the Lukas and just doing great in the morning.”

“We’re definitely going to target the Breeders’ Cup after that,” Kenneally said. “We’re very proud of his effort that day to overcome adversity as he did after encountering trouble in the turn and to close ground as much as he did. He definitely passed the two-turn test and I think he’ll fit very well in the Breeders’ Cup Juvenile.”

Scabbard, a 2-year-old son by More Than Ready, broke his maiden at first asking at Churchill Downs in late June. The chestnut colt finished second in the $200,000 Saratoga Special (GII) behind the Jimmy Jerkens-trained Green Light Go.

Families are encouraged to bring the kids to Churchill Downs for a day of racing and family activities including pony rides, inflatables, a petting zoo, stick horse races on the turf course, face painting and more.

The theme is “Be Creative!” and special happenings include interaction with the Kentucky Department of Agriculture’s Mobile Science Activity Center; artwork with mural and conceptual artist Resko; arts and crafts with Side by Side Studio; a mobile recording studio with AMPED: The Academy of Music Production, Education and Development; and a meet-and-greet with Elsa, Superman and Churchill Charlie.

Tickets for adults and children age 3 and up are $10 when purchased online in advance at ChurchillDowns.com ($12 at the gate), and include unlimited access to all kid-friendly activities through 5 p.m. Churchill Downs is also offering a Family Four Pack that includes four Family Adventure Day tickets, four family meals in the Family Adventure Day area and two racing programs for only $48 (a $64 package includes reserved box seats).

‘STAKES AND EGGS’ SUNDAY BRUNCH – On Sundays throughout the September Meet, Churchill Downs is offering a special “Stakes and Eggs” brunch special in the Stakes Room.

The $48 package for adults and $25 package for children includes a seat in the Stakes Room on the fourth floor of the Clubhouse and all-you-can-eat access to the brunch menu that includes an omelet station, scrambled eggs, biscuits and country gravy, French toast, hot brown, carved country ham, crispy bacon, sausage patties, hash brown potatoes with peppers and onions, fresh fruit, garden vegetables, breakfast breads and a chef’s dessert display.

‘CHURCHILL DOWNS TODAY’ TO AIR ONE HOUR BEFORE FIRST RACE – “Churchill Downs Today,” the track’s daily racing preview program, will air one hour before the first race of the day with on-track and simulcast host Joe Kristufek.

Kristufek will preview each of the day’s races and will be joined by a collection of fellow TwinSpires.com and Brisnet.com handicapping experts: Ed DeRosa, James Scully, Scott Shapiro and Brandon Stauble.

In addition to airing on-track, “Churchill Downs Today” can be seen on TwinSpires.com’s Churchill Downs video feed and will be streamed live on Twitter via @twinspires and Facebook via www.facebook.com/twinspires.

DOWN THE STRETCH – There is a $24,677 carryover in the 20-cent Single 6 Jackpot Saturday. First post for the 11-race program is 12:45 p.m. … The podcast of Friday’s episode of “Inside Churchill Downs” that featured trainer Brad Cox is available here: https://soundcloud.com/user-204761944/inside-churc.... … Racing this week on the Matt Winn Turf Course will be staged in Lane 3, 22 ft. from the hedge. … Trainer Monnie Goetz reported famous lead-pony Harley has returned to Churchill Downs following a “summer vacation.” The massive Appaloosa/Percheron/Belgian mix, who weighs more than 1,800 pounds, is working as a pony during morning training and Goetz hopes to have him back working the races by the fall. 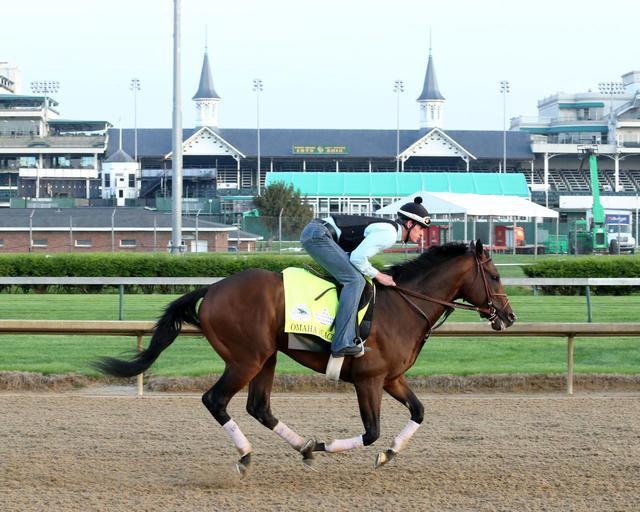