Hall of Fame trainer Steve Asmussen arguably recorded one of the most memorable wins in his career when 2-year-old colt Stellar Tap broke his maiden last month at Saratoga to vault the 55-year-old conditioner past Dale Baird as North America’s all-time leading trainer. Five weeks later, Stellar Tap is poised to tackle stakes company as the 3-1 favorite in Saturday night’s $300,000 Iroquois (Grade III) at Churchill Downs.

“We’ve been planning on that win for a long time,” Asmussen said. “It was better than anticipated. It was a wonderful moment with the entire family and we’ve relived it several times since.”

Owned by L and N Racing and Winchell Thoroughbreds, Stellar Tap broke his maiden by 5 ¼ lengths under jockey Ricardo Santana Jr. The Tapit colt is out of the Medaglia d’Oro mare Gioia Stella, who is the half-sister to graded stakes winners Nereid and Sea Queen.

Also entered in the Iroquois is Stellar Tap’s stablemate Guntown. Owned by Winchell Thoroughbreds, Guntown broke his maiden in his second start at Ellis Park. He is by the first crop of 2-year-olds from the former Asmussen-trained superstar Gun Runner.

“I couldn’t be a bigger fan of Gun Runner,” Asmussen said. “I am surprised how good they are so soon. They trained really well in spring and continue to develop. Our colt Gunite, who won the Hopeful, took a couple of times to break his maiden. I do think it’s a good sign the further they go, the faster they get.”

Saturday’s 1 1/16-mile Iroquois kicks off the “Road to the Kentucky Derby presented by Woodford Reserve” and awards the Top 4 finishers 10-4-2-1 points for the first Saturday in May. The winner of the Iroquois will also get an automatic berth into the $2 million Breeders’ Cup Juvenile (GI) on Future Stars Friday at the Breeders’ Cup. The Breeders’ Cup World Championships are scheduled to be held on Nov. 5-6 at Del Mar.

Hall of Fame trainer Todd Pletcher’s Iroquois Stakes entrant Major General and Pocahontas runner Goddess of Fire arrived to Churchill Downs from New York around 4:30 a.m. Friday. Jockey Javier Castellano is scheduled to be in Louisville on Saturday for the riding assignments.

FORMER CARDS PLAYER LEVITCH GIVES ‘SLAM DUNK’ OF THE NIGHT AT LOUISVILLE LIVE – The lone Downs After Dark presented by Budweiser on Saturday will bring together two Louisville sports legacies under the famed Twin Spires. Former Cardinals Men’s Basketball player David Levitch will be on hand Saturday evening and offer his handicapping advice during a special segment of “Churchill Downs Today.”

Levitch, who became the head men’s basketball coach of North Oldham High School following his graduation from the University of Louisville, enjoys spending his free time at Churchill Downs and racetracks throughout the country. On Saturday, Levitch will be interviewed by TwinSpires.com analyst Ed DeRosa on “Churchill Downs Today” and will join fellow Churchill Downs handicappers Joe Kristufek and Scott Shapiro during Race 2 for his “Slam Dunk” of the night.

To celebrate the theme of “Horses & Hoops,” fans are encouraged to wear Cardinals gear to this one-of-a-kind experience. Gates will open at 5 p.m. and the first race is 6 p.m. The spacious 30,000-square-foot Plaza adjacent to the saddling paddock will showcase pulsating live entertainment featuring the Cardinals’ men’s and women’s basketball teams on a portable court. The entertainment line-up will include official DJ for the Louisville Cardinals, DJ K-Dogg, who will spin game-time favorites from the Plaza stage.

“We took her up to Saratoga this summer (in the Grade I, $500,000 Ballerina) and she ended up fourth that day, beaten about three lengths for all of it by Gamine,” Foley said. “They went :23 and :45 in there and for whatever reason she was pretty far back with not a lot of pace. She got beat a neck for third but ran her race up there. We got her back to Churchill, which is home. She’s doing great, feeling good, licking her feed tub clean every day and I think will have no issues running back in just three weeks.”

Owned by Fred Schwartz’ Lloyd Madison Farms, Sconsin faced Lothenbach Stable’s Bell’s the One several times in her career including in the $110,000 Roxelana three months ago. In the 6 ½-furlong sprint at Churchill Downs, Bell’s the One passed Sconsin in deep stretch for a three-quarters of a length win. Four starts ago, Sconsin finished ahead of Bell’s the One in the $500,000 Derby City Distaff (GI) but both were ultimately defeated by Gamine.

“(Bell’s the One) is a really nice horse,” Foley said. “This field only drew five but it’s a tough enough group. We’ve beat her and she’s beat us. It’ll be a fun race.”

SEPTEMBER MEET HANDICAPPING INFORMATION – Racing fans have a one-stop shop for all of their Churchill Downs handicapping information on www.churchilldowns.com/handicapping.

The special section on the Churchill Downs website features free expert selections from handicappers Joe Kristufek, Ed DeRosa and Scott Shapiro along with links to special promotions on TwinSpires.com and Brisnet.com.

DOWN THE STRETCH – Friday’s 10-race program at Churchill Downs had a first post of 12:45 p.m. and a Derby City Jackpot carryover of $1,964. Racing on Friday will be broadcast on Fox Sports 2 from 12:30-5:30 p.m. … Trainer Bernie Flint was one win away from 500-career victories at Churchill Downs. He had one entry in Race 1 Friday. … The stakes history pages for the 22 stakes races held in the September and Fall Meets are available at www.kentuckyderby.com/media. … Churchill Downs Today” will be streamed one-hour before each race day on Churchill Downs’ Twitter and YouTube accounts. Fans can watch all of the races and bet on www.TwinSpires.com, the official wagering provider of Churchill Downs Incorporated. … Congratulations to Churchill Downs-based jockey David Cohen who was named as a finalist to the Southern California Jewish Sports Hall of Fame. 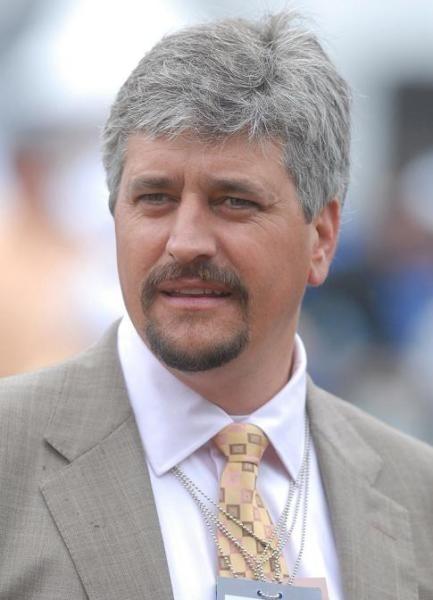