The Churchill Downs Racing Club, in partnership with Frank Jones Jr., made their triumphant return to Churchill Downs’ Woodford Reserve Winner’s Circle on Thursday with the Dale Romans-trained Rare Form, who scored a 1 ¼-length victory under Robby Albarado in a $97,000 first-level allowance event.

“It’s so thrilling to see so many happy people involved with the Churchill Downs Racing Club and, of course, Frank Jones who is like a second father to me,” Romans said. “We’ve had to be a little bit patient with this horse. He had a small injury in the fall so once we got him completely sound he’s turned into a really good horse.

“It’s awesome going around town and running into people involved in the Racing Club. The Racing Club is a great first step to get involved with ownership. Hopefully Thursday was the first of many trips to the winner’s circle for this group.”

The Churchill Downs Racing Club, which began in 2016, has five active clubs and more than 1,200 members. Including partnerships, the Racing Club horses have 14 wins with earnings of more than $1.2 million.

“The Racing Club has been awesome for racing,” Romans said. “Now there are 1,200 people who are involved in understanding horse ownership. You see people involved with the Churchill club joining so many other partnerships like West Point Thoroughbreds and Starlight (Racing). That’s the goal of the club and it is working. I’m very glad we can be a part of it.”

One of the stars of the Churchill Downs Racing Club has been Warrior’s Club, who has five victories including a win in the 2018 Commonwealth (Grade III) at Keeneland.

“This is going to be a really good test for us on Saturday,” trainer John Ortiz said. “We had an idea the race could come up pretty tough but this is going to give us an idea of how we really stack up with this type of competition. We thought about running her at Gulfstream (in the Grade II, $250,000 Princess Rooney on June 29) but I wanted to get her down there in plenty of time to get used to the track and in the end it didn’t make sense. So, we’ll lead her over from Trackside and see how she stacks up.”

“This could be one of those races that we’ll be talking about next year,” said trainer Pat Byrne, who will send out Silent Malice for his second-career start. “Our horse probably wants to go longer, like most of these in this race, but we’re getting to run for a $95,000 purse which attracts a lot of trainer’s top 2-year-olds.”

Ghostlore, owned by Anita Cauley Racing, will make his debut for trainer Ian Wilkes. The bay colt by Ghostzapper enters the race with a bullet five-furlong move in 1:00.60 from the starting gate on June 14.

“He’s a very nice colt from what he’s shown us in the morning,” Wilkes said. “He certainly has the pedigree to be a really good one. You really don’t know until you run them for the first time. Our hopes are high, though.”

Also featured in the field of eight juveniles is $400,000 Fasig-Tipton August Sale purchase Dennis’ Moment. Owned by Albaugh Family Stables, Dennis’ Moment has quickly risen to the top of the list of Romans’ top 2-year-olds.

“He’s done everything right to be a special colt,” Romans said. “It’s a long way to go until the first Saturday in May, 316 days to be exact, and that’s always our goal. We’re just getting a lot of our 2-year-olds started but he’s risen to the top of the class.”

“It was a beautiful breeze,” trainer Neil Howard said. “It’s going to be a true test to take on the boys but we have a very talented filly. We’ve always thought she belonged in these type of races and she proved that to us in the Woodbine Oaks.”

Entries for the Queen’s Plate will take place Wednesday. The field of registered Ontario-breds is expected to include Transylvania (GIII) winner Avie’s Flatter for trainer Josie Carroll as well as locally-based Tone Broke, the runner-up to King for a Day in Pimlico’s $100,000 Sir Barton Stakes for trainer Steve Asmussen.

DOWN THE STRETCH – Only six racing days remain at the 38-day Spring Meet. Closing day is Saturday, June 29. … Hall of Fame conditioner Steve Asmussen won two races Thursday and entered Friday’s 10-race program one win away from becoming only the third trainer to win 700 races at Churchill Downs. The others are all-time leader Dale Romans (728) and Bill Mott (714). Asmussen has seven entries on Friday: Race 1 (#3 Wasabi Girl, 5-2, and #2 Green Destiny, 7-2); Race 2 (#3 Data Driven, 5-2); Race 3 (#9 Pickens, 4-1); Race 4 (#12 Rose Larue, 4-1), Race 5 (#5 Summer Revolution, 6-1); and Race 8 (#11 Wicked Indeed, 9-2). … Brian Hernandez Jr. entered Friday six wins from 600 career victories at Churchill Downs … Friday’s 10-race program featured a massive $265,083 carryover in the 20-cent Single 6 Jackpot. The sequence covers Races 4-9 at 2:13 p.m. … Congratulations to trainer Scooter Dickey, who won Churchill Downs’ Barn of the Week. Dickey will receive a pizza party at his barn and recognition Friday in the winner’s circle following Race 4. … Friday’s “Inside Churchill Downs” at 6 p.m. on ESPN 680/105.7 will include an interview with Louisville Thoroughbred Society co-founder Gene McLean, who also runs https://thepressboxlts.com. Those outside of the Louisville are can listen live at www.espnlouisville.com. … Florent Geroux and Jon Court are scheduled to ride Owendale and Long Range Toddy, respectively, in Saturday’s $500,000 Ohio Derby (GIII) at Thistledown. Channing Hill will be at Monmouth Park on Saturday to pilot Zula Alpha in the $300,000 United Nations (GI). … Sunday is Family Adventure Day presented by Kroger. There will be more than 20 fun activities for kids under 12 in the Plaza, a family viewing area to watch live racing and special family ticket packages that start at $10 in advance (children under 2 are admitted free). The theme is “Get Outdoors” and families can learn about all that Louisville’s great outdoors has to offer with activities from The Parklands of Floyds Fork, Louisville Parks and Recreation, Kentucky Department of Agriculture and more. Additional event features include stick horse races, a petting zoo, mini pony rides, face painting, bounce houses, an obstacle course, corn hole, a bubble station, as well as a special area for children under 3. For more information or tickets, visit www.churchilldowns.com/tickets. 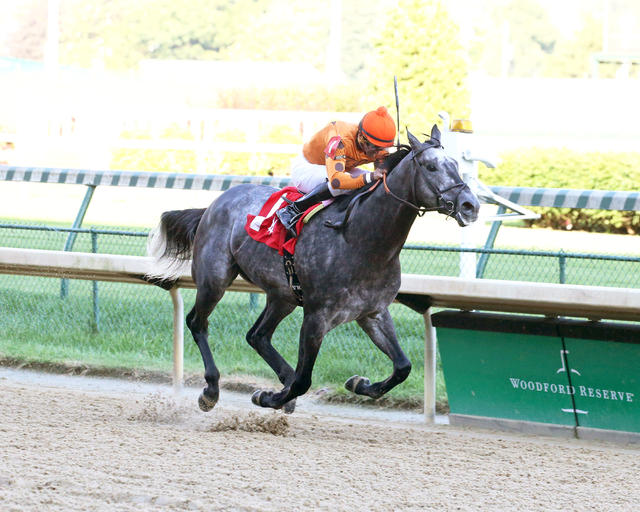