Godolphin’s 3-year-old homebred Banks Island sat behind the leading pack, circled four-wide leaving the final turn and grabbed the lead with a furlong to run en route to a 1 ¾-length win over American Butterfly in Sunday’s $81,585 allowance feature at Churchill Downs.

Ridden by Brian Hernandez Jr. and trained by Brendan Walsh, Banks Island clocked 6 ½ furlongs over a fast track in 1:16.64 to score his second win in six starts. The $46,212 winner’s share of the purse jumped his earnings to $104,562.

It was the son of Tapit’s first start in 170 days since breaking his maiden in New Orleans in late December.

“He’s a super tough horse,” Walsh said. “His race down at Fair Grounds was really impressive when it was taken off the turf. He had a setback in February and we really didn’t crank on him hard for this start today which made it more impressive the way he was able to win.”

Betting at Churchill Downs on Sunday totaled $7,838,147. Leading rider Tyler Gaffalione won four races on the 10-race card. Also, trainer Dale Romans won two races – the first with Lele ($9.20) and fourth with Clifton Park ($9.60) – to regain the crown as Churchill Downs’ all-time leading trainer from Steve Asmussen. It was the South Louisville native’s 739th and 740th wins, respectively – one more than Asmussen, who passed him for the title on Friday.

After dark days on Monday, Tuesday and Wednesday, racing at Churchill Downs will resume Thursday with a nine-race card at 1 p.m. (all times Eastern). There’s a $95,296 carryover in the 20-cent Single 6 Jackpot, which will cover Races 4-9.

Racing from Churchill Downs on Thursday will air on FS2 from 1-6 p.m. as part of FOX Sports’ “America’s Day at the Races” coverage. It also will be broadcast on FOX Sports Ohio from 3-6 p.m. 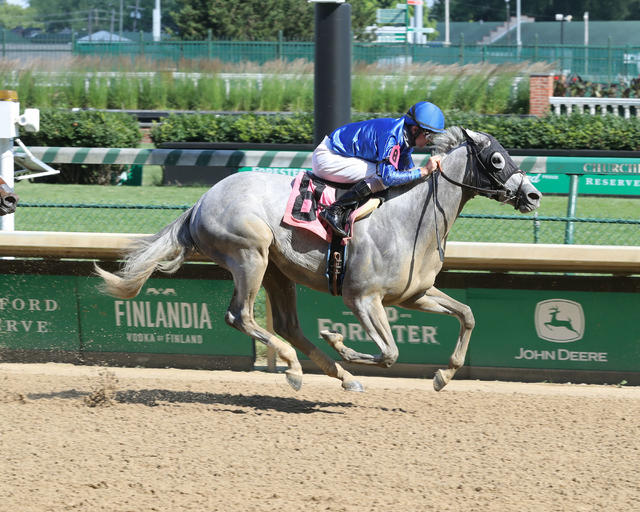