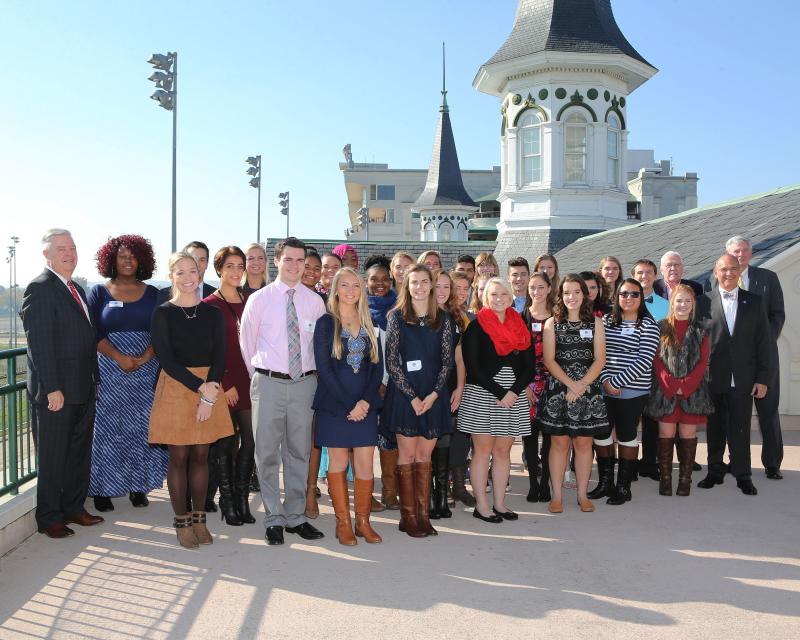 The members of 2016 Class of Churchill Downs Winner's Circle Governor's Scholars posed for photographers beneath the historic racetrack's Twin Spires during a reception on Wednesday, Nov. 16. (Coady Photography, Churchill Downs)

Twenty-nine outstanding high school seniors who make up the roster of the 2016 class of Churchill Downs Winner’s Circle Governor’s Scholars were honored for their participation in the program on Wednesday, Nov. 16 at Churchill Downs Racetrack.

The students – one representing each of the Kentucky House of Representatives and Senate districts in Jefferson County, Churchill Downs’ home county – were joined at the home of the Kentucky Derby by parents, guardians and school representatives in a reception in the Oaks Room of the Jockey Club Suites. The Churchill Downs scholars were later honored in small groups during post-race presentations in the track’s G.H. MUMM Winner’s Circle following the first six events on Wednesday’s racing program.

As part of the day’s activities, Churchill Downs officials presented a check for $15,000 to the overall Governor’s Scholars initiative and its Executive Director and Academic Dean Dr. Aris Cedeno.

“In the spirit of the Thanksgiving season and on behalf of the Kentucky Governor’s Scholars Program and its more than 28,000 alums, we thank Churchill Downs for our partnership that has funded the participation of nearly 500 scholars over the past 16 years,” Dr. Cedeno said. “This sponsorship demonstrates that Churchill Downs has the true soul of a community partner.”

The overall Kentucky Governor’s Scholars program, launched in 1983, places outstanding students from across the state on one of three Kentucky college campuses for five weeks during the summer prior to their senior year. The experiences and activities during those weeks are designed to enhance the role of those students as the state’s next generation of civic and economic leaders.