A big week lies ahead at Churchill Downs where the Louisville track will host the 24th renewal of the Claiming Crown on Saturday and three stakes events on Sunday.

Saturday’s 11-race program from Churchill Downs will showcase some of the nation’s top claiming-level horses competing for rich prizes beneath the historic Twin Spires. The series of eight races with starter allowance conditions features $1.05 million in prize money. In addition, registered Kentucky-breds will compete for an extra $10,000 to $25,000 in KTDF supplements.

One of the top horses scheduled to enter the Claiming Crown in the $100,000 Ready’s Rocket Express is Built Wright Stables’ well-traveled Beverly Park. The 5-year-old son of Munnings is slated to make his 26th start of the year and 43rd overall in his storied career. Trained by Lynn Cash, Beverly Park has won a national-best 12 races so far in 2022 (four more wins than Exit Right and Fortunate Friends, who each have eight victories) and banked $249,828.

“The plan is to run him (at Churchill) and twice at Keeneland prior to the Claiming Crown,” Cash said prior to Beverly Park’s Sept. 21 victory at Churchill Downs. “It’s a target we’ve been looking at all year.”

The plan didn’t quite come to fruition for Cash to run him twice at Keeneland. However, Beverly Park finished third, beaten a neck on Oct. 15 at Keeneland then shipped to Charles Town where he won a seven-furlong starter allowance by 4 ¼ lengths three days ago.

Entries for the eight claiming crown events will be taken Wednesday and Sunday’s card will be drawn Thursday.

In total there were four winners of Breeders’ Cup races that were previously victorious at Churchill Downs. Led by Malathaat’s victory in the $2 million Longines Distaff (GI), the other winners were Cody’s Wish in the $1 million Dirt Mile (GI), Elite Power in the $2 million Sprint (GI), and Wonder Wheel in the $2 million Juvenile Fillies (GI).

Cody’s Wish, who’s a perfect 4-for-4 at Churchill Downs, won his second-consecutive Grade I event. Previously, the Bill Mott-trained son of Curlin broke his maiden and won two allowances beneath the historic Twin Spires before a neck victory in the $175,000 Hanshin on July 4.

Mott also was victorious Saturday with Elite Power, who broke his maiden by nine lengths five months ago at Churchill Downs.

Top 2-year-old filly Wonder Wheel rallied from eight lengths off the early pace for a convincing three-length score in the Juvenile Fillies. Wonder Wheel broke her maiden at Churchill Downs in early June and parlayed that victory to a 6 ¾-length win in the $175,000 Debutante Stakes.

While $1 million Breeders’ Cup Turf Sprint (GI) winner Caravel never raced at Churchill Downs, her conditioner Brad Cox is a mainstay beneath the Twin Spires. The 5-year-old mare has been based with his Churchill Downs string several times, most recently in early September prior to shipping to Keeneland.

DOWN THE STRETCH – Racing was back in action Sunday at Churchill Downs for the fourth day of the 19-day Fall Meet stand. … Churchill Downs will have a five-day racing week Wednesday-Sunday with daily first posts at 1 p.m. Wednesday-Friday’s cards will have nine races while Saturday is scheduled for 11 and Sunday 10. … Ricardo Santana Jr. began serving a five-day suspension Sunday. … “Inside Churchill Downs” will have the penultimate show of 2022 Friday at 6 p.m. on ESPN 680/105.7. Fans can stream the one-hour program on www.espnlouisville.com. … For more information about the Fall Meet, visit www.ChurchillDowns.com. 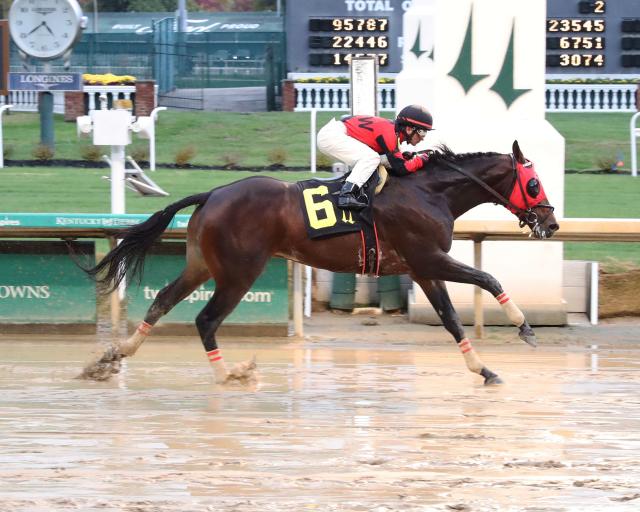