The combination of jockey Edgar Morales and trainer Tom Amoss has paid dividends over the last several months to horseplayers at Churchill Downs and the duo will team up once again with Michael McLoughlin’s $125,000 Ellis Park Juvenile runner-up Curly Jack in Saturday’s $300,000 Iroquois Stakes (Grade III), the kickoff of the Road to the Kentucky Derby.

“It’s great to ride for Tom (Amoss),” Morales said. “He and his staff do a tremendous job with their horses and we’ve been rewarded by them. Curly Jack seems to be improving with every start and that’s what you hope with a 2-year-old. He ran really well last time and has started to relax.”

In the Spring Meet, Morales and Amoss teamed up for six winners including five 2-year-old victories in maiden special weight competition. Morales could be on his way to earn the most purse money in his six-year-career. With about 3 ½ months remaining in 2022, the Puerto Rico native’s mounts have earned $3,047,649 which is nearly $600,000 shy of his career-best mark set in 2018.

Off the racetrack, Morales is just as busy. He and his fiancée Keely Sorrows recently announced they are expecting a baby girl in 2023.

Curly Jack is a 2-year-old son of Good Magic by the Roman Ruler mare Connie and Michael. The bay colt broke his maiden at first asking on June 2 at Churchill Downs then shipped to Saratoga to compete in the $175,000 Sanford (GIII) where he finished fifth behind top juvenile Mo Strike. In the Ellis Park Juvenile, Morales was able to relax Curly Jack off the pace and finished a head behind Top Recruit.

The 1 1/16-mile Iroquois will kick off the Road to the Kentucky Derby presented by Woodford Reserve. The Iroquois was carded as Race 9 of 11 with a post time of 4:55 p.m. First post Saturday at Churchill Downs is 12:45 p.m.

The Iroquois Stakes will award the Top 5 finishers points on a 10-4-3-2-1 scale toward a spot in the starting gate for the 149th running of the Kentucky Derby presented by Woodford Reserve (GI).

Wagering is available on the Iroquois and every race from Churchill Downs on www.TwinSpires.com, the official wagering provider of Churchill Downs Inc. and the Kentucky Derby.

PESSIN HOPES BELL’S THE ONE CAN HOLD OFF RIVAL SCONSIN IN OPEN MIND – Lothenbach Stables’ Bell’s the One will meet her rival Sconsin for the eighth time Saturday in the $300,000 Open Mind (Listed), and trainer Neil Pessin hopes she can avenge her defeat from last year’s race.

Bell’s the One got the better of Sconsin by 2 ½ lengths in the $200,000 Lady Tak one month ago. In last year’s Open Mind, Bell’s the One finished a half-length behind the Greg Foley-trained Sconsin in the Open Mind.

“She’s taken us on a lot of journeys and I’m so thankful for her,” Pessin said. “I was pretty confident with her going into the Lady Tak and I wasn’t holding back like a normally do talking about her.”

Bell’s the One has been dominate at the six-furlong distance throughout her career and has recorded eight of her 12 lifetime victories going three-quarters of a mile. Entering this year’s Open Mind, the 6-year-old daughter of Majesticperfection sports two swift half-mile moves in company with stablemate Fine Cotton. Two weeks ago, Bell’s the One recorded the best half-mile move of 106 horses to breeze at the distance when she cruised :47. Last week, Bell’s the One was the best of 90 other horses when she skittered four furlongs in :46.80.

Aside from Bell’s the One and Sconsin in the Open Mind, stakes-winning Joyful Cadence could loom large for Bill Simon’s WSS Racing and trainer John Ortiz. Joyful Cadence finished 1 ½ lengths behind Bell’s the One in the Lady Tak after setting swift opening quarter-mile fractions of :22.42 and :45.42.

In the Open Mind, the compact field of five fillies and mares features the eighth matchup between multiple graded stakes winning rivals Bell’s the One (6-5) and Sconsin (8-5). Joyful Cadence, who finished second to Bell’s the One in the $200,000 Lady Tak last month was made the 7-2 third choice on the morning line odds. The field is rounded out by five-time winning mare Club Car and Chilean-bred stakes winner Cheetara.

The sequence will close with the Pocahontas where Ellis Park Debutante heroine Justa Warrior was made the slight 4-1 favorite over debut winner Grand Love (9-2).

Fans can bet the all-stakes Late Pick 5 sequence on www.TwinSpires.com, the official wagering provider of Churchill Downs Inc. and the Kentucky Derby.

The winners of the Iroquois and Pocahontas will receive $30,000 toward their fees to enter the Breeders’ Cup. The second place finishers will be awarded $15,000 and third will receive $7,500.

General admission to Downs After Dark is $14 and includes an official program. Guests under the age of 18 will only be admitted to the track if accompanied by a parent or adult guardian. Limited premium dining packages are available starting at $82 per person. Outdoor-third floor box seats are on sale for $17 per person. Reserved seating can be purchased online at www.ChurchillDowns.com/Tickets.

DOWN THE STRETCH – Racing continued Friday beneath the historic Twin Spires with a 10-race program that got underway at 12:45 p.m. There was a $28,317 carryover in the 20-cent Derby City 6 jackpot after there were no winning tickets in Thursday’s sequence. … Trainer Rusty Arnold II was two wins away from 400 at Churchill Downs. The veteran horseman had one entry in Race 1. … Jockey Tyler Gaffalione will have a one-day suspension Friday. He’ll resume riding Saturday where he was named on seven horses in the body of the 11-race card. … “Inside Churchill Downs” will not air tonight because of the University of Louisville football game but will return to the airwaves Friday, Sept. 23. The one-hour program will air on ESPN 680/105.7 and stream live on the station’s website at www.espnlouisville.com. … For more information about the Churchill Downs September Meet, visit www.churchilldowns.com. 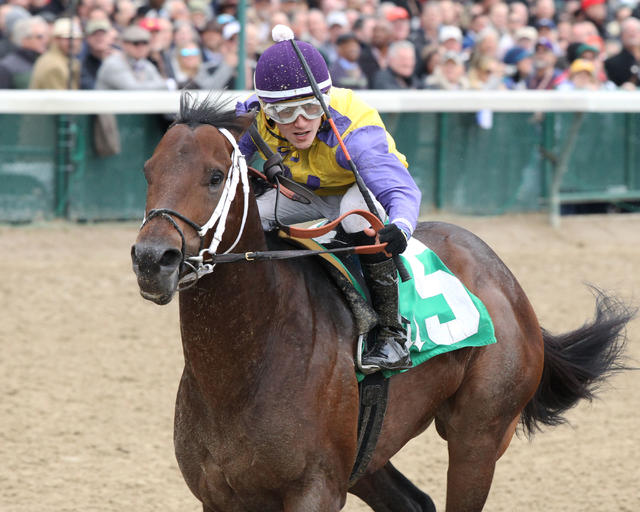