Five days removed from a fourth-place effort in the $2,395,800 Kentucky Derby Presented by Yum! Brands (Grade I), John Oxley’s Classic Empire continued his preparation for the May 20 Preakness (GI) with a jog under Martin Rivera at 6 a.m. (all times Eastern) on Thursday at Churchill Downs.

Classic Empire marked trainer Mark Casse’s fourth starter in the Kentucky Derby (Seaside Retreat, 2006; Prospective, 2012; Danzig Moon, 2015) but this year was different than the others, according to the trainer’s son.

“There was added pressure of being one of the favorites this year,” assistant trainer Norm Casse said. “We walk over with every horse wanting to win but it was a different feeling walking over for the Derby. We were walking with a purpose.

“It didn’t work out completely in our favor but this year’s Derby was really special. Our entire family, both sides, was there to cheer us on. That’s what the Derby is all about.”

Classic Empire is expected to gallop Friday morning at 6 a.m. and van to Pimlico on Sunday.

LOOKIN AT LEE, HENCE, GUNNEVERA TRAIN FOR PREAKNESS – Going to the track an hour after Classic Empire was Derby runner-up L and N Racing’s Lookin At Lee. The Steve Asmussen trainee galloped one mile and visited the starting gate and was followed 20 minutes later by Calumet Farm’s Hence, the 11th-place Derby finisher, who had a similar exercise.

After the break, Peacock Racing Stables’ Gunnevera jogged 1 ½ miles alongside a pony and then galloped an easy half-mile with exercise rider Victor O’Farrell aboard.

The younger Sano said he has been to Pimlico once before on Preakness Day when his father saddled City of Weston, who finished fourth in the 2013 Chick Lang Stakes.

The Unbridled Sidney, contested at five furlongs on the Matt Winn Turf Course, will go as the afternoon’s 10th race with a 5:21 p.m. (all times Eastern) post time. First post time Saturday is 12:45 p.m.

Trained by Neil Pessin, Nobody’s Fault has blossomed as a sprinter with a win and two seconds in three starts going 5½ furlongs. Corey Lanerie has the mount on Nobody’s Fault and will break from post position 10.

Unbeaten in two starts in 2017 at 5 ½ furlongs on the grass, Miss Gossip was a 2 ¾-length allowance winner at Keeneland in her most recent outing. Trained by Andrew McKeever, Miss Gossip will be ridden by James Graham and break from post position two.

Triple Chelsea, trained by Tony Granitz, was fourth in the Giant’s Causeway. Prior to that, going five furlongs, Triple Chelsea was third in the Ladies Turf Sprint at Gulfstream Park and had won the Lightning City Stakes at Tampa Bay Downs.

Alonso Quinonez has the mount and will break from post position 11.

SPRING MEET RACING RETURNS WITH TWILIGHT THURSDAYS, MOTHER’S DAY – After a spectacular opening week highlighted by the 143rd runnings of the Kentucky Derby Presented by Yum! Brands and Longines Kentucky Oaks, the Churchill Downs Spring Meet resumes with a week highlighted by the first of its popular Twilight Thursday programs and Sunday’s celebration of Mother’s Day at the historic track.

Twilight Thursday on Thursday, May 11 has all of the elements that have made the celebration a fan favorite during the past two years: live racing, live music, food from many of Louisville’s most popular food trucks and special drink prices. Admission gates open at 4 p.m. and the first of the Twilight Thursday’s eight races has a post time of 5 p.m.

Highlights of the first of the Spring Meet’s Twilight Thursdays on The Plaza include $1 beers from 5-8 p.m. and a roster of food trucks that include 502 Café, Holy Molé, Mark’s Feed Store, Red Top Gourmet Hot Dogs, Pollo, and Zoom Zoom Yum.

Twilight Thursdays are scheduled each week through June 29, and a special Twilight Wednesday is set for June 28.

TV-only Kentucky Derby viewership peaked at 19.1 million viewers from 6:45-7 p.m. EDT when Always Dreaming crossed the finish line 2¾ lengths ahead of Lookin At Lee – up 7% from the peaks of the past two Kentucky Derby races, won by Nyquist in 2016 and Triple Crown winner American Pharoah in 2015 (17.9 million for both).

Louisville, the home of the Kentucky Derby, topped the metered markets with a 39.0 rating/65 share (top 20 markets listed at bottom).

DOWN THE STRETCH – General admission is free today (Thursday) for guests who wish to cash winning tickets from Kentucky Derby Week. … Today’s racing program also marks the return of the track’s 20-cent minimum Single 6 Jackpot. The wager challenges patrons to pick the winners of six consecutive races with the potential of a big payout only if there is a single winning ticket. Bettors with the highest number of winners in each Single 6 Jackpot sequence will share 80 percent of the money wagered in each day’s pool, while the remaining 20 percent will be carried over to the next day’s wagering until there is one single winning ticket. … The memorial service for late Kentucky Derby-winning trainer Lynn Whiting is being finalized with the tentative date of Monday, May 15 at Churchill Downs. … Hall of Fame trainer Steve Asmussen is six wins shy from 600 career victories at Churchill Downs and trainer “Buff” Bradley is one win away from 100 victories at Churchill Downs. … Happy Birthday wishes are extended to jockey Didiel Osorio. The Panama native is celebrating his 23rd birthday Thursday. … Julien Leparoux will ride the Tom Albertrani-trained Sadler’s Joy on Saturday at Belmont Park in the $400,000 Man o’ War (GI). He also will pilot the Arnaud Delacour-trained Hawkmoor (Ire) in the $150,000 Beaugay (GIII) – her first race since finishing sixth in last fall’s Mrs. Revere (GII) at Churchill Downs. … With Kentucky Derby 143 in the rearview mirror, Churchill Downs will continue work on its $37 million capital project to deliver more than 1,800 new seats for the 2018 Kentucky Derby through the addition of new luxury suites, interior dining tables and third-floor Grandstand seats. The Starting Gate Suites capital project, which encompasses 77,250 square feet of new space on the north end of Churchill Downs Racetrack’s 147-acre facility, will feature three floors of individual suites along with dining and event space erected adjacent to the Jockey Club Suites. Foundation work began in January and ceased prior to the start of the Spring Meet. Steel is scheduled to be erected soon. Areas of the north grandstand will be closed, and a majority of the work will take place after training hours and dark days. … “Inside Churchill Downs,” co-hosted by Churchill Downs Racetrack’s John Asher, Darren Rogers and Kevin Kerstein, airs Saturday’s throughout the Spring Meet from 10-11 a.m. on ESPN 680/105.7. 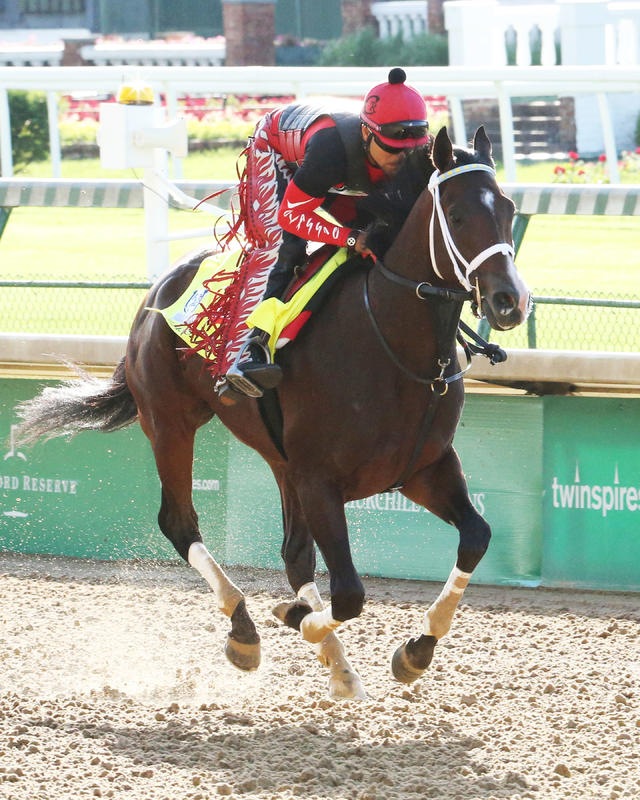