Two Hearts Farm LLC and Don Janes’ Fioretti tracked the pace down the backstretch, gained a slight advantage at the top of the stretch and stubbornly held on to win Saturday’s $100,000 Open Mind for fillies and mares at Churchill Downs.

Trained by Anthony Hamilton Jr. and ridden by Sophie Doyle, Fioretti, sent to post at odds of 14-1, won by a half-length over 23-1 outsider Ramona’s Wildcat in covering the six furlongs on a muddy track in 1:10.67 in the eighth running of the race.

Puntsville led the field of eight through a first quarter mile in :21.79 before Fioretti took over at the half in :45.30. Ramona’s Wildcat, who also was in close pursuit early, fought hard between horses but couldn’t catch Fioretti, who dug in under left handed urging by Doyle.

The victory was worth $60,140 and increased Fioretti’s earnings to $405,628 with a record of 29-6-7-2. Fioretti is a Kentucky-bred daughter of Bernardini out of the Cherokee Run mare Move Clickly.

It was another 2 ¼ lengths back to I’m a Looker, who was followed in order by $1.30-1 favorite Spelling Again, Unbridledexplosion, Kathballu and Puntsville. Athena was scratched.

Saturday’s race saluted the late Eugene Klein’s Hall of Fame filly Open Mind, the D. Wayne Lukas-trained winner of the 1988 Breeders’ Cup Juvenile Fillies (GI) at Churchill Downs who returned to the Louisville track the following spring to win the Kentucky Oaks. The New Jersey-bred filly was an Eclipse Award champion at ages two and three. A winner of 12 races and $1,844,372 in 19 starts, the daughter of Deputy Minister was enshrined in Racing’s Hall of Fame in 2011.

ANTHONY HAMILTON, JR. trainer of FIORETTI (winner): “She loves this track and if you look back at her past performances a lot of those big races had a little bit of moisture in the race track so we felt pretty good coming in here. The idea was that if she put up a big race here we would definitely eye the ($300,000) TCA (at Keeneland on Oct. 8) so that’s where we will likely head next”

SOPHIE DOYLE, jockey of FIORETTI (winner): “It was brilliant to be reunited with her again, it’s just nice to have that reconnection and that something that, going into this race, I was hoping for. As long as I could pick back up that reconnection with her, hopefully the both of us could get the best out of each other. She loves it here and I do too. I did my homework this time pretty thorough this time and we got it.”

RICARDO SANTANA, JR., jockey of RAMONA’S WILDCAT (runner-up): “She ran hard and she was getting into it. If she was running straight I think she would have won it. He’s a really nice filly.” 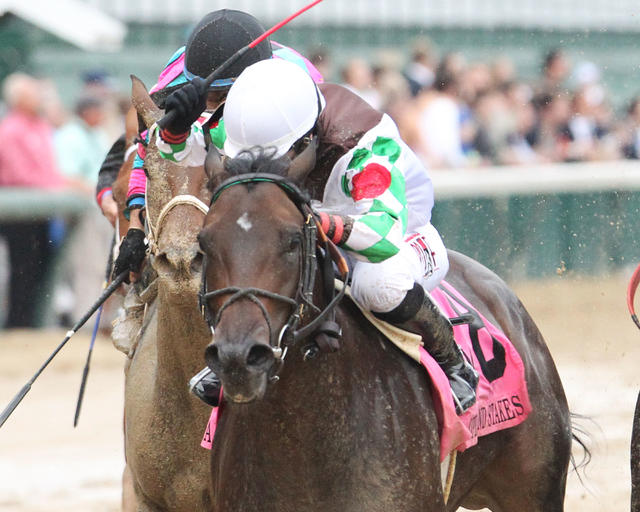