“He’s really taken to Churchill Downs well since he’s arrived,” said former jockey Juan Leyva, now the assistant to trainer John Sadler. “I absolutely love coming here. With 12 horses entering the Stephen Foster it didn’t come up easy by any means but we’re confident our horse is ready to run a big effort. It’s been great getting him in the (Churchill Downs Stakes) barn. He shows so much grit and determination every time he runs.”

Gift Box, who was made the 3-1 morning line favorite by veteran oddsmaker Mike Battaglia, won the $600,000 Santa Anita Handicap by a scant nose over McKinzie on April 6. The 6-year-old son of Tapit was transferred to Sadler’s care in mid-2018 from trainer Chad Brown. Since Sadler began training Gift Box, he’s reeled off a half-length score in the $300,000 San Antonio (GII) on Dec. 26 and, most recently, finished second to Vino Rosso in the $500,000 Gold Cup at Santa Anita (GI) on May 27.

Sadler is scheduled to arrive at Churchill Downs on Saturday for the Stephen Foster, according to Leyva.

Recent Belmont Stakes (GI)-winning jockey Joel Rosario is scheduled to fly into Kentucky to ride Gift Box, who drew post No. 6 in the field of 12 older horses. Rosario has been the regular rider of Gift Box since he was transferred to Sadler’s care.

Gift Box galloped about 1 ½ miles early Thursday morning at Churchill Downs prior to schooling in the paddock.

The Stephen Foster has been carded as Race 8 at 9:47 p.m. NBCSN will televise the race from 8:30-10 p.m. as part of its 2019 “Breeders’ Cup Challenge Series: Win and You’re In presented by America’s Best Racing” television schedule. Also, Horse Racing Radio Network (HRRN) will air live coverage on SiriusXM 156 from 8-10 p.m. and TVG will provide live on-site updates throughout the evening.

The 5-year-old mare by Medaglia d’Oro most recently finished third in the Apple Blossom (GI) after she finished second in the Azeri (GII) at Oaklawn Park to begin her 2019 campaign. Elate had a spectacular 3-year-old season with victories in the Alabama (GI) and Beldame (GI). Trained by Hall of Famer Bill Mott, Elate began her 4-year-old campaign with a 3 ¼-length score in the 1 ¼-mile Delaware Handicap (GII) and finished a neck behind Abel Tasman in the Personal Ensign (GI) before missing the remainder of 2018 with a minor injury to her left foreleg.

“She ran a credible race in the Apple Blossom but I don’t think it was her best effort,” Mott said. “I don’t know if it was her best distance. She’s been brilliant at nine furlongs throughout her career.”

For the fifth year in a row, the 1 1/8-mile Fleur de Lis is a Breeders’ Cup Challenge Series “Win and You’re In” stakes event, which means the winner will be guaranteed a berth in the $2 million Longines Breeders’ Cup Distaff (GI) on Nov. 2.

The Fleur de Lis – which means “Flower of the Lily” and honors the French symbol that is incorporated into the city of Louisville’s Flag – will be run as Race 7 at 9:12 p.m. (all times Eastern). It will be televised live on NBCSN from 8:30-10 p.m.

OUTSIDE DRAW NOT HURTING LANDEROS’ CONFIDENCE IN BOURBON RESOLUTION – An over-subscribed field of 14 horses will headline Saturday’s 1 1/16-mile Wise Dan (Grade II) on Churchill Downs’ Matt Winn Turf Course. One of the likely contenders in the field is Bourbon Lane Stable’s Ben Ali (GIII) winner Bourbon Resolution, who will test the turf for the first time while breaking from the far outside post under jockey Chris Landeros.

“It’s not the best post we could’ve gotten but it’s not the end of the world either,” Landeros said. “I’ll likely have to use a little bit of his speed to try and cross over before the run into the first turn. He’s naturally fast which will help us, and since the rail will be down that night, that is another positive. Races are different to ride on the turf with the rail out. You normally have trouble closing ground with the rail out as it tends to play to speed. The way Bourbon Resolution’s worked over this course gets me excited for his chances at running in the Wise Dan.”

Trained by Ian Wilkes, Bourbon Resolution is 10-1 on the morning line odds.

Trained by Bret Calhoun, Mr. Money stormed home to a 5 ¼-length score in the Pat Day Mile at odds of 7-1. The son of Goldencents found success cutting back in distance following a fifth-place effort in the Louisiana Derby (GII).

“All systems are a go for Saturday,” Calhoun said. “We think the Matt Winn will be a good next step for a summer campaign for Mr. Money. I’m not sure exactly how far he wants to run but I think the 1 1/16 miles will be fine.”

Mr. Money, who schooled in the paddock Thursday morning, drew post No. 6 in the field of seven with regular rider Gabriel Saez aboard.

“He’s just been so impressive all along,” Saez said. “His Pat Day Mile win was pretty incredible with that field. We still have so much confidence in his future.”

WINTER SUNSET MADE 7-2 MORNING LINE FAVORITE IN REGRET – Coffeepot Stables and Phillips Racing Partners’ Winter Sunset was made the 7-2 morning line favorite against 10 rivals in Saturday’s $150,000 Regret (Grade III) for 3-year-old fillies at 1 1/8 miles on the Matt Winn Turf Course.

Winter Sunset, a gray daughter of Tapit, recently finished third behind Concrete Rose and Newspaperofrecord in the Edgewood (GIII) on Kentucky Oaks Day. Trained by Wayne Catalano, Winter Sunset will be ridden by Channing Hill from the rail.

“The rail isn’t the worst place to be with her speed,” Hill said. “She’s so classy for a 3-year-old. She ran a good race (in the Edgewood). There were some very nice fillies in that race and we didn’t get away the best from the gate.”

EASTER MAN TRIES FOR FOUR WINS IN A ROW AS 5-2 FAVORITE IN PRESIDENT OF THE UAE CUP – Betty and Joseph Gillis’ 14-time winner Easter Man is slated as the 5-2 morning line favorite in a field of 10 purebred Arabians that were entered for Saturday’s $100,000 President of the UAE Cup Sponsored by the UAE Ministry of Presidential Affairs (GI).

The President of the UAE Cup, which has been part of a world-wide series of Arabian races for 26 years, is carded as Race 10 at Churchill Downs with a post time of 10:48 p.m.

Easter Man, a 7-year-old son of Burning Sand has reeled off three races in a row, including a one-length score in the Sheikh Zayed Bin Sultan Al Nahyan Cup Amethyst Jewel Stakes (GI) at Sam Houston in March.

Easter Man drew post No. 9 with East Coast-based rider Carol Cedeno scheduled to make the trip to Kentucky for the mount.

MEET LEADERS – Corey Lanerie began the week with a three-win lead in the Churchill Downs jockey standings, 27-24, over Miguel Mena. Julien Leparoux was in third with 22 wins. … Steve Asmussen was on top of the trainer standings with 20 wins over Eddie Kenneally and Mike Maker’s 12 victories. … Maggi Moss held a 6-4 win lead over Ken and Sarah Ramsey and Whitham Thoroughbreds in the owner standings.

DOWN THE STRETCH – There is a $94,419 carryover in the 20-cent Single 6 Jackpot that highlights the eight-race program for Twilight Thursday Presented by Blue Moon. The evening features $1 Blue Moon drafts, $1 domestic draft beer, food trucks, lawn games, one-on-one expert betting advice and live music on the Plaza Stage by Frankie Leo. First post is 5 p.m. … Hall of Fame trainer Steve Asmussen began Thursday’s card needing four wins to become only the third trainer in Churchill Downs history to have 700 victories beneath the Twin Spires. … Jockey Brian Hernandez Jr. was six wins away from 600 victories at Churchill Downs. … In honor of Flag Day on Friday, Churchill Downs is hosting a Military Appreciation Day. Active members and retired veterans will receive free general admission or a 25% discount on a Chef’s Table buffet and seat on Millionaires Row with a valid military I.D. … Churchill Downs is offering a special Father’s Day combo ticket offer for Sunday’s 10-race program. The Father’s Day combo includes a reserved box seat, official program, domestic beer or souvenir soda, and a hot dog for only $15. Visit https://www1.ticketmaster.com/event/16005572E3D31EA3?did=fathersday and select Father’s Day combo as a ticket type to purchase on Ticketmaster.com. Also available is the Stakes & Eggs Brunch in the Stakes Room for $57. 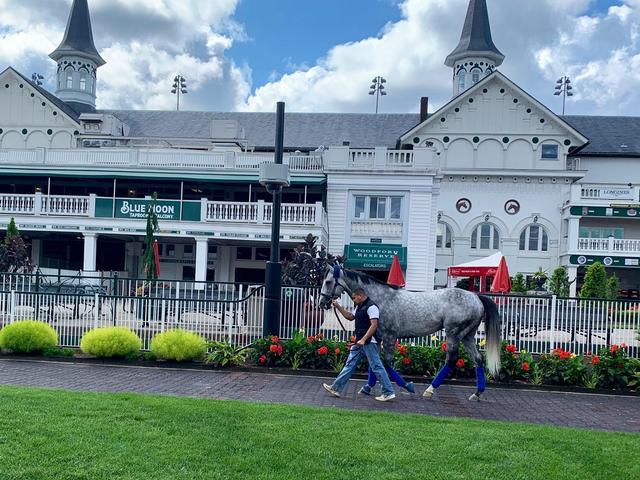