Grade I Winner Tom's d'Etat Clashes with Seven Rivals Including By My Standards, Owendale in Saturday's $500,000 Stephen Foster

“He has a history of running well off layoffs,” trainer Al Stall Jr. said. “He’s never really left form even after he was freshened at Fair Grounds this winter when we were getting him ready for the second half of the year. We had talked about the (one-mile) Blame as a prep but when the schedule was shuffled around, we just decided to stick with the plan to run him in the Foster.”

With the redesigned stakes schedule at Churchill Downs and NYRA, Tom’s d’Etat will be without his regular pilot Joel Rosario for the Stephen Foster due to his previous riding engagements in New York. Instead, Stall has installed one of his local go-to riders, Miguel Mena, to ride Tom’s d E’tat from post position No. 5.

Even though Stall opted to skip the Blame with Tom’s d’Etat, one of his main rivals in the Stephen Foster, Owendale, took full advantage of the May 23 one-mile race with a hard-closing half-length score under Florent Geroux. Trained by Brad Cox, Owendale (15-6-2-2—$1,129,185) will attempt to get the better of Tom’s d’Etat following his runner-up effort in last year’s Clark. Owendale, a 4-year-old son of Into Mischief, targeted some of the top 3-year-old events last year where he won a trio of Grade III events in the $200,000 Lexington, $500,000 Ohio Derby and $400,000 Oklahoma Derby. Owendale finished third in last year’s $1.5 million Preakness (GI).

“He was impressive coming back at one-turn (in the Blame),” Cox said. “He is a horse who I think will excel at two turns and his last race was just a prep as his first start of 2020. … He ran some tough races last year but appears to have taken a step forward now that he’s older.”

Geroux will be in the saddle on Saturday from post 8.

Gabriel Saez, who has been aboard By My Standards for all of his nine-career races, was named to ride in the Stephen Foster and drew post 6.

Also entered in the Stephen Foster is By My Standards’ stablemate Silver Dust (28-6-7-3—$787,577). Owned by Tom Durant, Silver Dust is a three-time graded stakes winner including a narrow victory in February’s $200,000 Mineshaft (GIII) at Fair Grounds. Silver Dust finished third, only three-quarters of a length behind Owendale, in the Blame.

Adam Beschizza will be aboard Silver Dust from post 7.

The Stephen Foster has had a strong influence on the Breeders’ Cup Classic and Horse of the Year honors. Four horses used victories in the Stephen Foster as part of their résumés in Horse of the Year campaigns: Black Tie Affair (1991), Saint Liam (2005), Curlin (2008) and Gun Runner (2017). In addition, two runner-ups were crowned Horse of the Year: Mineshaft (2003) and Wise Dan (2012). Also, Awesome Again (1998) and Blame (2010) completed same-year Foster-Classic doubles. Fort Larned won the Classic in 2012, and won the Foster the following year prior to a fourth-place run in his bid for a second Classic win.

Free Brisnet past performances will be available at www.churchilldowns.com/handicapping. 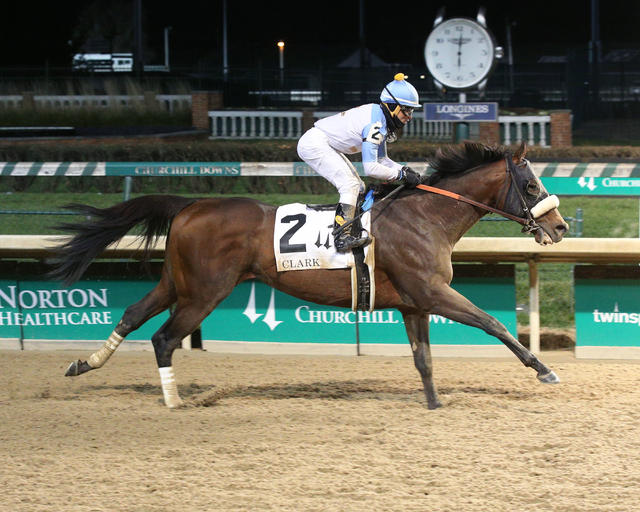