The victory was the second in the race for Baffert who took the 2011 running with First Dude.

McKinzie and Tom’s d’Etat alternated on the lead through fractions of :23.81 and :47.71. On the far turn, McKinzie dropped back along the rail as Bourbon Resolution challenged Tom’s d’Etat for the lead.

Approaching the head of the stretch, Smith moved McKinzie off the rail and immediately pounced on Tom’s d’Etat and drew off for the victory.

McKinzie is a 4-year-old Kentucky-bred son of Street Sense out of the Petionville mare Runway Model.

It was another half-length back to Silver Dust who was followed in order by Casino Star, Instilled Regard, Bourbon Resolution and Copper Bullet.

MIKE SMITH (rider of McKinzie, winner) – “You know that’s not something you do every day and nine times out of 10 it might not work. But he was telling me he wasn’t ready to go, he was kind of slipping around down there and I said let me give him a breather here and see what he does. And I kind of took a hold of him and he backed up nice and I said OK ‘come on, come on’ and all of the sudden he filled up with air and then I needed some room bad at that point because I was going to run over somebody. I did that on purpose. Again, nine times out of 10 it would never work and I would never do that but he was telling me to do it and I listened to him. You’d be surprised when you listen, things seem to pay off a lot more.”

BOB BAFFERT (trainer of McKinzie, winner) – “I knew if there was one horse who can’t get beat this week it was this guy right there. He was going to set the tone for us. He’s been training well but you have to win to get it going. Especially this horse. He’s had some tough breaks, tough losses. I was a little bit worried about him down the backside. Mikey (Smith) got in a hole on him and I thought ‘not again’. But I think we’re learning more about this horse and the way he wants to run. I think he wants to run that way. They had him in a good pocket but when he made that move I knew it was going to be over.

“We’re getting to know the horse and I thought he would put him on the lead today. But he said he didn’t feel comfortable being on the lead like that and really didn’t want to be on the lead. He was like riding a helicopter today so it’s good he got the job done. I love those kind of horses.”

SHAUN BRIDGMOHAN (rider of Tom’s d’Etat, runner-up) – “I thought my horse ran as hard he could. McKinzie was just really tough. He got the best of us today but I am super proud of his effort today.”

AL STALL JR. (trainer of Tom’s d’Etat, runner-up) – "He missed some training in New Orleans with an abscess in the foot. Shaun said Mike Smith was smooching and scrubbing the whole time and (McKinzie) wasn't responding, but our horse responded to him and got a little aggressive. He maybe overdid it a bit on the backside and second turn and he came up a little empty, but was obviously second-best."

JOHN VELAZQUEZ (rider of Seeking the Soul, third) – “He broke really sharp today. I thought he ran a very respectable race. I don’t know if he was too flat but I do think this race could help move his fitness level up.” 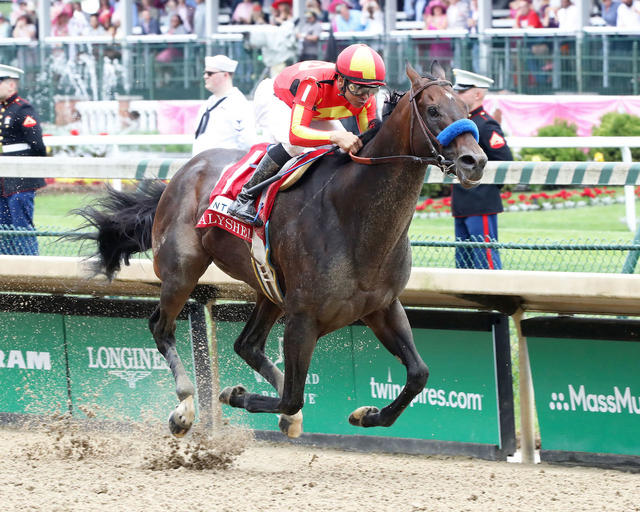