Miguel Mena, one of the winningest jockeys in Churchill Downs history and a two-time winner of the prestigious Stephen Foster Stakes, was killed in a pedestrian accident on westbound I-64 between Blakenbaker Parkway and Hurstbourne Lane in Louisville on Sunday night. He was 34, just days shy of his 35th birthday on Saturday.

“This news is absolutely shocking, terrible and heartbreaking,” said Churchill Downs Racetrack President Mike Anderson. “Our team is devastated to learn of Miguel’s passing. He was such a courageous rider who fought to overcome several challenges and adversity. We’ll miss his bright smile. Our deepest condolences are extended to his many friends, fellow riders and family, and our immediate thoughts are with his wife April and his daughters Naelah and Montserrat.”

Mena’s 481 wins at Churchill Downs rank 15th all-time. He won 16 stakes events locally – the last, of which, was his second triumph in the Stephen Foster (GII) aboard Tom’s d’Etat in 2020.

Mena, born on Nov. 6, 1986 in Lima, Peru, came from a family with roots in horse racing. His father Jose was a jockey and uncle Humberto is a trainer. As early as age 6, he’d go to the track with his father and dreamed of one day becoming a jockey. He began grooming horses at age 11, and when he turned 14 he attended Jorge Bernardini Yori Jockey School in Peru, which also produced Hall of Fame jockey Edgar Prado and Kentucky-based rider Rafael Bejarano.

Mena came to the United States at age 17 and recorded his first North American win as a jockey at Calder Race Course aboard Elian for trainer George Heath on Sept. 7, 2003.

Mena began riding regularly at Churchill Downs in the fall of 2006. While he never won a Churchill Downs riding title, he did finish among the top five riders in races won during eight local meetings, including second-place finishes at the 2008 Spring Meet and 2019 Spring Meet. The latter, which included 29 wins, was a tremendous accomplishment when considering what he endured the year prior.

Mena fell from a mount on March 15, 2018 at Fair Grounds which resulted in eight severe fractured bones in his ankle and heel. Following eight months of strenuous physical therapy, he returned to the saddle in September and rode his first race back from injury on Oct. 25, 2018 at Keeneland. The comeback was recognized in February 2020 when he was named winner of the first Randy Romero Pure Courage Award that recognizes an active jockey who has overcome adversity.

Unable to run following the severe ankle injury, Mena, an avid soccer fan and staunch supporter of Peruvian racing and its jockeys, was often seen riding his bike around the Churchill Downs stable area each morning to maintain his fitness.

His final ride was Saturday at Keeneland. 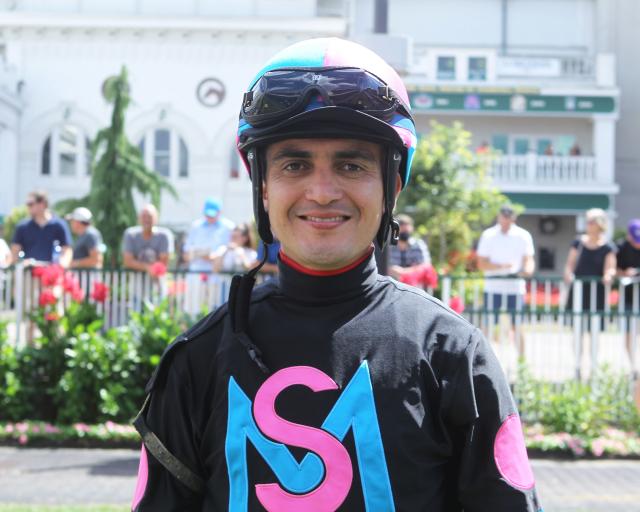