Jockey Quotes from the 143rd Running of the Longines Kentucky Oaks

Mike Smith, rider of Abel Tasman (1st) -- “Immediately after her second-place finish in the Santa Anita Oaks, we (Smith and trainer Bob Baffert) both realized she probably needed a slight blinker. She broke OK that day, but was not a 100 percent focused. She'd run for a sixteenth of a mile and then lose focus. The blinkers kept her from doing that today. I hit the front a little sooner than I wanted and I was afraid she'd pull herself up, but she stayed focused and galloped out even better. If you surround yourself with good people, good things happen. It's just like your mom always told you. I surround myself with Bob Baffert and other great trainers and owners and this is the outcome."

Julien Leparoux, rider of Daddys Lil Darling (2nd) – “I wanted a wait a little bit to get inside. She ran a big race.”

Jose Ortiz, rider of Lockdown (3rd) -- “I had a good position going into the first turn. I was just looking for a way to get to the rail since it’s been so good today. She gave me a good run.”

Kent Desormeaux, rider of Vexatious (4th) – “I got excited at the three-eighths pole. She really took off when I peeled her out from behind horses. She enjoyed the going, she gave it her best. I am hoping as she matures, she will get stronger and faster.”

Joel Rosario, rider of Salty (5th) – “She liked the track and ran well. We took a chance to go along the inside and got stopped a little a couple of times. She was running in the end. It was just a different track today. The winner was much the best. If I didn’t get stopped on the turn and turning for home, we could have run better but that’s how it goes sometimes.”

Corey Lanerie, rider of Sailor’s Valentine (6th) – “It was a perfect trip, sitting right behind the speed. She was moving very well over this track even though it was in the slop. I got excited turning for home but she just got tired late.”

Luis Saez, rider of Tequilita (7th) – “My filly was in a great spot. I ask for her run and she responded but the other fillies ran faster.”

Paco Lopez, rider of Miss Sky Warrior, (8th) – “We were right there second but when I asked my filly she didn’t like the mud.”

Luis Contreras, rider of Ever So Clever (9th) – “Perfect trip, no excuse. She just didn’t kick like last time.”

Mario Gutierrez, rider of Mopotism (10th) – “She broke OK but I didn’t think she liked the track very much.”

Flavien Prat, rider of Paradise Woods (11th) – “She didn’t break super sharp. She just wasn’t herself today. She never ran on a sloppy track before and she didn’t run good today so maybe that had something to do with it.”

Joe Rocco Jr., rider of Jordan’s Henny (12th) – “We really had a good trip. We sat behind the speed and she was still on the bit going into the second turn. I really got excited going for home because I thought we had a chance but she just flattened out.”

Brian Hernandez Jr., rider of Wicked Lick (13th) – “The way she warmed up, I thought she would run a good race. We took a lot of dirt, and that discouraged her a bit. It just wasn’t her day.”

Channing Hill, rider of Farrell (14th) – “It was disappointing. I didn’t think it (the sloppy conditions) would bother her but obviously it did. You never know with this game but that’s why you have to run them. She did everything else good but like the track.” 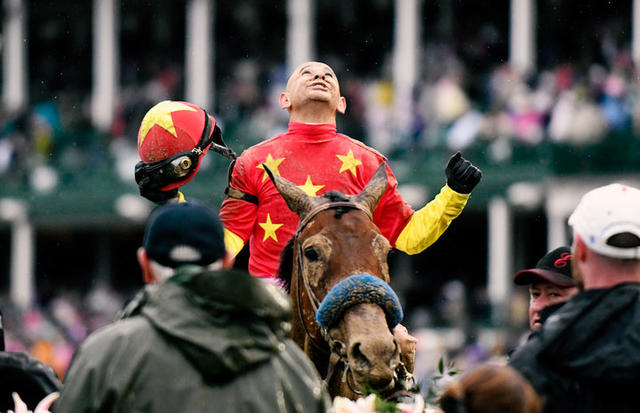